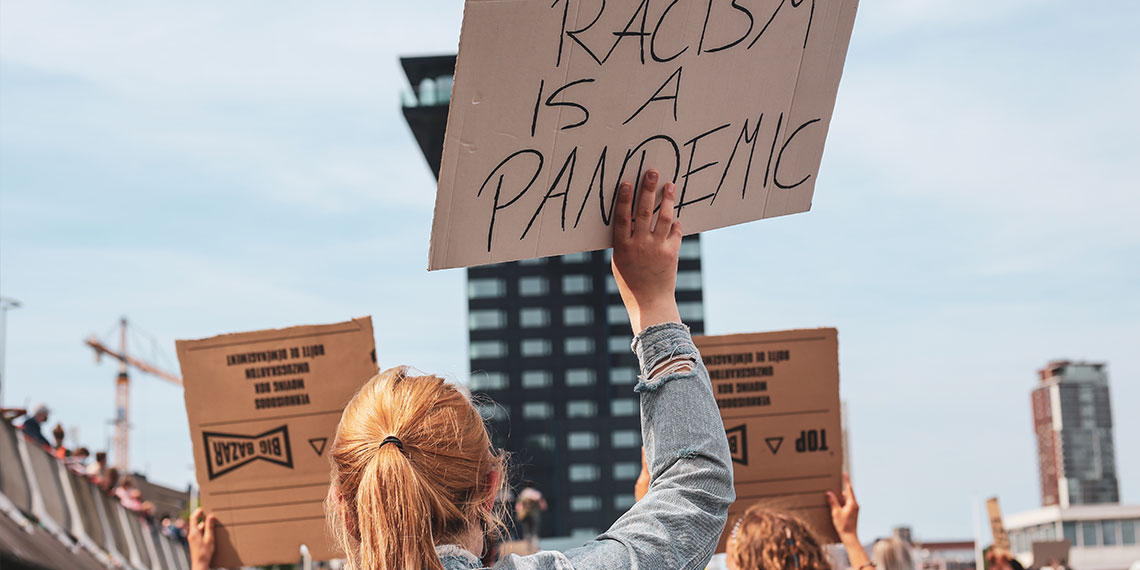 Learning Your Unconscious Biases Is The First Step Toward Overcoming Them

The past few weeks, the country has been making strides in supporting the Black Lives Matter movement and speaking out against police brutality and systemic racism. As a white woman, I’ll be the first to admit: I’m no expert on the matter, so I looked to an expert to point me in the right direction. While digging through YouTube in an effort to self-educate and understand, I came across diversity advocate Vernā Myers and her TED talk entitled “How to overcome our biases? Walk boldly toward them”. (It was published over six years ago, which says a lot about how far we haven’t come.) The inclusion strategist, who specializes as a cultural change catalyst, says that acknowledging our racism might be the best way to overcome it. Naturally, this is just one video, one talk, and one tiny step on my path toward self-education. But as I’ve searched for guidance and answers and action items, Myers’ discussion about just how dangerous and deadly our biases can be stood out. (On that note: I’m always looking for more, so drop your best TED talks or educational recs in the comments.)

In her 18-minute discussion, the activist outlines her own personal biases and explains how the only way to stop the spread and continuation of unfair treatment is to look within ourselves and be willing to change. “What are we gonna do about it?” She asked the audience. “That part of us that still crosses the street, locks the doors, clutches the purses when we see young Black men? That part?”

I’ve never considered myself racist. I’ve had plenty of Black friends in my life, I’ve always supported equality, and I like to think I call out hate speech and bigotry. Guess what? That’s not enough. I thought that just because I’m not spewing slurs or consciously alienating Black people, that I’m not a part of the problem, when it turns out: I AM THE PROBLEM. By being silent and not addressing my own subconscious prejudices, I’m complicit in and contributing to a system that oppresses minorities. Still, no matter how well-intentioned I am, coming to terms with my own flaws and (gulp) racist tendencies was, and is, a tough pill to swallow.

In the video, Myers offers three tools to end unconscious biases. It’s the biases we don’t even know we have—and yes, we all have them—that feed into and help perpetuate the cycle of unjust treatment of Black people. So, what do we DO? Myers’ calls-to-action can help white people take the first (of many) steps on the path to helping Black Americans achieve true equality.

1. Get Out Of Denial

“We have to stop trying to be good people. We need real people,” Myers says. “The problem is, if you ask someone right out, they’ll say they aren’t biased. But most, if not literally all of us, have biases we don’t even know we have. Who do you trust? Who are you afraid of? Biases are the stories we make up about people before we know who they actually are.”

First and foremost, you need to learn what your biases are. She suggests the Implicit Association Test, which measures unconscious biases. The results of the vast population who has taken it is that 70% of white people unknowingly prefer white people and 50% of Black people unknowingly prefer white people. It’s not a conscious choice, and when I fell amongst that 70%, I was horrified. Which is, as Myers says, the first and right step. So, “what do we do about the fact that this is what our brain automatically associated?” Instead of pretending those biases aren’t there, we dive into them. Find out your biases and then go look for data to prove yourself wrong.

2. Move Toward Your Biases Instead Of Away From Them

“The problem with being ‘color blind’ is that it’s a false ideal,” Myers insists. “While we’re busy pretending not to see, we are not being aware of the ways in which racial difference is changing peoples’ possibilities. That’s keeping them from thriving and sometimes, it’s causing them an early death.” Once you’ve figured out your biases, the next step is, as the title of the talk says, “to walk boldly toward them.” That means you confront them head-on. One way to do this, as Myers says, is to “expand your social and professional circle. Go deeper and further.”

In addition to expanding our circles, “scientists are suggesting to stare at awesome Black people. Look at them. Learn about them. It helps dissociate the generations of unconscious biases in our brains.” Another way to subconsciously train your unconscious brain is to literally look at a side-by-side picture of a bad white person and an awesome Black person. Her suggestion was Jeffrey Dahmer and Colin Powell. She said just stare at them.

On the left, the white man, was an American serial killer who murdered and dismembered 17 men and boys. His later murders involved necrophilia, cannibalism, preserving body parts. The man on the right, the Black man, is a retired United States Army four-star general and was the 65th United States Secretary of State—the first Black person to serve in that position. Look at them again. And again. And again. Keep looking. Keep comparing. Burn it into your brain.

3. When You See Something, Have The Courage To Say Something

Finally, Myers pleads with the audience to say something when they see something. “Of course I would,” we think. In reality, it takes a lot of courage to do it, especially when it’s to the people we love. Those people, those conversations, however, might just be the most important. Whether it’s a grandparent or an uncle or a parent, these are the crucial talks to have, because this is how the cycle continues. Children hear the comments. We hear the comments, and whether we agree or not, they embed themselves in our brain and support unjust and unhealthy biases. “We can’t shelter our children from racism when Black parents don’t have the luxury of doing so, especially those who have young Black sons,” she insists. In order to stop the unconscious biases, we need to have the strength to call them out in those we love.

“This thing is not about perfection,” Myers says. “It’s about connection. You’re not going to get comfortable before you get uncomfortable.” Confront your biases, move toward them, and have the courage to say something, especially to those you love. Naturally, this is just the very start of the journey. There is no end-all-be-all solution to systemic racism—it’s a constant battle we all have to fight together. I’m learning, growing, messing up, and starting over, but what matters is that you’re ready, willing, listening, and changing. By taking the first step toward understanding your biases, maybe together we can figure out how to create a more inclusive world for everyone. Click here to take the Implicit Association Test and check out The Warmth of Other Suns: The Epic Story of America’s Great Migration by Isabel Wilkerson, another suggestion from Myers.