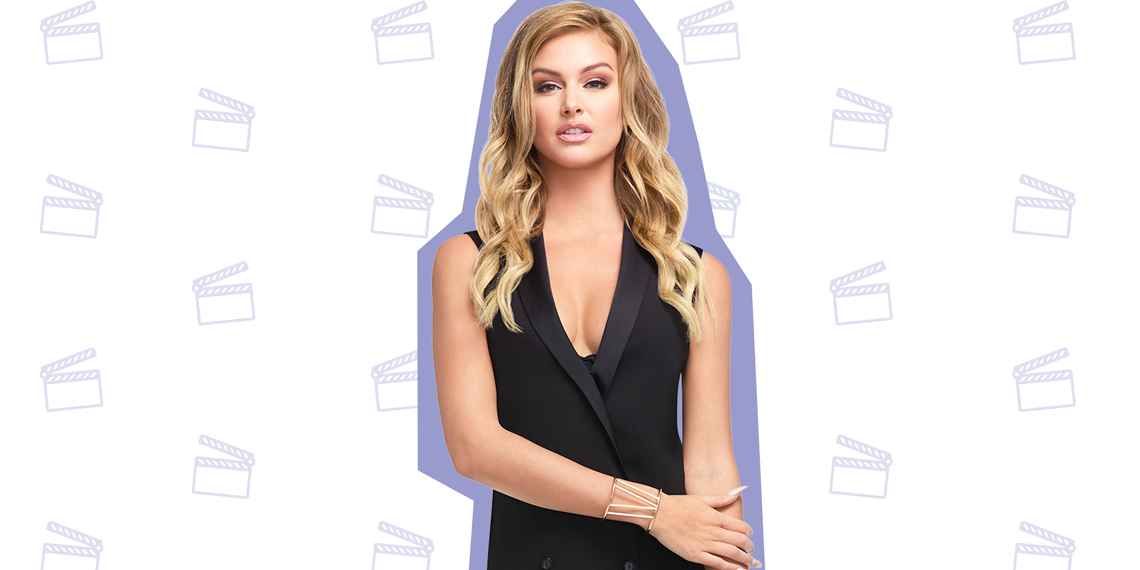 Lala Kent Is In A New WWII Movie, And Here’s Everything We Know

If you know Lala Kent at all (which I clearly do on a close personal level after watching her on my TV screen for the past three-ish years), you probably know her as the Vanderpump Rules hostess with an affinity for private jets and a special relationship with Tupac. There’s no denying that Lala has had a very successful few years: she launched a makeup line, cracked 1M Instagram followers, and got engaged to her super-rich producer boyfriend, Randall Emmett. One perk of dating Randall is the boost he’s apparently offered Lala’s acting career. In 2018, Lala starred in The Row, a 2018 sorority-horror movie that Randall produced, and which is already green-lit for a sequel. Recently, Lala has been posting on Instagram that she’s acting in a new movie, but it’s not another horror flic. Lala Kent’s new movie is a WWII drama set in Weimar Germany called Axis Sally. And yes, it’s produced by Randall. Oh boy. Here’s what we know about Lala Kent’s new movie.

It’s Based On A True Story

Honestly, I have no idea why Randall or Lala were drawn to this particular story, but here we go. Axis Sally is based on the story of a woman called Mildred Gillars, an American broadcaster who disseminated German propaganda from Berlin during WWII. After the war, (spoilers) Mildred is captured by the U.S., convicted of treason, and sentenced to “ten to thirty” years imprisonment (which is incidentally the same amount of time I will remain in grad school). Mildred’s story is definitely not the “brave gentile saves and hides endangered Jews” heroic tale we’ve come to expect from WWII movies and literature, that’s for sure.

Now, before you freak out, Lala isn’t playing the lead—she’s playing the assistant to one of the prosecutors in Gillars’ case. Mildred Gillars (aka Axis Sally) is played by Meadow Williams. I’d never heard of Meadow Williams before researching this, so I gave her a quick Google. Her personal website describes her as a “remarkable young actress from the farmlands of Tennessee,” which sounds to me like the set-up for a porno, but okay. There’s also some fascinating information about her legal troubles with her late husband’s family. (TL;DR his kids think she faked his will to get more money, which honestly sounds like a more interesting story than Axis Sally.) The  best description I could find for Meadow Williams is from the Daily Mail, and it labels her a “D-list actress branded a gold digger.” So, a WWII drama about a distributor of Nazi propaganda, in which both of the cast members we know of so far are known for reality TV and (allegedly) gold-digging. What could go wrong?

In case you’re curious, here’s a picture of Meadow Williams in her full Weimar Germany-era getup, sitting in a courtroom that I have seen no less than one thousand times on Lala’s Instagram story in the past week. (I would think that violates some sort of NDA or waiver they would have signed, but apparently not?)

Happy birthday to this pretty lady. Meadow, you have beauty and a heart and soul to match. I’m so thankful for your friendship. Have the best day ever♥️ @meadow.williams Ps. She is slaying it as Axis Sally. Game Over.

First, as you already know, Lala’s fiancé, Randall Emmett, is producing the movie. He posted a kind-of cute Instagram about it recently, featuring Lala in the outfit I now suspect she wears for the entire movie, given the number of Instagram stories and pictures I’ve seen it in. (I say the Instagram is kind of cute because there are TWO typos. It’s not even a long caption.)

@lalakent proud of you and this role that your crushing from the 1940s they all going to be blown away!!

Also, can we discuss how Lala looks like Jaime Lannister here??

While I’d always thought Randall just kind of threw money behind different productions and that’s how he earned his “producer” title, it turns out he actually has a production company: MoviePass Films. Yep, like the app. IMO, this explains why Randall’s movies keep tanking (Gotti, anyone?)—these people are not good at business!!

Also involved in this movie: Kate Bosworth, who you should know as the girl everyone had a crush on in the ‘90s. (If you don’t know who she is, you’re too young and I hate you.) Her main and/or only involvement seems to be the fact that her husband, Michael Polish, is the director, but that hasn’t stopped her from accompanying them to every set location and Instagramming the sh*t out of the whole thing.

On the bright side, it’s nice to see Lala diversifying her friend group. The list of random celebs involved with this movie continues with Al Pacino, a very serious A-list actor, and then someone named Alexa Dellanos. Dellanos has 1.1M Instagram followers, but I can find out literally zero information about her other than the fact that she was once spotted with boyfriend and graffiti artist Alec Monopoly, who I’ve also never heard of. If anyone can tell me what she does, how her waist is so small, and why she’s in a movie with Al Pacino, I am eagerly accepting suggestions.

This Isn’t Lala’s Only Dramatic Role

While Lala’s not exactly known for her serious genre work, it turns out Axis Sally isn’t the only drama she’s filmed this year. She’s also appearing in Vault, a 2019 crime drama set in the ‘70s.
How I’m picturing Lala’s role in Vault:

In case you were wondering, I trawled extensively and could not find Randall’s name in connection to Vault, so it’s nice to know she’s not exclusively working on his sets. While I personally didn’t love The Row (you can read my review here), I have to assume the fact that it’s getting a sequel means enough people did like it (or at least watched it). And while I would’ve expected Lala to go in a more “designing handbags” direction with her 30s, I guess I’m here for her “attempt at an Oscar” years instead. Truly, the year we see Lala Kent get nominated for an acting award is the year we know we’ve entered the sunken place.

What did I miss about Axis Sally? The movie has a $25 million budget (that’s a lot of PJ rides!), and is shooting in Puerto Rico. So when you see Lala posting incessantly from Puerto Rico for the next few weeks, you’ll know why. (JK, you’d know why anyway—she mentions in every single IG Story that she’s on her way to set. It’s almost like…she really, really wants people to know she’s in a movie??) So, if we all survive 2019, we can look forward to watching Lala Kent confer with Al Pacino, Instagram models, and background actors dressed in Nazi gear in 2020. Or, you know, not watch it. No one will judge you.