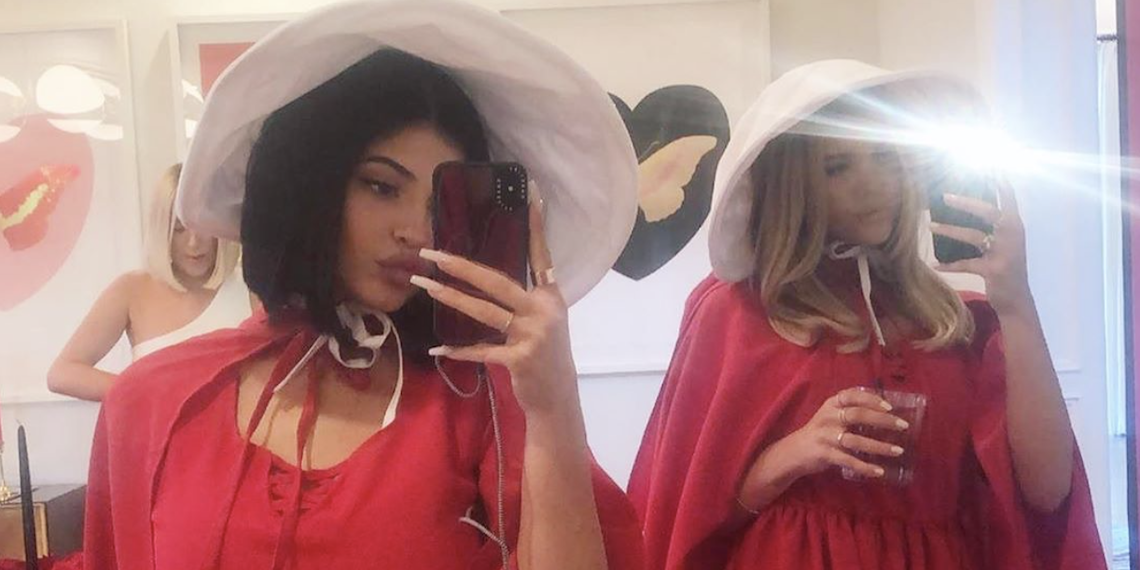 We’re now in season 3 of The Handmaid’s Tale, and with each episode, the dystopian society of Gilead gets a little more terrifying. Actually, the show is disturbing, but what’s even scarier are the real-world similarities to what happens in the show. It’s not amazing right now. But apparently not everyone who watches the show gets the connections, or literally anything about the plot, and I am referring specifically to Kylie Jenner.

Kylie spent the whole weekend celebrating her best friend Stassie Karanikolaou’s birthday (including a party with Jordyn Woods), and on Saturday she had a Handmaid’s Tale-themed dinner party for Stassie. Thankfully, Kylie documented the party on her Instagram story, because I truly wouldn’t have believed half of this sh*t if I didn’t see it with my own eyes.

This video is wild from start to finish, but let’s talk about some of the most important moments. First, Kylie says that The Handmaid’s Tale is her favorite show. Not like, “Oh yeah, I like it, Elisabeth Moss is cool.” Her favorite show. To be honest, I have a hard time believing this. I’m not calling her a liar, but I have no clue how someone could watch ~30 episodes of this show and still think Gilead is a fun party theme idea.

After walking through a red tunnel into the house, Kylie can be heard yelling “Welcome to Gilead! Get your outfits!!” She then walks up to a rack of red handmaid robes and white bonnets, because of course. Kylie then shows us that the drinks of the night are “Praise Be Vodka” and “Under His Eye Tequila.” I desperately need to know what is in these drinks, because I’m scared that Kylie is just serving cups of straight tequila and vodka. She and all of her friends are like, basically children, so this wouldn’t be completely surprising.

Kylie Jenner is having a party themed after the Handmaid’s Tale…..so…..who’s gonna tell her that her party is literally celebrating female enslavement for their biological reproduction??

WHO IS GOING TO TELL HER

We see the table set for the dinner party, and it’s as over the top as you would expect for any Kardashian/Jenner function. The center of the table is covered in red roses, and each place setting has a single long-stem red rose on the plate. The name cards are made to look like wrapped up letters, and the table might actually be the most tasteful part of this entire event.

Kylie then posted a video of Ariel Tejada, her makeup artist/BFF, and he’s wearing a suit so he looks exactly like a Commander. I’m pretty sure the sound of Kylie Jenner yelling “COMMANDER ARIELLLLL” will haunt my dreams tonight. Then we’re treated to a couple stories of Kylie and her friends prancing around in their handmaid robes, because obvi the most important part of being a handmaid is looking cute in your outfit.

The new season of The Handmaid’s Tale is just getting started, so I guess there’s still time for Kylie Jenner to figure out what the show is actually about, but at this point I’m doubtful that she actually really cares. Her main takeaway from watching the show is that Serena Joy is hot. Either way, she could definitely benefit from reading our predictions for season 3.