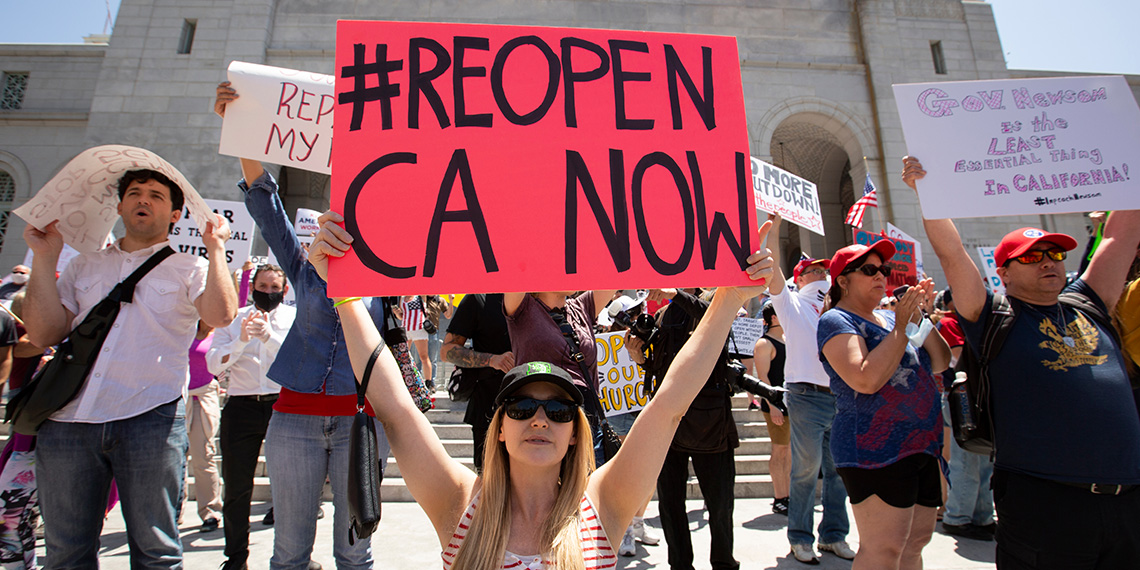 It’s now been a few months since we supposedly started taking coronavirus seriously in the U.S., and honestly, things aren’t going great. While case numbers are down in certain areas, many states have seen spikes in the last couple weeks, and on Thursday, the number of new cases reported nationwide hit a record high. But even with hospitals inundated with new patients, and states pausing their reopening plans, some people refuse to take the pandemic seriously. Karens across the country have decided that instead of COVID-19, the real enemy here is the face mask. This week, we saw angry Floridians arguing against laws requiring masks, with one woman claiming that lawmakers demanding people wear masks “want to throw God’s wonderful breathing system out the door.”

But the anger about masks isn’t limited to Florida, and now the anti-mask folks everywhere are getting crafty. I was perusing Twitter this morning, when this tweet from Lance Bass popped up. It shows a laminated “FACE MASK EXEMPT CARD” that supposedly exempts the holder from “any ordinance requiring face mask usage in public.” The card declares that forcing this person to wear a mask is a violation of the “Americans with Disability Act”, and that penalties for violating the ADA can be as high as $150,000. Furthermore, the card states that turning mask-less customers away from your business will be “reported to FTBA for further actions.”

HEADS UP fellow businesses…. This is not a thing. This is what happens when Arts and Crafts Karens have too much time on their hands. We will throw it in the trash and send them on their way. pic.twitter.com/VKACSA3pRU

Lance, who owns a bar in West Hollywood, tweeted that the exemption cards are “not a thing”, and that “this is what happens when Arts and Crafts Karens have too much time on their hands.” LOL. Even at a quick glance, the card looks pretty fake, but upon doing some further digging, it gets even worse. Right off the bat, there are multiple typos, including that the actual name of the ADA is the Americans with Disabilities Act. Pretty sure the government isn’t misspelling their own legislation on official documents.

Just because I was curious, I called the phone number on the card, which is supposedly the number to report ADA violations. False. The number is actually for the ADA Information Line, which is mostly meant for businesses to get “technical assistance” about complying with the ADA. The Information Line can provide information about filing claims of discrimination, but actual claims can only be filed online, by fax, or through the mail.

But at least the ADA is a real thing. The card also mentions the FTBA, which stands for Freedom To Breathe Agency. This definitely sounds like something that an avid Fox News viewer created two weeks ago, so I went to check out their website. Here’s the homepage:

Oops! Guess something went wrong! I’m not sure if this website ever existed, but various sources, including Newsweek, refer to FTBA as a Facebook Group, one that has no government affiliation of any kind. So basically, someone in this Facebook Group used their graphic design skills (but not spellcheck) to create this fake graphic that people can print out, laminate, and use as a way to own the Libs who are scared of, you know, a deadly virus. Great.

It’s unclear how many people have made use of the fake Exempt Card, but it received enough attention to warrant an official statement from the US Department of Justice, which enforces the ADA. In an alert posted to their website, the DOJ warned of “Fraudulent Facemask Flyers,” saying that these “postings were not issued by the Department and are not endorsed by the Department.” They stopped short of telling these idiots to wear their f*cking masks, but essentially made it clear that they’d like to be excluded from this narrative.

So yes, the exemption cards are obviously fake. But beyond that, why are these people so mad about wearing masks? Are there legitimate health risks that would make it unsafe for all these people to wear them? Turns out, the answer is not really. According to the CDC recommendations, the only groups who shouldn’t wear face coverings are “Children under age 2” and “Anyone who has trouble breathing, or is unconscious, incapacitated or otherwise unable to remove the mask without assistance.” Translation: pretty much anyone who can take off their mask without needing help can (and should) wear one.

Is wearing a mask fun? Not really. Can it cause obnoxious acne? Possibly. Can it also potentially save you and others from a life-threatening illness? Yes!! No one is happy that we’re still in a pandemic, but that doesn’t change the fact that we are STILL IN A PANDEMIC! Those surging case numbers are no joke, and at this point, wearing a mask is the least you can do. As for me, I’ll be staying my ass in the house for now, but to each their own.