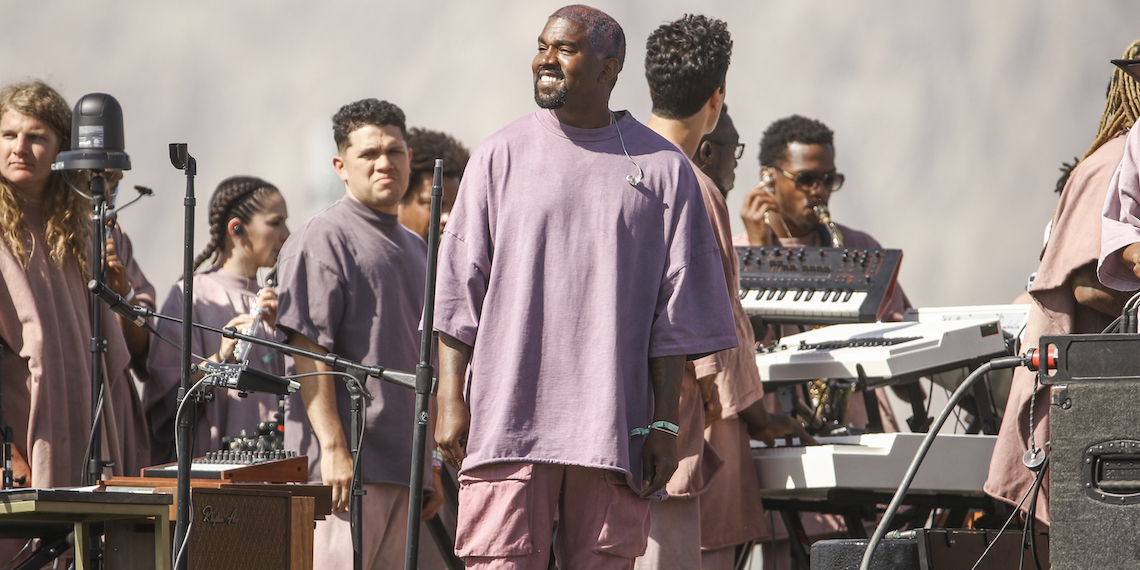 Everything You Need To Know About Kanye’s Coachella Sunday Service

Well folks, we finally made it through Coachella. After two grueling weekends of Instagram models shaking their bare asses in the desert, we can let Coachella slip from our consciousness for 11 months. But before we forget about ‘Chella 2019, there’s one more thing we desperately need to talk about: Kanye West’s Sunday Service. I’m sure you saw it on Instagram, but you probably have a lot of questions about what it actually is, and why every creature of Instagram showed up in their Sunday best to a random field in Palm Springs.

To start, let’s go back to January of this year. After Coachella announced this year’s headliners, the drama began. Reports quickly surfaced that Kanye West was supposed to be this year’s Sunday headliner, but there were last-minute issues. Specifically, he demanded that the festival build him a giant dome for his performance. They told him it wasn’t possible, and the contract negotiations fell apart from there. Luckily, Ariana Grande was available, so she became the headliner instead.

We’ll get back to Coachella in a minute, but now let’s focus on Kanye. Since January, he’s been hosting a weekly Sunday Service, a mysterious gathering where a giant gospel choir sings arrangements of Kanye West songs. It’s still unclear whether there’s a specific religious connotation to the Sunday Service, but it’s definitely meant to promote the image that Kanye is basically the next Jesus. Or the next God? Idk, I haven’t been to church in a long time. Since the Sunday Service started in January, it’s become a big event, and lots of famous people have made appearances. Attendees include Kid Cudi, Katy Perry, Orlando Bloom, Courtney Love, and all the Kardashian-Jenners (of course). Kanye might be crazy, but his Sunday Service is still one of the most exclusive invites in town.

Then, a few weeks ago, it was announced that Kanye was bringing his Sunday Service to Coachella. He didn’t get the dome he was hoping for, but this performance made just as much of a statement. It was Easter Sunday at 9am, and the who’s who of Coachella trekked to a grassy mound, where dozens of singers were in purple robes. Kanye led the choir, and at one point broke down in tears, either because he was so moved by his own work or because it was really f*cking hot out there. We’ll never know. Luckily, Kendall posted this series of videos, which look like footage straight out of Wild Wild Country. Is Kanye…The Bhagwan??

While the actual Sunday Service part is a little too cult-y for me, I loved seeing who showed up, and what kind of lewks they turned out for the Easter to end all Easters. Coming in hot was Kylie Jenner, who rocked a long-ass braid, adorned with seashells and crosses. Because nothing says “He is risen” like clipping some puka shells into your fake hair, and not going to church in favor of getting f*cked up in a field. At least, that’s what I would tell my pastor growing up.

I’m also really enjoying this picture of Kim and Kendall, who look like they went outside to see the solar eclipse, and are thoroughly unimpressed. I’m mostly confused by the bracelets (?) that Kim is wearing, which look more like the weights my pilates instructor yells at me to use. Big ups to Penelope, who is obviously too cool for all of this.

My favorite detail of the whole thing is the merch. Actually, they were calling the merch “Church Clothes,” which is actually incredible. Sweatshirts started at $165, but you could also get socks for $50. A steal of a deal! I mean, I’m just obsessed with “Church Clothes.” It’s so good.

In terms of the music at the Sunday Service, Kanye debuted a new song called “Water,” and guest performers included Kid Cudi, Ty Dolla $ign, and Chance the Rapper, who came out to premiere the song. As much as I’m rolling my eyes at the entire Sunday Service concept, it still sounds like an amazing f*cking concert. Also, people think he might be about to release his new album, YANDHI. Oh yeah, if you didn’t already know, Kanye’s next album is named after Gandhi. He’s always been a humble guy!

It’s unclear what’s coming next for Kanye and the Sunday Service, but I have a feeling we haven’t seen the last of Kanye pretending to be God. I mean, that’s kind of his whole thing at this point.