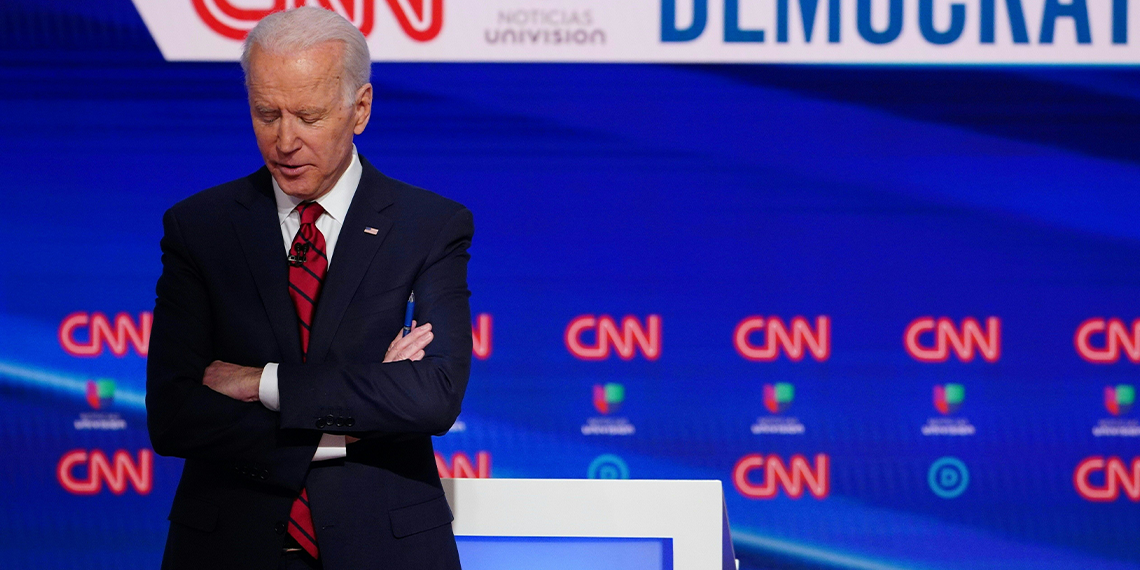 We previously penned an article with the headline We Need to Talk About These Assault Allegations Against Joe Biden. One month later, here we finally are. Yay?

In recent weeks, woman named Tara Reade, who worked for Joe Biden when he was a senator in 1993, has come forward accusing the presumptive Democratic nominee of sexual assault, expanding on a previous claim that Biden had touched her inappropriately to allege he also pushed her against a wall and sexually assaulted her.

After remaining silent about the allegations for many weeks, Joe Biden this morning made a statement denying them.

In a written statement, Biden says that this incident “never happened.” The former Vice President and presumptive Democratic nominee also attempts to advocate for survivors of sexual assault, saying, “While the details of these allegations of sexual harassment and sexual assault are complicated, two things are not complicated. One is that women deserve to be treated with dignity and respect, and when they step forward they should be heard, not silenced. The second is that their stories should be subject to appropriate inquiry and scrutiny.”

Biden echoed the sentiments of the written statement in an interview on MSNBC, where he reiterated, “I’m saying unequivocally it never, never happened.” He also urged the National Archives to search through his Senate records to identify any complaint of misconduct, which Reade says she filed with the Senate in 1993.

Other Biden staffers at the time say they do not recall a complaint or ever discussing an issue like this with Reade. Reade’s motivations  have been questioned because of past praise of Vladimir Putin.

So, Biden has graduated from ignoring the allegations to denying them. A bit derivative, but I’m glad he is addressing them now, as they are bound to come up in November. We all know Trump will bring this sh*t up, and Biden needs to be prepared for that. *Thinks about the inevitable moment when these two men go back and forth about their sexual assault allegations on the debate stage and voluntarily dissociates until 2021*

To recap, Tara Reade came forward with allegations of inappropriate touching from Biden back in 2019 when several women did the same. She spoke of incidents when Biden touched her neck and shoulders and made her uncomfortable. Reade has since elaborated on her story, and says Biden shoved her against a wall and penetrated her with his fingers without her consent.

Unfortunately, her story wasn’t met with much of the “believe women” and “all women should be heard” sentiment that the world claimed to adopt in the post #MeToo era. Not many major news outlets covered the story, people accused Reade of being politically motivated, and Biden himself remained silent while women like Nancy Pelosi and Stacey Abrams had to speak on the issue for him.

Not our best work as the party who claims to be champions of survivors, I’ll say that.

Perhaps the reason we finally saw some acknowledgment of these allegations this week are because of a) pressure from women’s rights groups pleading with the former vice president to make a statement before they had to publicly ask him to, and b), evolving reporting that suggests there is more evidence that can be investigated.

Originally, Reade’s brother and a friend who asked to remain anonymous were able to confirm that she told them about the assault after it happened. This week, two more people came forward to say Reade discussed the incident with them.

A former neighbor of Reade’s, Lynda LaCasse, told Business Insider, “This happened, and I know it did because I remember talking about it.”

Another source, Lorraine Sanchez, a former coworker of Reade’s, says she recalls Reade complaining at the time that her former boss in Washington, DC, had sexually harassed her.

Reade had also previously said that she had talked to her mother, who has since passed, about the assault. A newly surfaced video from 1993 shows a woman calling into “Larry King Live” to seek advice for her daughter who was having “problems” working for a prominent senator.

“My daughter has just left there after working for a prominent senator, and could not get through with her problems at all,” the woman says. “And the only thing she could have done was go to the press, and she chose not to do it out of respect for him.”

Reade told CNN that she is confident the voice in this video is her mother’s.

In his official statement, Biden called on the National Archives to release any existing complaint related to Reade’s employment, even as he continued to oppose requests to release other documents related to his years in the Senate, which are housed at the University of Delaware and not scheduled for public release until two years after he leaves public life.

When pressed by MSNBC’s Mika Brzezinski about why he wouldn’t allow a search for any documents related to Ms. Reade at the University of Delaware, Biden — seemingly annoyed by the question — claimed that there wouldn’t be anything to find there. He also suggested that releasing the papers could result in the release of private, confidential conversations with officials that his political opponents could use to undermine his 2020 chances. Who, Donald Trump?! He would never!

So, as it stands, Biden denies the allegation, there are several people able to corroborate Reade’s story, but there isn’t any evidence being released that could verify her official complaint against Biden. Hopefully, we can move forward with this information and do a thorough investigation, as women and all survivors do deserve to be heard.

Don’t miss an update on this story — subscribe to the Betches Sup newsletter for the only daily news rundown you need.