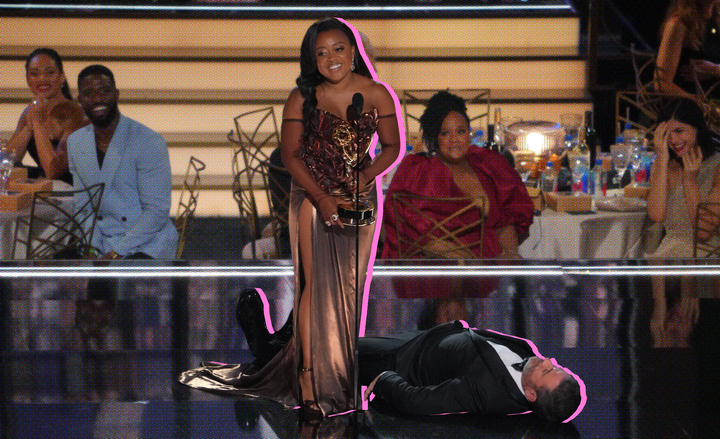 First, the Oscar slap and now this. It’s starting to look like we can’t have award shows that aren’t marred with controversy anymore.

In case you missed it, the 74th Annual Primetime Emmys were Monday night, and while most of the show went off without a hitch, there was one moment that had people up in arms. That would be the moment where Jimmy Kimmel was lying down on the stage and refused to get up when Quinta Brunson won her award.

For those who didn’t see the odd exchange, let me explain. Will Arnett and Jimmy Kimmel were presenting the award for Outstanding Writing for a Comedy Series. As the two were introduced, Will walked onto the stage while dragging a seemingly unconscious Jimmy by his feet. He then joked, “Jimmy couldn’t be here tonight,” explaining that the late-night talk show host, who was up for Outstanding Variety Talk Series, was passed out drunk. “This is like the 13th time that he’s lost, and he just got into the skinny margaritas back there.”

It was a funny enough bit that garnered some laughs from the crowd, especially when Will went to announce the winner, but first had to reach into Jimmy’s coat pocket for the envelope. And then, it happened: Quinta Brunson won for Abbott Elementary, the sitcom she both created and stars in. Considering that Quinta is only the second Black woman to ever win in this category, it was a monumental moment. But, as she went to accept her award, Jimmy continued lying on the stage, right in front of the microphone.

To her credit, Quinta tried to gamely play off his joke, saying, “Jimmy, wake up, I won!” Still, the talk-show host didn’t move, forcing her to give her entire speech next to his lifeless body. Unsurprisingly, people on social media were not happy.

One user on Twitter wrote, “So Jimmy Kimmel is really gonna upstage her speech by laying on the floor in front of her? Like what the f*ck” Another chimed in saying, “The choice to make Quinta Brunson step over Jimmy Kimmel to get to the mic and then play her off early was atrocious.”

While many criticized him for letting the joke go too long, others pointed out that Jimmy has a history of making racist remarks, engaging in sexist behavior, and even donning blackface and a number of people took his extended comedy bit as an affront to women and the Black community at large.

“If Quinta Brunson stepping over Jimmy Kimmel who literally laid in her spotlight on the day she won an Emmy isn’t a metaphor for what it means to be a WOC in a white mans world I don’t know what is,” wrote one Twitter user.

Plenty of others agreed with the sentiment, with one person saying “Only a white man would centre himself in someone else’s moment. So gross!” Another wrote, “So wait, Quinta Brunson won an Emmy for Best Writing in a Comedy Series, a huge moment considering the struggles of women and Black writers in comedy, and Jimmy Kimmel…was literally lying in her spotlight for the entire speech? If that isn’t so symbolic…wtf,” while someone else called the moment, “A real life example of how men try to take up space on women’s success.”

Now, I don’t personally know Jimmy Kimmel. I would like to give him the benefit of the doubt and say that he probably didn’t intend any harm. If Steve Martin had won instead, I imagine he would’ve done the same thing. But his intentions are beside the point. The image of Quinta Brunson holding an Emmy and tearfully thanking her loved ones as Jimmy Kimmel lies in front of her is upsetting. Here is a young Black woman being awarded for her hard work as a white man stays, uninvited, in the spotlight with her. It’s a visual reminder of the disrespect that women of color face on a daily basis. The fact that Jimmy Kimmel didn’t mean to hurt her doesn’t matter.

Afterwards, during her press room interview with Variety, Quinta spoke about it, saying “I know Jimmy Kimmel and I felt like the bit didn’t bother me that much. I don’t know what the internet thinks.” She went on to say, “I don’t know, tomorrow maybe I’ll be mad at him. I’m going to be on his show on Wednesday, so I might punch him in the face. We’ll see what happens.”

Of course, some people were quick to use her nonchalance as a way to defend his actions, saying that since she wasn’t upset, the rest of us shouldn’t be either. Many also pointed out that Quinta won a comedy award. Which, while true, is irrelevant. Not everything she does needs to be turned into a joke. What’s more, she wasn’t the one making the joke. She was forced to be part of someone else’s comedic skit rather than being afforded a moment of her own. Not to mention, it wasn’t even that good of a joke. (Maybe that’s why Jimmy Kimmel continues to lose to John Oliver.)

But, in the end, Quinta came out on top. She handled the moment with an absurd amount of grace and dignity. Perhaps next year, she should be the one to present the Emmy for Outstanding Variety Talk Series. On the off-chance that Jimmy does win, she can just stand next to him the whole time with an unassuming expression of optimism on her face, à la Janine Teagues. Or maybe she should just get her revenge on his show this Wednesday.