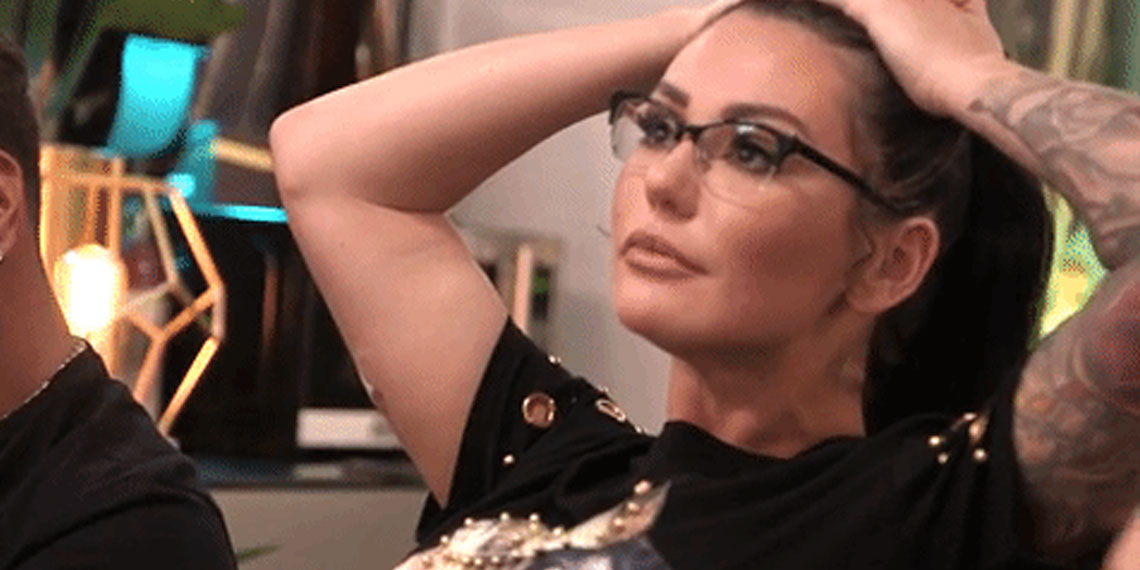 On Jersey Shore Family Vacation, Jenni v dramatically announced she was leaving last week due to Snooki bringing her rando friend into the house and generally just sucking overall. Tbh, I don’t really care if Jenni leaves at this point considering her mostly tragic outfit choices and her psychotic obsession with her friends making her a Mother’s Day video. Vinny has had more important matters to deal with, as his uncle passed away unexpectedly. Which means we will most likely be without wit or solid one-liners for the entire episode.

So Angelina is excited that Jenni is leaving, which surprises no one. She like, really wants to be Jenni. It’s creepy. Snooks freaks the f*ck out, but according to Jenni, she wasn’t in the Mother’s Day video so it’s whatever. What is with this f*cking video? Who expects their friends to be in a Mother’s Day video for them and freaks out when everyone thinks it’s weird? Is she confused? Does she think she birthed Snooki?

The Situation: It’s like a chihuahua trying to fight a pitbull. We all know how that ends.

Yeah, pitbulls actually tend to be pretty sweet and docile while chihuahuas are loud, aggressive assholes that attack and draw *tiny amounts of* blood.

Ronnie: Let’s invite Joey when everything is spiraling out of control in everyone’s life.

If I’m agreeing with Ron, something terrible has happened. They’re all going out to a club and Pauly brought Keto Guido Cheese, who he has now renamed Skinny Vinny. But he unfortunately doesn’t last long, because Angelina takes a f*cking bite out of Skinny Vinny. Which according to Snooki, is cheese that has been out of the fridge for three days. I don’t even know the kind of diseases you get from that, but it’s pretty on brand for Angelina overall.

Meanwhile, Joey is taking his shirt off and drinking out of the ice bucket. Pretty much the amount of class I’d assume from Snooki’s BFF. Ronnie has to have a conversation with Joey about personal space, which, like, what?? If Ronnie is telling you about boundaries, where are your life choices, Joey?

Somehow it gets worse. Then he sexually harasses Sitch, who btw, is engaged.

Joey: If you see me in the shower, you might get aroused.

Joey, he’s just not that into you. Or even attracted to men. Sitch then sics Joey on Pauly. Speaking of Pauly, he is super drunk, and then starts dirty dancing with none other than DIRTY HAMSTER Angelina. Who is supposedly engaged, but is this the same guy that she cheated on before who didn’t care? What does it matter at that point? She’s basically dance molesting Pauly.

Mike: It was debacher-ary. It was befuddling.

He should be required to define both of those words. Snooki thinks Ang cheated because she was basically humping Pauly on the dance floor. Which, like, fair.

In the cab home, Pauly tells Angelina to just let him know if she wants to have sex with him. This has been all Ang wanted for the last decade, soooo I’mma say she’s going to take him up on it. Also, ew. Pauly is soooooooo drunk. Mike is babysitting him and walking him to the room while Pauly comments on how he needs the hotel’s wall sconces in his own home. Pauly then drunkenly drags furniture around then passes out on the couch. Meanwhile, Joey and Snooki are annoying. They ride the escalator as a roller coaster and talk about how Snooki doesn’t dress slutty because she’s classy now. Jenni is so over her friendship with Snooki and packs her sh*t and leaves before the roommates break up. That’s f*cking mean, even in this context.

Vinny is back home getting his ass wiped by his mother, as he’s always dreamed. Then they talk about babies (why) and then Vinny mentions he doesn’t want a baby and always uses protection. To which his mother responds, “Yeah, I find them in your laundry. The gold wrappers.” F*cking ew. At least throw your condom wrappers out, you nasty.

Everyone goes to the pool where there is one of those pretend surfing stations. They force Joey to do it because he’s only here for the cast’s humiliation. He basically lies flat on the board and then gets owned and his bathing suit falls off. Sooo… I guess he fulfilled his purpose?

Ron goes to see a lawyer and I’m v sick of this storyline so I didn’t bother listening.

Apparently it’s their last night in Vegas and they’re going to see Chippendale’s. I didn’t realize it was their last night—like so Jenni left literally one day early? She couldn’t stay one additional day to ride it out? Also, love how no one seemed to notice that she’s gone. Or care. Maybe Granni Jenni should check her attitude before season 3 if she wants to be invited back.

Pauly wants to have one extra boy’s night in Vegas and is convincing Mike, Ronnie, and Vinny to stay to hang out with him without the girls. By “girls”, I mean Snooki and Angelina and Joey, all of whom are terrible.

At the Chippendale’s show, some guy takes a shower??? This is part of the show? Then Angelina goes up on stage and they basically molest her. She also takes off some guy’s pants on stage. All of this is aggressive. Oh, and then the show is over. They didn’t really sell it for me.

The Situation rehashes his stripper days, which we already know were awful, because well, he’s awful and his dancing was awful. He then finally admits that his dancing was so bad he was demoted to waiter. That took almost 10 years for the truth to come out.

It’s officially the last day and Angelina complains that she doesn’t want to leave Vegas yet. And it’s like, f*cking obviously, you’re irrelevant in real life and it took you forever to be included by the group.

Pauly is still coercing everyone into one more guys day and instructing him to pretend he is leaving so the girls don’t stay. It’s a perfect plan, except for the fact that all of this is on TV, guys, so they’ll see this and totally know. Mike immediately goes to the girls and says something like, “I’m staying here,” revealing the secret plan.

They should have kidnapped Mike for the guy’s weekend and not actually told him anything. Duh. Pauly has decided that GTL has changed to the girls’ appearances, with the “L” now representing Lips. Because they have crazy f*cking lips.

Ronnie blames women for his sh*tshow of a life, which, really? This is totally your fault.

Jenni and Deena meet up in real life. Tbh, I’m over both of them. They’re boring and old and cry about their husbands and babies all the time and I just have no interest in it.

So everyone goes to the pool, which Pauly declares it’s PMS time, because it’s Pauly-Mike-Snooki time, and it’s “their time of the month.” Then Joey found a guy that looks identical to him and makes out with him literally sitting right next to everyone else and it’s super awkward. During this time, Vin calls Pauly, and Pauly tells the girls it’s his mom. Mike then again rats out that he’s not leaving to the girls. Mike, are you sure you’re sober? You are so dumb, you’re behaving like someone who is on drugs.

Angelina is packing and saying she had a great time and she had to “make her mark” to which Pauly clarifies, her “skidmark”. Vinny is hiding in the lobby waiting for the signal from Pauly that the girls are gone so guy’s weekend can start. Pauly is so over the girls, he’s not even sad they’re leaving, he’s more like, “K bye, f*ck off.” Which tbh, I share feelings about the girls right now. Why were they all so boring?

I guess next week is going to be just guy’s weekend? It’s the finale, yes? I don’t know what’s happening anymore.