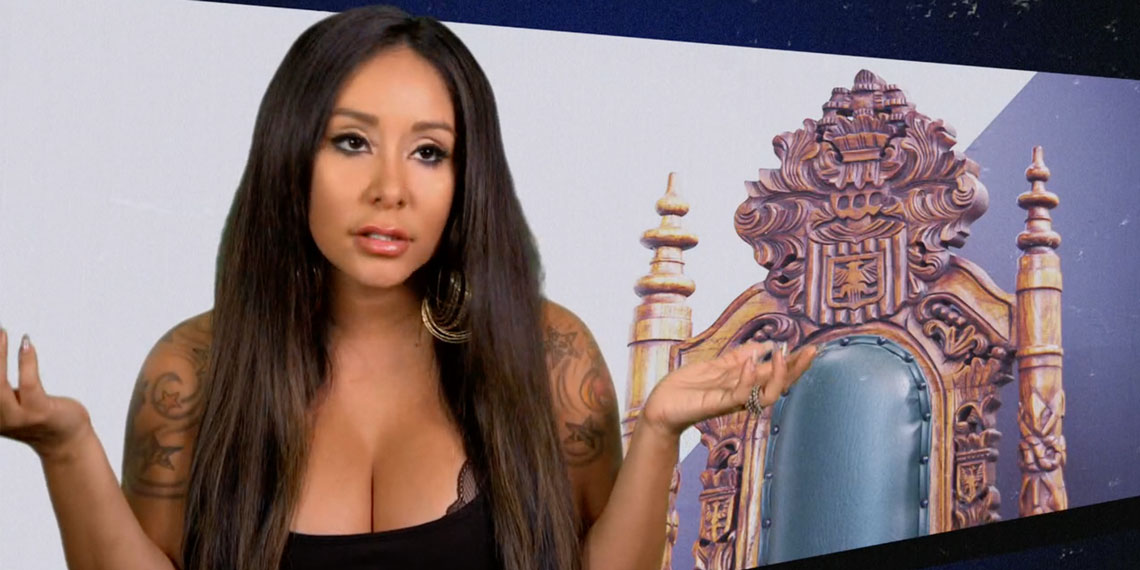 So, Jersey Shore Family Vacation is literally just my life now and I have no idea what’s even going on anymore. I feel like I’m back in high school in SAT class. Deena comments that she loves the house so far, citing things like she “got a good night’s sleep” and “has her space”. I’m sorry, I wasn’t aware I was watching a show about church camp, BUT GOOD FOR YOU. Maybe they’ll go swimming and exchange friendship bracelets.

Deena then corners Vinny and asks about the penis touching incident and told Vin it seems like he and Ang are a couple. #burn.

Then Snooki says she is throwing a 7-year-old style birthday party at the house which is both weird and f*cking annoying. Jenni is thrilled because she “throws these parties all the time”. Sounds super sick, guys. This is so much worse than friendship bracelets.

F*cking ew. Can we work on getting some kind of STD testing sponsorship for Pauly’s DJ sets?

They are literally jumping at a bounce house. I’m half expecting Corinne Olympios, queen of naps and cheese pasta, to show up and try to molest someone in it.

Angelina shows us all how to use a giant hamster ball, as she is the dirty hamster expert here. Mike almost dies trying to use said hamster ball because he has obviously not been doing his cardio.

Burger King is catering this entire thing. I’m sorry, what the f*ck am I watching? I make up all kinds of excuses to avoid my friends’ kids’ birthday parties, and yet now I’m somehow being held hostage to watch sad grown adults have a kids party because they are trying to make “drama” for their show.

Vin completely lies about his diet and pretends this is the first time he’s had carbs. But hi Vin, those keto strips don’t lie. Then Mike lies too, claiming he hasn’t had BK in years. We literally have FOOTAGE of him and Jenni at Burger King post-rehab speech. Mike, we have the receipts.

Vinny is making up some game or “challenge” amongst himself where the losing option is to kiss Angelina’s feet. Yeah Vin, seems like you really don’t want to do that. He acts like he can’t lose because he’s so grossed out by Angelina. But again, he’s the one who came up with the feet kissing.

Vin: Hey, Angelina should kiss my feet, or I should kiss Angelina’s feet, but I hope that doesn’t happen because Angelina is gross. Haha. But like, can we still do the feet kissing?

Oh my God, I just noticed Vinny is wearing a shirt with the Instagram logo that says “Introverted”. I’m sorry, that is f*cking obnoxious. Get with the program, we all stopped bragging about being introverts in like, 2014 when Thought Catalog stopped being cool. Vinny wins and Angelina now has to kiss his feet, which I’m sure he’s thrilled about. This isn’t Ang’s worst Tuesday. She’s used to being disgusting. Vinny is so excited that Ang kissed his foot that he hugs her in gratitude. All of it is disturbing.

The girls and guys decide to separate for the night. Ang decides it’s going to be a classy night which means no swearing, napkins on laps, proper posture because she has scoliosis, and no bodily functions. Okay, let’s just replace her with someone who isn’t trash. The guys are going to the club and I’m way more excited for their drama. We finally get to see Single Ronnie at work. There is no talk about Single Jenni, and that’s a total bore. The girls go to a classy bistro for cheese and wine, and Angelina calls Jenni “a disgust” because she’s burping and whining that she’s fat. K.

The guys go to Jeni’s and Ronnie is like, “oh I haven’t been Single Ronnie in 15 years,” and it’s like, Ron, your best Single Ronnie was always when you had a girlfriend. The guys are horrified to find it’s country music night. The scene is lame so they eat ice cream cones in the corner. This is literally me at every bar. Then some sad sack comes up near their table and is pathetically dancing to himself and miming fake sobs. Oh my God, is doing The Ronnie? Is this a dance move now?

I don’t believe any “just kidding” of Vin’s anymore, I guarantee he will sleep with this man. This guy is just staring at them dancing with a chair. Mike is overall pleased with boy’s night, as he’s had a chance to gorge himself. Single Ronnie is completely lame when he’s not cheating on anyone. Really takes the fun out of it.

The girls are drunk and Snooki literally pours the rest of their bottle of wine into an empty Gatorade bottle in her purse. If that doesn’t say class, I don’t know what does. Jenni comments that they are all really polished tonight, like a “polished turd.” I almost completely stopped listening but then as they are leaving, some old-ass man calls Deena FAT. Deena is f*cking pregnant, not okay dude. But the plot thickens. Apparently, as the crew walked by, what he actually said was, “every girl is fat.” Holyyy shit. Do you not remember what happened the last time some rando called a Jersey Shore lady fat? Here, I’ll remind you:

remember when Jwoww punched a girl in the face for calling Snooki fat pic.twitter.com/LANutF7a1e

I’ve seen Jenni IRL and let me tell you, aside from her boobs that are larger than my head, she is tiny. Jenni and Snooks stalk back into the bar. Jenni is all, “Did you call a PREGNANT girl fat?!” And calls him a b*tch. And points in his face and is like “THIS IS WHAT’S WRONG WITH AMERICA!” Then the guy calls Jenni a b*tch.

BUT THEN. They walk away. I’m soooo disappointed. In the good old days, Jenni would have legit punched him in the face (see above). Quit this maturity thing, I like to watch trash TV for the possibility of assault charges! What is this sh*t?

Okay, the guys are still sitting at the table with their little dancer man. He finally asks for a picture with them. He danced for three hours for a photo. Then he walks away. Vin feels abused by the fact that he only wanted a picture.

The guys leave to get funnel cake. The girls go to bed. I don’t want to old-shame, but like, guys, it may be time for you to move on from Jersey Shore. These are not the guidos I know and love. Like, you guys got ice cream and went to bed. I don’t need to waste my life watching TV about this; it’s what I do regularly.

Since carbs found Vinny, he is now going HAM and cannot stop himself. Pauly calls him a cheater and makes him wear an iPad on a gold chain with a photo of himself eating carbs. They just have these things at their disposal just in case.

A whole day goes by with nothing eventful to show (shocking) and the gang all goes to dinner together. Vinny so ~randomly~ runs into his cousins at the restaurant. But guess what? Turns out, the cousin’s friend is THAT MOTHERF*CKER that called the girls fat last night at the same restaurant! I’m sorry, are there only like three restaurants in all of Jersey??? How did this happen? Vinny, are you seriously related to these POSes?

Ronnie: I’m going to play with my foot up his ass.

Okay, so they’re showing this guy’s face which means he had to sign a release for filming, right? Seems like this is fake but oh well. Then the Fat-Shamer himself walks by Mike, and is like, “oh Mike? We have a mutual friend!” And Mike f*cking shakes his hand.

The girls are like, “why the f*ck are you shaking his hand?” And Pauly goes, “Get out of my table chooch!” (Wtf is a chooch?)

According to Urban Dictionary: chooch
The term is derived from the Italian word “ciuccio” and means jackass, dummy, idiot, or moron. A chooch is a person, who against better judgment, acts inappropriately.

The Fat-Shamer denies the fat-shaming. I’m sorry, HI, this is all FILMED. Ronnie is just sitting, eating and ignoring. Vin calls him a “doo-da-doo” which is apparently a loser. Why do all of their insults sound like they are from a fifth-grade playground? The guy retreats and Angelina realizes she knows one of the girls he’s with. Of course she does. The girl is a stripper and hates Ang. I also hate Ang so I can’t blame her there. They all go upstairs to the lounge club area and Jenni is wearing a cardigan and glasses like, why does she want to fight me?

The Fat-Shamer goes up to them and gives them the finger. Pauly jumps up and gets in his face, the first man to step up and defend the women, THANK YOU Pauly! It’s a lot of “WHAT’S UP MY GUY” before his security intervenes. Pauly’s “GUY” gets removed by security and the crowd chants Pauly’s name. It’s like every bullied kid in middle school’s dream. Also, it’s probably pretty easy to stand up to people when you’re surrounded by private security, just saying.

Ronnie misses everything because he’s once again destroying a toilet and runs into THE GUY outside the bathroom. The Guy compliments his man jewelry and tells him he has more money than him. They start bickering. C’mon, Ron, handle this. Make me hate you slightly less.

The Guy is like “I only call fat chicks fat”, which is OFFENSIVE, RON, but then he starts calling Ron “baby”, and this took a weird turn. And then Ron is all, “I’m not your baby”. And The Guy touches Ron’s chain. Ron is like, “OKAY LET’S GO!”

Referring to The Guy’s Givenchy shirt. Which is pronounced jee-von-shee, BTW. If you’re going to make fun of someone’s designer shirt, you have to know how to correctly say it.

???? Is this an insult or an invite? Jesus, fix it. Ronnie goes on a Ronpage and grabs all his security to go meet the guy for fighting purposes. Then the trashy stripper girl starts hounding Angelina. Classic Ang is all “f*ck you bitch, stripper bitch, ugly titties”. The guy never comes back—he literally let his GF fight for him? Then the stripper JUMPS the fence and security carries her out.

Unfortunately, this is also when MTV decides to cut the episode. Okay, finally I want to watch something about this show and it just ends?? Whatever, until next week.