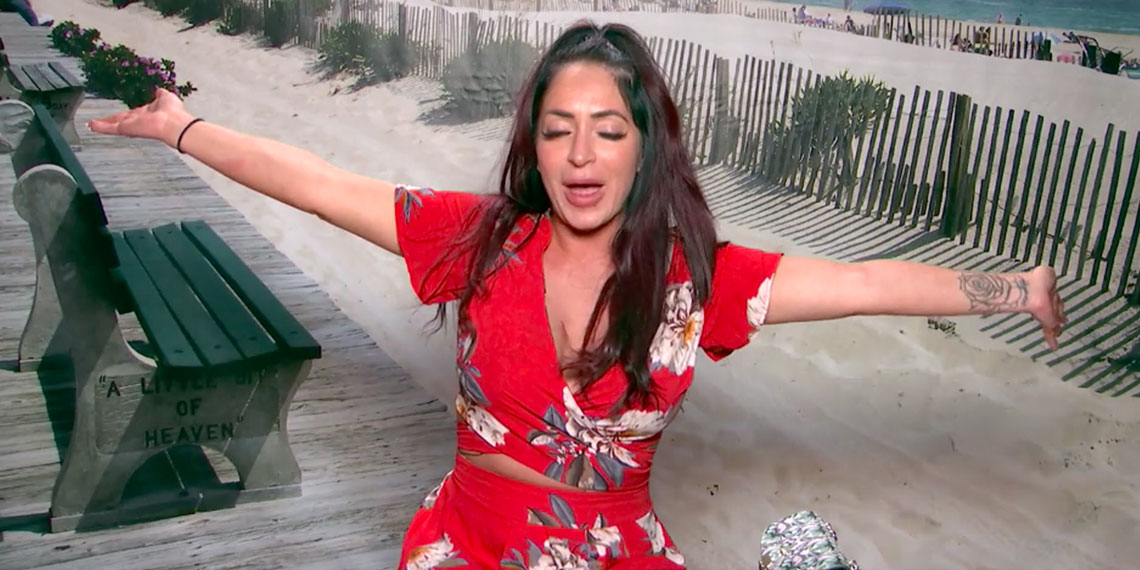 Previously on Jersey Shore Family Vacation, Snooki had transformed into Dren, her drunken monster alter ego, and proceeded to humiliate the roommates at a nice restaurant. Was that last week? Idk, fam, this season is like 200 episodes long, they are all blurring together for me at this point. Also, I’m sick and super loaded up on Dayquil. We’ll see how this goes.

Dren at this restaurant:

Oh my God, Dren, must you be so f*cking loud? This is a restaurant and she’s shrieking like a banshee. Some of us aren’t feeling well and need you to use inside voices for this episode, God. (I would turn the volume down but then I can’t hear everyone else speaking.) Dren asserts her dominance by flinging broccoli across the table and howling.

Vinny: Luckily the broccoli was sauteed in butter, so it’s keto, so my body can absorb it pretty well.

Vin, quit lying to yourself, we already discovered that our Keto Guido is a liar as his little keto strips proved that butter is a carb. Or more likely, Vin sneaks carbs in secret. Vin, I do it too, no judgement.

They finally wrestle Dren out the door where she proceeds to attack Angelina in the cab. Jenni is refereeing, absolutely livid that she is parenting toddlers yet again when she only went on the show to escape her kids to begin with.

Jenni: We are not going to the club if this is how you’re gonna act!

Dren then pours water all over Ang and herself. There is a lot of shrieking. Should I take more Dayquil? How much can I take before it kills me?

Me trying to get through this f*cking episode bc this is my job:

They all arrive at the club where they let Dren drink even more. Her teeth really freak me out btw, they look like one big piece of teeth and they glow v strangely in the blacklight. What has she done to herself? I mean, veneers are supposed to be separate individual teeth, right? Angelina starts grinding on Vinny’s lap.

Vinny: I’m just trying to be cordial. She’s just like bouncing on my d*ck.

Yeaaaah Vin, seems like you’re really doing your best to avoid this situation. Angelina dumps her entire purse onto the street. They’re all sloppy messes. The girls go to bed in their full clothes and full face of makeup. Gross, guys, you’re going to get wrinkles. Oh wait, actually they have so much Botox, their faces don’t move anyway, so it’s probably fine. Snooki is trying to force Angelina into Vinny’s room.

Then she goes to join him in his bed while Snooki cackles manically. Then Snooki and Jenni go to watch.

Jenni: I’m not trying to watch, but Imma watch.
Snooki: This is Vinny’s worst nightmare but Angelina’s wet dream.

Me: This is disgusting.
Also me:

Vinny: I want Angelina to leave me alone, I’m not playing this game.
Vinny to Angelina: Do you want to f*ck right now? Get in the bed right now.

Jenni and Snooki are on the floor clapping. Vinny then takes his pants off. This is escalating quickly. Vinny and Ang proceed to wrestle in his bed. Why is he encouraging this? Then Angelina digs into Vinny about how he’s nothing without Pauly. Like, what is wrong with these people? Angelina is now mad at Vinny, unclear why? Ang begins bitching to the girls (by girls, I mean Jenni, Snooks, and Ronnie) about how Vinny claims to like Chris (her fiancé) but he doesn’t really like Chris, etc.

Angelina defends herself by being like, “I love Chris, otherwise I’d bang Vinny.” Um. Yeah. Sounds like true love. Also, you did just try to crawl into his bed. Snooki is like, “yeah you shouldn’t say you would bang someone else if you’re engaged, like you can think it, but don’t say it.”

Ang: I wouldn’t bang him, I would dump in his face while he’s sleeping though.

She is actual trash. I need more medication for this.

Mike wakes Jenni up for some reason. I’m not listening. Something about rehab? Jenni is like, “oh sh*t, is it okay that I’m still drunk?” Mike is like, “oh pretend you’re not.” Okay, so they’re going because Mike volunteers at a rehab where he lines up scholarships or something. Mike tells a sob story where he tried to escape from rehab and left in his car and Lauren was chasing him in her own car and Mike got pulled over and claimed a crazed fan was following him. To be fair, Mike was a complete jerk and Lauren kept following him around anyway, so it’s not really that far off.

Angelina wants to talk about Vinny again. Uggggggggh Ang shut up. Ang is like, “oh Vinny loves me, everyone sees it, the faster he admits it the better.” Why does she want him to admit it? What will that help? Snooki tells Ang she needs to apologize for attacking him.

I wonder how Ang’s fiancé Thumb Thumb is going to take all of this. What is he going to say? “Hey Ang, since we’re like getting married, I’d really appreciate it if you’d stop molesting other men, kthanks.”

Vinny starts making fun of Mike for being basically like a television Evangelical, even mocking him like, “It’s like you have to be better and not bitter.” And he’s doing this unironically while wearing a shirt that, I kid you not, says “State of Ketosis”. Like, Vin. You guys are both really annoying. Who knew that rehab and keto are the new vegan and CrossFit?

So Jenni arrives at rehab with Mike and she’s literally sweating tequila. She’s like, “f*ck they’re going to want me to stay here.” Same, girl. Mike is giving some kind of scholarship, which like, are you allowed to do scholarships with stolen money? Like, is this considered a good thing or…? I mean I guess it’s better than spending it on drugs. So they’re talking to people in the rehab and one guy is like, “Oh I watch your show, and it’s so personal to me because I grew up in Seaside Heights.” Yeah, sir. They’re um. Great role models. Then they all pray.

Mike celebrates his sobriety by going to Burger King and ordering half the menu. Is… is he aware food addiction is a thing?

The rest of the gang is going drinking and they invite Deena to meet them for dinner. Supposedly Pauly is showing up at some point too but he’s sure taking his time. He’s barely even on the show now! Mike and Jenni are meeting them at the bar.

Mike: Tbh, going straight from rehab to Jenk’s is so f*cked up.

Uh. Yeah. Yeah it is. Jenni walks into Jenk’s and immediately demands to know why Angelina grabbed Vinny’s crotch. From what I recall, Jenni saw the whole thing last night, so it’s unclear as to why this is being addressed a day later. Angelina says nothing and Vinny blames Jenni for the issue since they instigated it. Vinny tells Jenni on the beach that he’s “done with that psycho” and he’s “living with a troll”. He totally encouraged this behavior, so it’s super weird why he’s now shocked she’s obsessed with him. Jenni and Vin decide to come up with a safe word to say “enough is enough”. He picks “nuclear fusion”. I don’t think he knows what those words mean.

Angelina and Snooki are dancing like mad people and Jenni is like, “I feel like my child is missing.” The rest of the group wants to leave so they put Ronnie in charge of babysitting. Snooki refers to them as “the spiral squad”, which is perfect. Snooki is referring to herself as v mature as she’s falling all over the place. They finally go home and Snooki falls into a bush. Ang is asleep in the cab. Ronnie has had enough and goes inside and leaves them there.

You know you’re in a bad place when Ron has had enough. Jenni collects the trash bags (Snooks and Ang) and Angelina starts harassing Vinny again. Jenni tries to tell her to stop but she does not. Ron tells her this is her own fault for trying to touch Vin’s penis and “to unto others as you want done to yourself”. Says the notorious cheater.

Pauly arrives and the entire mood of the house lifts up. And then all pray in a really creepy, monotone way. Everyone’s like, “oh it’s not the same without you Pauly, the family’s complete now, blah blah blah,” and Pauly is like, “yeah but where is Deena?” And everyone is like, “ohhh right Deena’s not here.”

Then Snooki breaks the news to Pauly that Angelina touched Vinny’s penis, to which Pauly demands to leave and storms off from the table.

Pauly: First of all, Vinny is going to have to take 100 showers before I ever touch that thing again. Secondly, what are you doing touching my man?

Angelina then tells everyone Vin is obsessed with her and that she reminds him of his mother so that’s why he loves her. Ooookay, Dr. Freud.

Vinny then tells Ang to stop talking to him, and Ang is like, “No, you want to marry me.” This is soooooo awkward. Also? Why is she on this? She’s engaged to someone else.

Vin, to be fair, “coming at you” is not leaving you alone. The bickering continues and I zone out in a cold medicine-induced hallucination.

Vin: You were literally on my d*ck last night.
Ang: It was a joke.

This brings me back to college where all the super fratty guys were constantly molesting each other and then calling it a “joke”. Hello, sir, you still touched another man’s junk. That part is not the joke, that is a fact.

Vinny snaps at Angelina and screams at her. Then Ang screams back. They are literal children. Jenni tries to break it up again, Mom in Action. Mike goes to eat dessert in frustration.

In next week’s preview (next week? Seriously, when is the finale of this show?), we see, according to Mike, that “Ronnie’s Tours are back in business”, as Ronnie v obviously cheats on Jen. Ron is all, “there goes my life,” in a voiceover while they show night vision footage of Ronnie in the hot tub with some random girl. To be fair Ron, your life hasn’t been going so well anyway. Until next week!