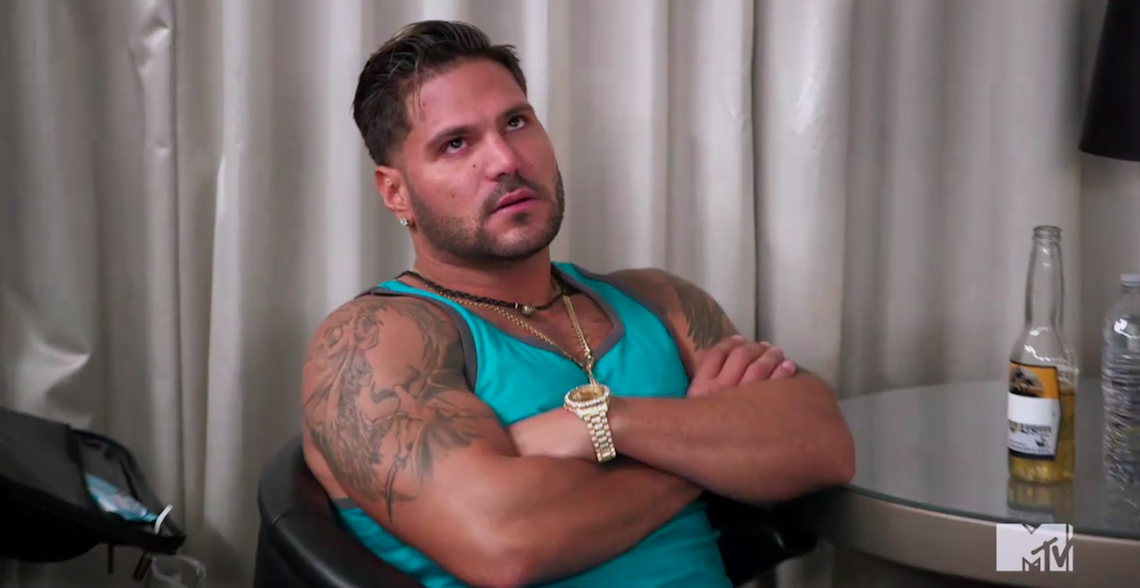 First of all, why is Deena still in the intro when she’s not even here? Like they were too lazy to edit her out?

K. Anyway. Welcome to Jersey Shore Family Vacation Episode 3. So far, Jenni and Ron are still screaming at each other. Ronnie is complaining that Baby Mama Jen is withholding his child based on his behavior. But like, he is acting like a crazy drunk POS. Should that be around the kid? Ron is saying he’s only with her because he’s scared she’ll hide his kid from him. Liiiike. Okay, go to court and figure it out, you psychos. Also, don’t impregnate crazy people. SO SIMPLE. CONDOMS, PEOPLE.

Ronnie doesn’t want his kid to grow up in a broken household. Because a household where Mommy runs over Daddy with a car and drags him is much, much better. SIDE NOTE: Ronnie just said he doesn’t love Jen (shocking). But like they are currently together. So like, instead of being a man and just breaking up with her, this is probably how she found this out. Can’t wait to read articles tomorrow about how she shot him.

Pauly: Fight. For Your Right. To Paaaaaaa-Be a Father.

Is now the time, Pauly?

Ronnie is going home to Jen. I’m sure that will go over super well. Who’s gonna bail him out of prison? Oh look, surprise appearance by showrunner SallyAnn talking him off the ledge.

SallyAnn: Ron, if you go to prison, we can’t film you having meltdowns on the show, and that is a big plot point this season.

Oh okay, so we’re still going to talk about this. I might be pure evil because I find this v v dull.

Ron: I can’t be with this girl.

Well, no sh*t, Sherlock. Detective Ronnie on the case. She is abusive, she’s f*cking nuts, and, oh yeah, you never really liked her to begin with. Be careful who you procreate with, people.

Mike and Vin are stress eating in the kitchen.

Vinny: Sometimes in life, you need to hit rock bottom, (aggressive hand gestures) in order to rise back up.

Mike: A slingshot has to be pulled back. It’s not a setback but a set up.

Vinny: Emotions are like muscles, when you tear them, they come back stronger.

Vinny: Under every stormy cloud, there are blue skies.

Mike: The devil whispered in my ear, that you cannot withstand the storm, and I whispered back, I am the storm.

And this has been douche quotes by douchebags.

Oh back to Ron. Guess what we’re talking about? If you guessed HOW MUCH HE HATES JEN, you’re right. Also, he saw his kid yesterday. Like I get she threatens to take the kid, which is messed up, but you did see her yesterday. I mean, I’d rather go back to Douche Quotes™.

The next day, Mike is off in search of food, which is becoming his entire personality. He’s obsessed with the buffet. Shocking. I hate buffets. It’s all random people touching my food. And breathing near it. It’s gross. Oh cool, Mike is eating before everyone so he can go back to bed and then eat again with everyone else. Mike, I think you have a problem.

Ugh, finally, can you people do something fun now? They’re actually leaving the room and gambling and doing stuff. I mean. I don’t really need to watch people gamble either, but anything to stop talking about Ronnie’s baby drama. Both Snooks and Jenni look like homeless old ladies. Guys, get it together. You’re both on TV and in Vegas, for the love of God.

The gambling is very, very boring. The most interesting thing about it is the profile views of Snooki’s face. Her lips are very far from the rest of her face. I just. I don’t understand how this happens. Snooki, fire your surgeon. Now they’re going to get ready for dinner. LITERALLY this was the entire day.

Vinny is creeping on Mike peeing with the door open. Who would leave the door open when you’re filmed all day long? Oh good, now we’re having a lesson in the proper penis placement for peeing. The thing I noticed most however, is that this motherf*cker did not wash his hands. Men. Are. Revolting.

After touching his penis and not washing his hands, Mike proceeds to grab a communal family-sized chip bag and dig in. With his penis hands. How has no one else noticed this? THIS IS WHY I HATE BUFFETS. Also, they’re about to go to dinner.

Vin: Mike is like an evil villain petting his cat.

(Because of his constant snacking. The cat is his snacks, not his penis.)

Mike with his penis-flavored Doritos:

Oh no, Ronnie is awake now. Guess it’s time for more Jen bashing. I need a drink. This is my fault, really, thinking I could get through this show sober. Ronnie is going to see a lawyer. Let’s see how long this lasts. Let’s really f*ck with him and bring Sammi in riiiiiiiiiight now. Oh good, Ronnie wants to reconcile with Jen. Pauly loses it. Who knew being a DJ made you such a good family therapist?

Ronnie left, and the rest of the group is sitting together, carelessly discussing both Italian food and Italian sausage, although no one has acknowledged Penis Hands still, when there is a knock on the door. It’s f*cking Jen. She comes in looking ratchet af with a huge athletic girl with her, all like “Where’s Ron at?!” It’s like the start of some rap video where the girls go ruin some guy’s life and set his car on fire. Which I would not put past her. She asks where Ron is and if they know about what happened last night.

Everyone: No idea, nope, no idea where he is, he was like sleeping, we were gambling the whole time, he wasn’t here, Ron, Ron who, can you describe him?

Jen spills the tea that Ron was sending her over 300 text messages of verbal abuse calling her a slut, whore, etc. LOVE THIS. Love this about men. He’s crying to his friends that he has no idea why Jen won’t talk to him or let him see his kid (which she did yesterday BTW), all while verbally harassing her over 300 times. THIS IS MEN. Also, I like that Jen is basically tattling on Ron. No one says you have to be with him, psycho. They can’t control him.

Then they show the five camera and sound guys just hovering over them this entire time. I could never be on a reality show, this shit is creep af.

Producer: Super quick, I hear you, Ron will be back around 7 or 8, if you want to come back.

Yeah producer, great idea, let’s schedule an undoubtedly abusive and toxic argument, at around 7 or 8. Oh wait, I guess it’s her job to stir the pot and make everything worse. I saw Unreal, I know how this works. Jen throws a tantrum and rips off her mic and calls everyone a f*cking liar. She’s not wrong.

Everyone is so over it. As am I. Guys, go to dinner at a reasonable hour and leave Ron.

Snooki: When she gets here, we have to get the f*ck out of here.

Snooks is the voice of reason today. What kind of world is this? They’re all running around trying to get ready and leave. I don’t blame them. Run, guys!

Vin: You thought Jen coming in today was crazy until Snooki did her hair.

I actually feel bad for Ron. He has to deal with a sh*tstorm when he gets back and he misses dinner. Jenni is wearing one of those horrible corset belts that is only acceptable if you’re Britney Spears performing. Now they are all loudly praying and Pauly is talking about Jesus.

THEN RON WALKS IN.

Oh good, they can warn him. I highly doubt that Ron told the lawyer all about the 300+ abusive messages he sent the mother of his child. Like, that is a crime, dude. Ronnie is staying home from dinner awaiting his fate.

SERIOUSLY. Jen is like crazy Sammi on steroids. Ronnie just has this effect on women. This is why I’m single. I don’t have time for sh*t like this when there’s pasta to eat.

Oh my God, I just noticed Jen’s shirt says, “The Struggle Is Real”. Yeah, it is when you’re a psycho dating a psycho, Jen. You guys really make it seem like I have my sh*t together.

Everyone else is at dinner and Vin orders 20 things, which is not enough for Penis Hands, who orders 30 other items just for himself.

Hurricane Jen comes up to the door. She doesn’t even knock, she just starts screaming. She’s puffing up to make herself bigger for the fight. Like literally, pulling her arms out and thrusting out her chest. It’s exactly what my bulldog does when she sees people on the street she doesn’t like.

Actual footage of Jen and Ron:

Oh. It ended. I guess we get to see the rest of this next week. Let me guess what’s going to happen. Jen will yell. Ron will yell. Jen will hit Ron. Producers will pull her off. Nothing will be resolved. Producer woman who scheduled the fight gets a raise. Ron does not get pasta.