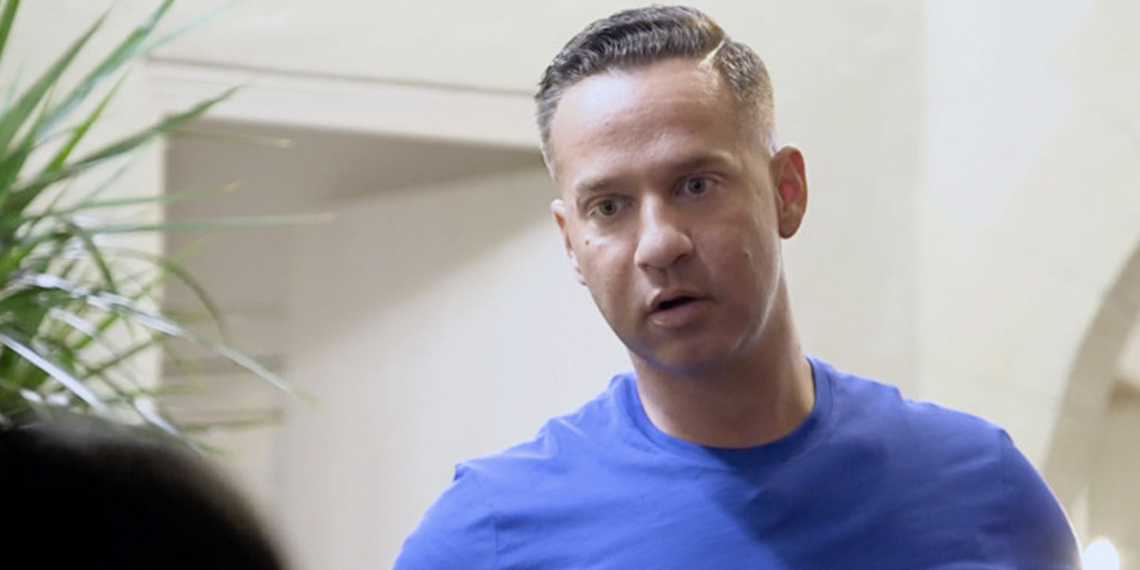 Last week, we left off with two scary-looking women at the house: Vinny and Angelina. Angelina has yet to make an appearance, but judging by her completely newly purchased face, she is still trash and I expect she will behave like trash when she finally crawls out of the sewer to bang on the door. Also? Do people who get total face reconstruction like that fear for their children? Like, you realize your kid will look like your old face, yes? Wtf is Kylie Jenner going to do when her little girl starts to grow up and has no lips and a handsome jawline? Anyway, let’s get into the Jersey Shore: Family Vacation episode 9 recap.

Snooks and Jenni are leaving to go see their kids that probably don’t look anything like them because they also purchased new faces. Doesn’t Pauly also have a kid? He’s just like, fuck that chick, I don’t need to leave all the reality show fun to see that little bastard. Deena surprisingly isn’t going home to see Chris, which means she will spent the next 72 hours sobbing hysterically about it, most likely from the floor. Pauly declares that they need to get rid of “Mean-a” before they go out that night, and sadly, I totally agree with him. Remember when Deena needed to tell Chris she disrespected him by accidentally falling to the floor? I have NO patience for sloppy drunks. It’s not that hard, guys! Have fun, don’t give a fuck about men, and keep your vagina covered. Those are the only requirements to not be labeled a sloppapotamus. I could be seven vodka sodas deep and as long as I thought to match my panties to my dress and continue to be a good time, I’m considered a class act.

All the guys are plotting to ditch Deena, it’s like Mean Girls: Guido Edition and Deena can’t sit with us. Pauly’s idea is to fly her back to Chris—like she could do that on her own if she wanted to, right? It’s not a great plan. Ronnie suggests writing her a note. He never fucking learns, this guy. Wow, they’re actually going with the flight-and-note plan. How could this possibly go wrong?

However, Deena is not exactly a Mensa scholar, so maybe she won’t get that they’re violently forcing her out of the house. She is also wearing a sweatshirt that I SWEAR TO GOD was going to be one of my sorority’s propaganda shirts. Like, the ones that you all wear the same day so that girls that didn’t get into your sorority cry about how uncool they are because they don’t get to match. This particular shirt has purple/blue lips and our adviser didn’t allow it because blue lips is apparently a drug thing (ecstasy? I don’t know, I’ve never been to Coachella) and our T-shirt chair was so pissed she fucking quit the whole sorority over this. Over this exact shirt.

Snooki: Notes are bad news so I hope this is a joke.

Is Snooki aware that she wrote the note last time? Like, not all notes are bad, just the one YOU wrote one time had bad information. And only because you guys were too dumb to just talk to Sammi when it was very fucking obvious that the only people who would tell on Ron were you and Jenni.

Vin: The original note is like the bible. You can’t rewrite that.

Isn’t Vinny like, actually religious? But okay. So this note is basically the same note as Vinny’s bible and loosely implies Chris is cheating on her. V interesting perspective to take on the whole “making this a positive” spin. Also Ronnie thinks appalling is spelled “a-Paul-ing”. As in Pauly, one of six words he knows.

All of us to Ronnie:

The back of the note says, “JK, you’re going to Jersey,” and Deena bursts into tears. In a surprising twist, Deena is overjoyed because she doesn’t want to spend the weekend with the guys. Good for you, Deena, you never have fun when you’re out with them anyway. But like, couldn’t she have just planned her own trip? Is she held captive because she doesn’t have kids? Ronnie and Vin violently hump each other to celebrate the girls leaving. What is wrong with men? I really don’t get this kind of thing, like they’re “joking” but they are still actually humping each other, so it’s not really a joke?

Why are the guys so excited to go out by themselves? All of MVP+R are in relationships besides Pauly, and he hasn’t brought a single chick home. He’s losing his touch. The only one getting girls is surprisingly Ronnie, but again, it’s super easy when your standards are beneath the floor. The guys freak the fuck out because there is a Sammi Sweetheart clone at the club.

I wish I made that up, but he legit just said that. Like, Ronnie, LET IT THE FUCK GO.

The guys go get Fake Sammi, not to be confused with Doll Sammi. OMG, PAULY D wants to fuck Fake Sammi. Wow, I never knew Pauly wanted to fuck Sammi. She went for The Situation first and then Ron, it’s only fair for him to have his turn.

Mike with all the burgers and fries is definitely me when all my friends are with their dates. Like, I’m sorry, my animal-style fries never stand me up and text me 24 hours later saying, “oh sorry, I just got super busy.” NEVER.

Ronnie is now muttering to himself that Pauly fucking fake Sammi is disrespectful to him WHICH IS SO FUNNY because I thought she didn’t look like Sammi, Ron?! YOUR STORY IS FALLING APART.

How is this girl not uncomfortable fucking Pauly while 1) there are cameras and 2) Vinny is in the room watching while eating his burger???

I’m fucking loving the cuts back to Ronnie sitting on the couch, continuing to discuss with producers to what degree Fake Sammi looks like Actual Sammi. He’s just so excited to have any excuse to talk about her. He’s literally going through pics of her on the iPad. HOLY SHIT and then he called a cab to get rid of Fake Sammi? I wonder if Actual Sammi watches this, like his behavior is fucking Fatal Attraction at this point.

Vin: Ronnie is not jealous at all.

Ronnie pulls Fake Sammi out of bed and shoves her out the door.

Ron: Now I know how Mike felt his whole life.

Hm, that’s so weird Ron, because you said you didn’t like Sammi anymore (after you said you were in love with her but w/e) and that this chick did NOT look like Sammi? I’m getting very sick of him, when does Angelina come fuck shit up?

Vin and Pauly: It seems like…. Ronnie… maybe sent home Fake Sammi… because… she looks like Sammi?!

It took them until the next day to figure this out. Mike and Ron somehow get in a fight.

Ron: You can’t have your cake and eat it too, unless you’re Mike.

Is that a fat joke, Ron? It’s 2018, that shit isn’t allowed anymore. Also, super funny he is aware of that expression considering he is constantly trying to HAVE AND EAT THE FUCKING CAKES.

Mike: You’re just an extra at the Shore House.

Ron’s drama is 95% of this show, unfortunately. If anything, Mike is the extra this season, all he does is eat in the corner.

Ron: You can finally put a sentence together.

Must we be reminded? They still haven’t gotten that fixed? Also, why do all the boys run around in a circle?

Ron: Where’s the bus stop, didn’t they take all your cars?

K, that one was pretty good. Let’s hope it doesn’t lead to Mike bashing his head into concrete again.

Jenni is having a “third” life-crisis. Does that explain why she’s been a total bore? The show would be the exact same if Jenni just stayed home. She used to get in fights and write notes and shit, and now she just wears glasses and purses her giant fake lips. The boys are eating cheese and looking at fancy cars. Mike lists his 200 Ferraris he used to have. I can’t believe the IRS managed to catch him with that kind of stealth? Snooks is helping her kids learn. Those poor, poor children. Also, this is making me fall asleep. I have no interest in the boys driving cars. I have no interest in Deena and Chris. Luckily, Pauly is always here for me when the show is getting too fucking dull, because he calls Angelina. I’m actually grateful he called Angelina, that’s how bland this episode got. Poor Sex Doll Sammi is lying in the pool. She has seen better days. Sidenote: isn’t she electrical? Is that not a hazard to throw her in a pool?

Vin: The girls will be so surprised to see Angelina that their faces will actually move.

Angelina is obviously thrilled she’s coming, she missed out on a lot of fucking money by ditching the Shore twice. Oh good, the girls are coming home for the shit show.

What the fuck. We are almost done with the episode, and the Rob Kardashian of Staten Island hasn’t even come yet. Are they pushing this bullshit to the next fucking episode?

My biggest complaint with Angelina’s arrival is that her entrance was clearly filmed separately from Mike opening the door. Like how many times did they rehearse that? So awkward. And she has a fucking suitcase. So she’s staying???

Mike: I didn’t even know you were alive?

Me either, what has she been doing this whole time? Oh apparently getting engaged. Angelina’s engaged, for the third time, to a sanitation worker. Which is pretty funny considering she is trash. Also, Angelina has had three men want to spend the rest of their lives with her? Mike is mad that Angelina said he had a small penis. Like, really mad. Like the amount of mad you would be if you really do have a small penis and it was outed on national television. File this under Shit I Did Not Need to Know.

Oh good, the girls are here!

I waited the whole episode for this and nothing even happened yet. Bullshit, JERSEY SHORE, BULLSHIT. Someone better get punched next week!