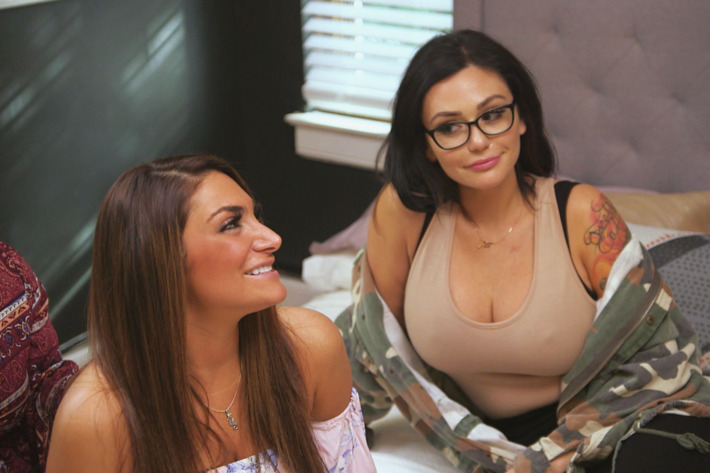 We’ve made it to the third episode of Jersey Shore: Family Vacation, if you didn’t remember that last week was a back-to-back premiere. Thank god this isn’t two hours every week. Anyway. After being left on the tragic cliffhanger that tiny blowup doll Snooki may have lost her very obviously insured wedding ring and may go home because of it, we come back to Snooks sobbing. I mean, it’s day two and she’s already gotten so fucked up she can’t find her rings. Girl, me too. This is why I don’t buy nice things. That and the small detail that I somehow do not make millions from my own reality TV show so I can’t afford shit. Also? Snooki looks v strange crying with the new lips. Oh thank God, they found the ring so Snooki, who otherwise I’m so sure would have really turned down all the money and fame she gets from this show, is staying. Snooki assumes it is Jesus telling her to leave even though they found it. K. I mean, I just feel like Jesus would have better things to do, no?

J Wow: This house smells like rotting asshole.
I seriously always pictured the houses smelling exactly that way, so super glad that has been confirmed. Jenni talks to Mike about his sobriety and blah blah blah drugs are bad and blah blah pot is bad and blah blah—
WAIT, what the fuck did she just say about her secret baby?
Ok, I’m sorry, Jenni and Roger lost a secret baby and it led to Jenni having a secret drug problem, and then she just goes to OG Jersey Shore Italy like nothing happened and NONE of this is ever discussed on the show? What the fuck are the producers doing?  Mike, Mr. Sensitive, directs the conversation back to himself and trying to defend his stupid ass for bashing his head against the wall.
Mike: It was mostly drugs but also because I didn’t know the wall is cement.

Mike, you’re a fucking moron for doing that, it does not matter what the wall is made of, give it up. It’s like a decade later and we’re still somehow trying to say it was the wall’s fault.
Snooki exclusively brought ironic gym slogan T-shirts to wear every day. She makes me sad. Okay, why do they have cellphones and iPads? What fun is it if they get access to the outside world? Is this only under supervision of the producers? Not into it.
Must we, must we, have so many conversations about Ronnie’s inability to use a toilet properly? I am soooo repulsed by him. Malika, what the fuck were you thinking? Vinnie asking the same thing to Sammi Sweetheart Horror Movie Doll is my favorite.
I have no interest in this cutting-edge spider storyline, even if his name is Black Guido. Bitches, you’re in Florida. It’s gross and there’s horrible bugs and spiders. Don’t go there ever. I also have no interest in them rock climbing.
Vinnie: What happens if I let go?
Vin, you’re all strapped up in a harness with a million cords. You will float to the ground like a delicate butterfly. Fuck off.
Having a rock climbing contest to determine who has to clean Ronnie’s nasty toilet is combining everything I hate right now. If only they incorporated the spider into this, I would flip my TV over. Side note: why can’t Revolting Pig Ronnie clean up his own shit? Oh fuck, Snooki is really going to clean it. Okay, but why does Snooki bring a glass of wine INTO THE BATHROOM to clean a clogged toilet?? You’re just asking to get hepatitis at that point.
Oh cool, Ronnie is bragging about how disgusting he is. This makes me hate men. I cannot understand how Snooki agreed to this. Again I have to ask, MUST WE watch this? This is the kind of LITERAL SHIT you want to watch, America?
Deena: I’m not fucking cleaning Ronnie’s shit.
As she dresses in a trash bag and rubber gloves to go help clean Ronnie’s shit. Really love how all the roomies go to see. True roommate bonding. It’s like the worst museum in the entire world.
Actual footage of everyone’s reactions to seeing the literal brick Ronnie shat:

Literally just imagine a parade of guidos making that same face and then running out of the bathroom. Also I just recorded Pauly yelling “OH MY GOD! OH MY GOD!” on repeat for a minute and setting it as my new alarm clock.
Okay, I can’t live like this. If this qualifies for drama, I am quitting reality TV forever. Can we move the FUCK on?
YES, CALL A FUCKING PLUMBER AND STOP TALKING ABOUT IT, YOU NASTIES. Thank God we’re moving on. If only I could stop gagging. But tell me why Snooki leaves the bathroom WITH the wine glass??? At that point you need to just burn it. *Weeps for humanity*

Oh good, Ronnie who cannot cleanup after himself, is talking to his baby mama about the baby she is having. At least she’s used to cleaning shit.
Jen: I’m just like stuck here, by myself…
Ronnie: Huh?
Pauly’s face is exactly how I feel.
Ronnie is like, “See, this is what a totally normal relationship looks like,” even though nobody asked. “Take THAT, Sam,” he says.
All of us:

Lol Deena is like, “I’ve been binge drinking and eating like shit, why do I feel terrible and my hands are swollen?”
Because you’re old, bitch, you can’t treat your body like a trash bag. (But also, I ask myself the same questions every Sunday, so.)
The boys diagnose her with congestive heart failure and also pregnancy. Tbh, that would probably totally check out on WebMD.
The guys talking about how much of a boner killer condoms are is the sex ed lesson NOBODY needs. Like, Deena is over here being fucking responsible and telling the young impressionable youth how she and her husband always use condoms, and then you have Vinny who’s like, “I thought the point of getting married was to stop using condoms?” Like, no, you idiot. The point of getting married is the tax benefits.
Vinnie bitching about not being invited to Snook’s wedding is so funny, like he fucked her while she was with her now husband, yeah, you being there may be a little awkward.
For most people, day drinking on a Sunday means getting shitfaced on bottomless mimosas, but for Vinnie, Sunday Funday means he pound shots at 11am. Sunday Funday Vinnie is sloppy af. This is why you guys should eat carbs.
Also, I fucking laughed out loud at this gang going to Clevelanders, the bar at which I spent the entire duration of my college spring break to Miami. Not sure if that says more about them or me tbh? But I am equal parts triggered and excited. Meanwhile, The Situation looks like the English teacher they paid a little extra to chaperone the school dance.
I relate to Mike eating his feelings since he can’t drink alcohol on so many levels. This is like when I try to drink less so that I can lose weight and then cry into my mac and cheese and somehow I’m still fat.
What kind of contest are Vin and Ronnie in? Unclear. Also, Jenni is SO FUCKING BORING. I take back what I just said about The Situation, because she looks like an actual English teacher who just got off work. She’s still wearing glasses! Even I will bust out the dailies for a day of drinking and debauchery.
Ronnie, Queen of Class, putting “WHO WROTE THE NOTE” on his chest is the exact kind of trash I hope to see. Let’s get this show back on track.
Ronnie: I PUT “WHO WROTE THE NOTE” BECAUSE IT HAS TO DO WITH SAM AND I HATE SAM AND SAM AND SAM AND SAM
K. Ronnie. Seems like you’re a littttttttle hung up on Sam. Let it the fuck go.
God, I wish Sammi was here instead of Sammi Horror Doll, like if this is how he acts when she’s not even around, can you imagine the fuckery that we COULD be watching?

Sammi, please come back next season, I can’t keep watching shit about toilets.
Snooki: I’m a classy, responsible mom now. (pretends to fuck Jenni) (in multiple positions)
Why is Vin humping Snooki’s face?
Vin: I keep trying to face-fuck Snooki and she keeps making it weird.
Ew, Vin following Snooki around the house is sooooo awkward. Vinnie, please God, just eat fucking bread. Keto is not for the weak.
Vinnie: I feel like I’m a leper, like why WOULDN’T she want my dick in her face?
I like how Snooki somehow makes all of this Jenni’s fault. Also?? How will Vinnie creeping ruin your marriage? You can’t tell me you find his creepy junk thrusting enticing, right?
You know, in the old days, if someone told Jenni to fuck off, she’d punch them in the face. C’mon Jen, quit being mature.
OH MY GOD what is with Ronnie’s faces? What drugs is he doing? It’s like he’s picturing what he wants to do to Sam. Or maybe the toilet.
Fucking Vinnie is still talking.
Vinnie: It’s like, I can’t even sit next to her in a cab, and try to molest her, without her refusing to be molested by me!
Totally unfair Vin, it’s almost like she married someone else.
Snooki has now told J-Woww to fuck off, called her an idiot, a bitch, and annoying. Why do I feel like we’re gaining insight to her married life at home?
Mike standing in the corner eating crackers is all of us rn.
And now we’re left with wondering whether Jenni will smack Snooki’s duck lips off her new face. Ronnie better fuck someone soon, I just can’t with the toilet drama. See you next week, Betches.
Images: Giphy (5); MTV