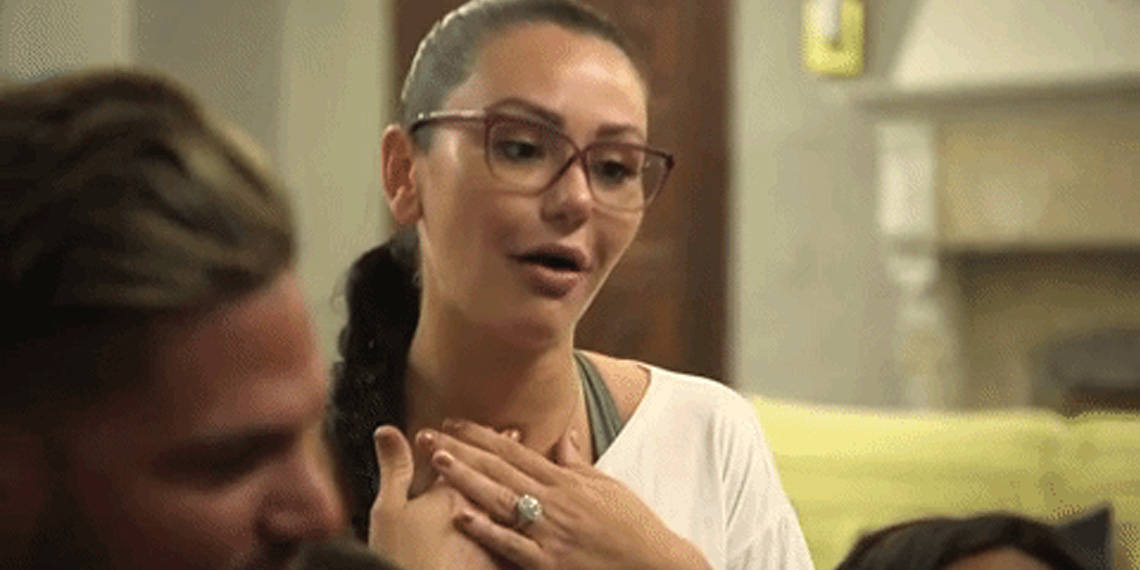 We’ve made it to Jersey Shore: Family Vacation episode 12, I think (wtf how many episodes per season? What am I supposed to watch when this ends? Becca be basic and boring AF on The Bachelorette?), we come in to Vinny’s mom being perfect and cooking for her ungrateful son who isn’t even here. Uncle Nino is v v aggressive and yelling. Then he approaches Sammi Sex Doll.

Uncle Nino: Oh! No teeth! That’s how I like them! God bless America!

Funnily enough, I didn’t even need to be told Uncle Nino was a sex offender, it was just obvious. The gang comes in and Vin is not thrilled Uncle Nino is here. Wasn’t he sooo obsessed with his Uncle Predator in previous seasons? Now he’s like, “Nino, your body is offensive,” which is not cool is say in 2018 but also, he’s not wrong.

Mike The Incarceration orgasms over the Italian cooking. Gross. Control yourself. Oh no, there’s funfetti cake.

Someone please hose Mike down. Uncle Nino is still complaining.

Then he does an impression of both Nino and Ronnie grunting and gesturing and it’s like, whoa dude, you’re right. Uncle Nino is also creepily obsessed with Sammi Doll. And you just fucking know Ronnie was also stoked on her lack of teeth, that sick pervert. Uncle Predator proceeds to try to coerce Pauly into looking at his old, wrinkly balls. Nino then calls Mike “Sanitation” which is the opposite of anything to describe Mike. Then he calls Pauly (?) fat boy. K.

The girls are fawning over Vin’s Mom’s momming skills while Mike mysteriously leaves the kitchen with like, seven knives. Oh, he’s trying to open a coconut. Now he’s smashing the coconut. It’s a miracle someone has not died during this show.

Vin: We’re fucked if we’re ever stranded on an island.

Vinny, I hate to tell you, you are so fucked, and for many other reasons than this. Vin finally busts it open. Does opening coconuts qualify for drama on this show? I’m super surprised that they didn’t edit a trailer for this episode with Ronnie, aka Chunky Chunky according to Nino, saying something stupid and Mike pulling out a bunch of knives. THAT would be drama I’d watch. The girls decide to treat Vin’s Mom with breakfast. So they like, buy a shit-ton of pastries. K. That’s the same as her scouring your dirty-ass house and slaving over a homemade five course meal.

Ronnie regales us with the v romantic story of how he fell in love and decided to have a baby.

Ronnie: I went to Vegas to fuck this chick and within a week she got fucking pregnant.

I just hope I’m lucky enough to find this kind of true love some day. Oh wait, I’d rather kill myself. This is why you should just get a dog. Babies are always covered in mystery sticky stuff (which is the worst kind of sticky) anyway. Ronnie is crying about how he doesn’t trust Jen—that’s fucking rich—and he thinks she’s going to cheat.

Oh okay, because she’s already cheated. Soooo that’s what we call karma. Jenni is saying she feels “soooooooooooo bad” for Ronnie and this explains everything. Well wtf, he cheated on Sammi for no fucking reason, what was his excuse then? Also, there’s a special place in hell for the kind of fuck that cheats on his pregnant girlfriend (*glares angrily at Tristan*).

Deena: Well, YOU CHOSE to stay with her. So you need to move on.

Whoa, what kind of world are we living in where Deena is the voice of reason?? This is not a world I want to be a part of, guys.

Now we’re planning Mike’s  v romantic proposal. Pauly is going to DJ. V romantic club music for the proposal. Jenni has goosebumps. At that SAME FUCKING SECOND, Mike’s ring arrives. How long did the producers hold the ring to bring it to the door at the *perfect* moment? Then they show the ring. It looks like everyone I know’s engagement ring. I wonder if his Gf (whose name I do not recall as she is not interesting) cares that he def paid for this with essentially stolen money. Probs not if she hasn’t run yet?

LOL @ Mike trying to force the roommates to also write what he should say. Like, the fuck? What exactly will you do, Mike? Jenni seems like she wants to just propose to this chick herself. Let’s cut out the middle man. Jenni propose to Mike’s GF, and Mike, go home. Or to prison. Whatever.

Mike is mad that Jenni is taking over his proposal, but like, he also asked her to do everything. He didn’t even pick out his own ring. Oh look, generic blonde girl shows up. No wonder I don’t remember her. Apparently her name is Lauren. Why is every generic blonde chick named Lauren? Hey, maybe if this doesn’t work out, she could audition for The Bachelor. And, btw, what does Lauren see in our favorite Incarceration? He’s broke, possibly going to prison, getting chubby, and v annoying. The things women will do for TV. Or love, I guess. Either way.

Holllyyyy shit, Mike is showing her around and they stumble open a crumbled mess of Sammi Doll in the grass in the dark. Clearly discarded after Uncle Predator got ahold of her. Truly harrowing stuff here. Didn’t realize I was watching a horror film.

Ron suddenly lays into Mike, calling him dumb and saying he’s not a good guy. What. The. Fuck. Ronnie… You are calling someone else dumb? Why is Ron so obsessed with Mike? He also just outs Mike’s v lame prank intentions to fuck with Jenni by throwing a pie in her face. What are we, eleven? Jenni finally, finally shows some personality and loses her shit. She wants to ruin the proposal.

SIDENOTE. What the fucking shit is Jenni wearing? She is ponytailed, glasses, high-neck sweater, to go out in? She’s like the before girl in all those makeover movies, when they try to convince you the drop-dead gorgeous model/actress is an uggo by disguising her exactly like this. Laney Boggs, I can’t even pay attention to anything but your heinous look.

Now Jenni is fucking attacking Mike at the table. Again, all I see is Laney Boggs.

Jenni: I GAVE UP DAYS OF MY VACATION!

Oh, shit, what a sacrifice. Days on her fucking two month long vacation. She’s also doing all this when Lauren could come back at any moment.

Snooki: This is the worst.

Fuck yes, it is. Deena and Lauren are awkwardly sitting outside making v awkward small talk. Mike apologizes to Jenni and they hug it out, ensuring absolutely fucking NOTHING more will happen with either of their storylines. MTV, you make me fucking furious. They baited me that Jenni was going to sabotage Mike’s proposal and instead Jenni was like, “I’m fucking mad,” and Mike was all, “Oh I’m sorry,” and they SPENT A WHOLE EPISODE LEADING UP TO THIS.

Somehow all of this makes Ronnie miserable and he is crying about how much he doesn’t want to propose to Jen. If they hadn’t already broken up, she would be sooooo thrilled about this. OMG, he is crying about Sammi now. He is so, so pathetic.

Yeah dude, we can tell. Also they definitely go into the confession booth on their own. So he’s like, “let me go cry on camera real quick.” Sounds like a nice way to unwind before bed.

Can’t wait for all the NONE FUCKING DRAMA next week where Mike v boringly proposes to v inappropriate club music. I’m such a romantic.