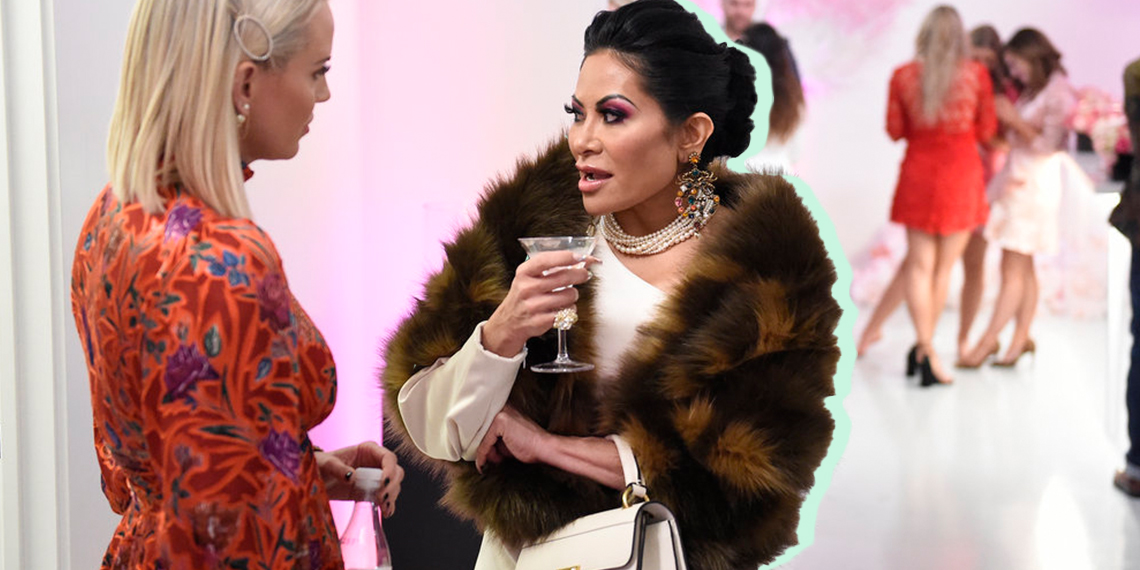 If you’re a real Bravo fan, you’re likely already privy to the latest situation surrounding Real Housewives of Salt Lake City cast member Jen Shah, who was widely seen as the “villain” after the show’s debut season, following several unhinged outbursts and threats of violence against her fellow cast members. Even though she has literally been arrested (more on that in a minute), Shah can’t seem to stop digging her own grave—both professionally and personally. The latest? A new leaked audio message in which Shah seems to bash Mary Cosby and Heather Gay. (Among other things, she calls Mary “a motherf*cking b*tch”. She also seems to say about Heather, “bitch you ain’t an actress” and tells her, “fix your f*cking face.”) If you’ll recall, Heather was one of Shah’s most loyal friends until the end of the season, which is leading me to wonder: between the constant feuds and the legal troubles, is there any future for Jen Shah on Bravo? Honestly, let’s hope not.

In the universe of the Real Housewives franchises, legal drama is about as ubiquitous as tacky Chanel placements. Whether it’s an on-air eviction (Lynne Curtin, Orange County), tax evasion charges (too many to name), or messy divorce proceedings (likewise), courtroom sagas are par for the course. And look—we love it. But probably not nearly as much as Bravo editors do, who will not only beat a legal storyline like a dead horse, but also shove the remains down our throats until we wish to no longer hear about it ever again.

Shah, whose word-salad explanations about her “career” set off alarm bells immediately for me, personally, was arrested alongside her assistant on March 30 on multiple charges of fraud. She is accused of running a multi-year telemarketing scheme that, according to the Southern District of New York’s indictment, involved “building their opulent lifestyle at the expense of vulnerable, often elderly, working-class people.”

The charges are damning and, as far as I’m concerned, should disqualify her from ever earning a Bravo paycheck again. (After the second season, that is, which began filming prior to Jen’s arrest, which—to the delight of viewers everywhere—means we get to witness her arrest, which apparently involved a SWAT team, firsthand.)

And before you say, “But, what about Teresa?!”—let me explain.

Shah and her assistant, Stuart Smith—whose job on the show appeared to be simply chauffeuring his boss around in luxury cars—allegedly conspired to begin running a telemarketing scheme together in 2012, targeting primarily those over the age of 55. Shah and Smith allegedly convinced hundreds of victims to invest in nonexistent “business services” such as “website designing” in order to repeatedly defraud them, push them into debt, and sell their information to a wider telemarketing network who would further exploit them. The indictment reads, “At no point did the defendants intend that the victims would actually earn any of the promised return on their intended investment, nor did the victims actually earn any such returns.” Both Shah and Smith pled not guilty during a Zoom arraignment on April 2, and face decades in prison if convicted.

When I read the details of the case, I immediately thought of my own grandfather, whom I love and cherish dearly. He’s suffered from memory loss and dementia for several years now, and I can’t count how many times I’ve watched him answer the phone, confused, convinced he needs whatever a rogue telemarketer with an agenda is selling him, before my grandmother gets him to hang up (or cleans up the mess after discovering he already got suckered in). I always think, The people on the other end of this phone have no soul. How could they possibly prey on an innocent grandfather like this?

And with leaked audio that sounds conspicuously like Shah calling about repayment of student loans—although the caller identifies herself as “Annie”—many people, including myself, feel disgusted that she may have been involved in this type of predatory cold calling.

In other trash behavior, prior to her arrest, other leaked footage appears to show Shah verbally abusing one of her employees. And, sure, trash behavior and courtroom sagas are to be expected with our Real Housewives stars—to an extent.

Although you probably already know this story, here’s a quick refresher: Real Housewives of New Jersey OG cast member Teresa Giudice was arrested alongside her husband Joe for a number of fraud and tax charges in 2013, and has since made a full return to the show after serving her prison sentence and filing for divorce. It’s also worth mentioning that prior to her arrest, Teresa had already been a Housewives star for more than four years (with one of the most iconic Housewives moments in history under her belt), so her return to the show following her release from prison felt, well, somewhat inevitable. (The Real Housewives of Beverly Hills’ Erika Jayne, rumored to have helped defraud innocent victims alongside her estranged husband Tom Girardi, hasn’t been officially charged yet.)

On the other hand, Shah’s husband hasn’t been charged with any crime, and it’s unclear what he knew, if anything at all, about his wife’s alleged schemes.

None of these crimes are excusable, but when you think about the fact that Shah hasn’t been a Housewives star long enough—and, in my opinion, successfully enough—to have the Bravo fan base’s sympathy, I don’t see her getting another Bravo paycheck after this, nor would I want her to. (And for all we know, that won’t even be an option, if she ultimately ends up getting convicted and sentenced to prison.)

Of course, there’s still one huge question mark: Since Bravo cameras have been filming this saga in real time, how exactly will we see it play out on TV? The storyline will, undoubtedly, take over RHOSLC’s sophomore season—and after viewers recently spotted fan favorites Heather Gay and Whitney Rose playfully taking selfies with Shah on Instagram during filming, I can’t help but feel like even the Bravo world doesn’t fully grasp how serious these charges are. Gay and Rose could have a spectacular fall from grace if they decide to align with Shah, rather than hold her accountable and condemn her alleged crimes.

The bottom line is: I love Housewives legal drama as much as the next person, but directly and purposefully scamming innocent elderly people is where I think we all should draw the line. While Teresa Giudice’s and Erika Jayne’s crimes shouldn’t be excused, there’s something about Jen Shah’s purported criminal “modus operandi” that feels chillingly personal. (Aka, calling vulnerable people on the phone to talk them out of their money.)

What’s worse is that Shah herself has appeared to show little or no remorse since her arrest, continuing to post on Instagram as if she’s merely facing a parking violation. Showing off “Free Jen” T-shirts and glam squads probably isn’t a great look to the prosecutors building a case against you to send you to prison for decades, but what do I know? As recently as April 29, she was spotted filming with her castmates. Many Housewives fans expressed confusion at how disturbingly nonchalant she seems while potentially facing decades in prison. (“I got two parking tickets in a week and cried, Jen Shah is facing federal prison and is going on Instagram Live without a care in the world,” said one Twitter user.)

In my opinion, good Bravo villains—of the Brandi Glanville, or Kristen Doute, or even Teresa Giudice variety—elicit sympathy despite their flaws. Then there are Bravo villains whose cunning actions make them impossible—and even immoral-feeling—to root for. Jen Shah is one of them. (And Erika Jayne, too, will likely be on the chopping block if current Bravo fan reactions are any indicator, especially if she’s charged.)

As Bravo viewers, we have to reckon with the fact that we help make stupid people famous. The one thing we do have control over is which stupid-famous people we choose to support and enable—and when it comes to rewarding a possible criminal with further celebrity, I’d hope Bravo producers and Andy Cohen agree that that might just be a bridge too far.

Milly Tamarez, comedian and co-host of the Betches Sup, returns to the show for a discussion about what makes a great Housewife. They talk about their excitement for the new season of Miami, and which women have try-hard energy. Later, Milly shares her feelings about the upcoming RHONY reboot, and w...