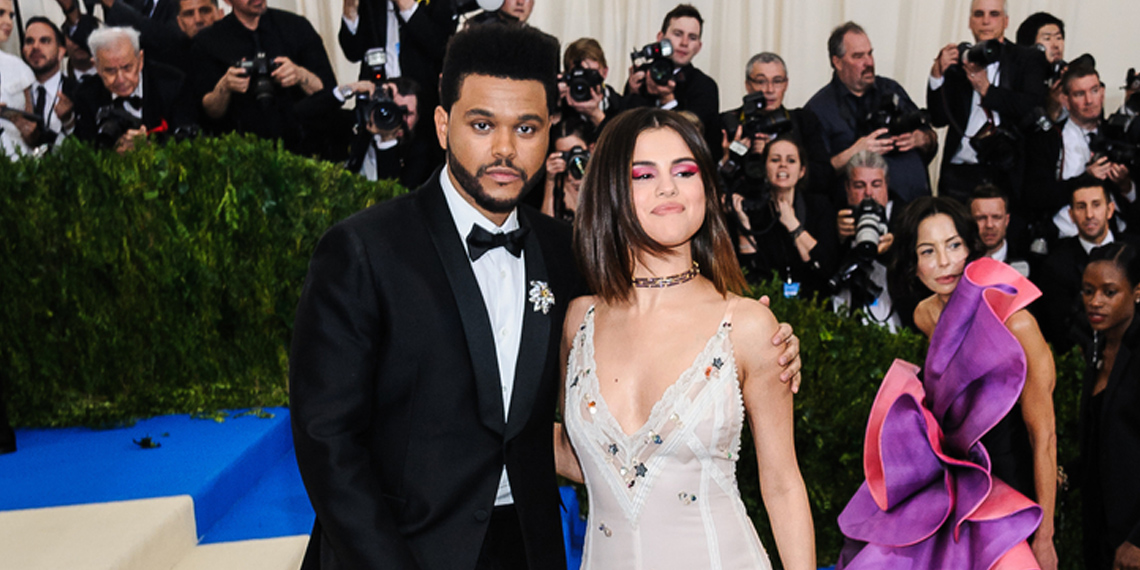 Is The Weeknd Releasing A Song About Selena Gomez? The Evidence

Right off the heels of Selena Gomez releasing a song about Justin Bieber (okay, so like, a few weeks), it seems like another member of the Justin/Selena/Hailey/Bella/Weeknd/Selena/wait-where-am-I love triangle is releasing a breakup anthem of their own. According to the American Society of Composers, Authors and Publishers, The Weeknd registered a song titled “Like Selena”. E! News initially found this out, and honestly, these people need an award because I didn’t even know the ASCAP was a thing, and I worked in the music industry for over two years after I graduated college. Okay, so maybe this is more of a personal problem. In any case, this was a great find.

So, it seems like Abel is back on his bullsh*t, because literally, what else could a song called “Like Selena” be about? Adding fuel to the fire are his recent Instagram story and post. Yesterday, he put up an extremely blurry photo with the caption “the fall starts tomorrow night”, which nobody has really bothered to explain why or how this points to a definite Selena diss track, but probably is loosely related to the fact that The Weeknd has a song called “The Fall”, a song called “King of the Fall”, and his 2014 tour bore the same name. Safe to say, this dude is really clumsy!

The Weeknd also posted the same picture to his stories, captioning it, “tomorrow night we start again.” We hear ya, Abel. It is going down tonight! We will keep our ears to the ground and Spotify memberships ready.

If the song really is about Gomez, it wouldn’t be the first time The Weeknd has talked about their relationship. His 2018 album My Dear Melancholy included what people think are clear references to Selena, with lyrics like “We found each other/I helped you out of a broken place/You gave me comfort/But falling for you was my mistake” (perhaps referencing how Selena and The Weeknd dated post-breakup with Justin Bieber and while Selena needed a kidney transplant); “Ooh, when no one know what love is/And I know it ain’t you for sure/You’d rather something toxic/So, I poison myself again, again/’Til I feel nothing” (probably alluding to her desire to get back with Bieber even though he objectively sucks for her); and my personal favorite, “I said I didn’t feel nothing, baby, but I lied/I almost cut a piece of myself for your life” (which seems like it’s saying Abel offered to donate his kidney to Selena… and I can’t even get a guy to commit to plans, smh).

The Weeknd has also used his other ex, Bella Hadid, as lyrical inspiration, singing on the same album, “Wasted times I spent with someone else/She wasn’t even half of you,” which seems like some clear Selena shade/attempted Bella flattery.

All this proves that The Weeknd is definitely not above writing songs about his exes. But will “Like Selena” actually be about Selena Gomez? Call me crazy, but I actually don’t think so. I think that’s too literal. Even in the past when The Weeknd has been clearly singing about his exes, he wasn’t so dense as to title his songs, like, “La Vita è Bella” or whatever the f*ck. So why would he take such a hard left turn and call her out by name, so long after his breakup with Gomez, when those feelings aren’t even as raw as they must have been in 2018?

When I read a song name like “Like Selena”, I think of songs like “White Iverson”, “Bill Gates”, “Moves Like Jagger”—songs that invoke a famous person’s name as a vehicle for boasting or a point of comparison. And when you think about it, I feel like we, the public, don’t know all that much about Selena Gomez to know what behavior would be “like” her. Ya know? Like, short of getting a kidney donated, what could I, the average listener, do that would be “like Selena”? No, I actually think there’s another answer here: the late Selena Quintanilla-Pérez, who was hugely influential as both a singer, model, actress, and fashion designer. Now that would be a tribute that would warrant using a first name in a song title. And it would also be incredible marketing, to get everyone all psyched for a shady ballad and instead get a homage banger.

Of course, I could easily be wrong, and that would be super embarrassing for me. Let me know if you buy my conspiracy theory or not!