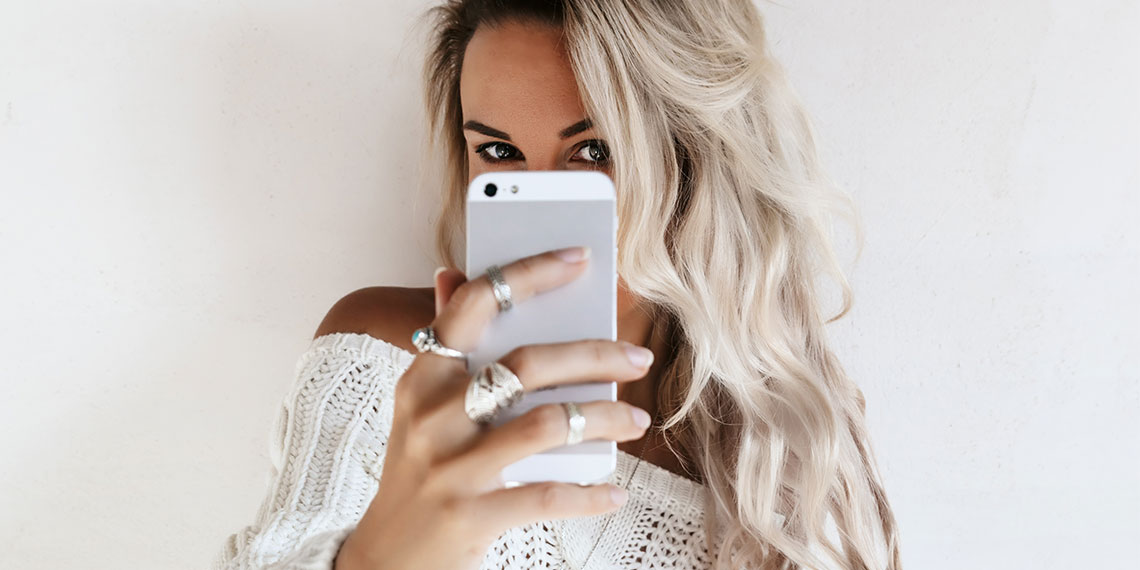 If your Instagram feed is anything like mine, then it’s a never-ending stream of influencers frolicking on the beach, models younger than you walking in fashion week, and of course puppies, because balance is key. In the age of an overly Facetuned, filtered, and otherwise picture-perfect influencer culture, it can be easy to lose sight of what people really look like. Photoshop isn’t just for making thigh gaps and waists smaller anymore—people are also editing the sh*t out of their faces and giving themselves totally new appearances. Now, anyone with a smartphone, so literally everyone, has the ability to make their lips look bigger, their eyes wider, and their jawlines slimmer, all without going under the knife or needle. These are all things that, at a first glance, we wouldn’t automatically assume are fake. We’ve come to expect that people are “fixing” their stomachs or airbrushing their cellulite, but there is literally no limit as to what you can do to alter your face, too. And that’s where the trouble starts. Because with a steady flow of Kardashians and Kardashian-wannabes filling up our feeds, it’s no wonder we have developed an unrealistic standard for our appearances—and this standard is giving us dysmorphia.

Many of us have already heard about body dysmorphia, and now it has a new-ish, but just as scary counterpart: facial dysmorphia. Body dysmorphic disorder (BDD), which includes facial dysmorphia, is sadly super common: it affects 1 in 50 people, which is more than 5 million to nearly 10 million affected in the United States alone. However, a considerable number of us are reluctant to express our internal struggles, and may have no idea that this is even what we’re experiencing. This revelation seriously disturbed me, so I put on my best pair of blue light filtering glasses and got to the bottom of what facial dysmorphia really is, and how we can make it freaking stop.

Okay, first let’s break this down. WTF even is Facial Dysmorphia? Similar to body dysmorphia, which is a mental health disorder in which you are fixated on one or more perceived defects or flaws in your appearance, facial dysmorphia is a mental health condition where you have a warped perception of your face. Factors of facial dysmorphia commonly include distorted views of how your nose, skin, and teeth look.

I spoke with plastic surgeon Dr. Philip J. Miller who further broke down this condition by informing us that, “Facial Dysmorphia is a disorder in which patients cannot stop focusing on a perceived flaw in their appearance. The flaw is typically very minor to others.” It’s a common disorder that the majority of us suffer from to some varying degree. On a lesser end of the spectrum: you know the feeling, you spend an hour plus doing your hair and makeup just to put on a random animal filter and do your best blue steel; and then the dreaded happens—the filter flakes and you’re stuck staring at a triple-chinned, duck-lipped version of yourself. Now, all of a sudden, the hour and a half you spent getting ready means nothing, and you’re alternating between staring in the mirror and your bank account, contemplating if you can afford lip injections and rent this month. Frequently experiencing situations like this can magnify preexisting insecurities and can potentially lead to more severe cases of dysmorphia.

As if these filters weren’t enough, demonstrating what we could look like with poutier lips and perfectly placed freckles, our feeds are simultaneously bombarded with impeccably doctored pictures of Insta models and former Bachelor contestants selling skinny detox tea and obnoxiously smizing. It can be so destructive to have constant exposure to the enigma that is flawless influencer culture, where every girl has the body of Emily Ratajkowski and the face of, well, Emily Ratajkowski—when in real life, she might even have a totally different face.

A key step in battling dysmorphia is cognitive behavioral therapy (CBT), which aims to change the way a person behaves by challenging their beliefs and thinking. It’s crucial to acknowledge that pretty much everyone you’re jealous of on social media has edited their photos in some way or has gotten some degree of work done. They are not Beyoncé, they didn’t wake up like that. You cannot judge yourself against altered images, because it’s completely unfair to yourself. I know you can’t see me, but I’m literally putting my foot down on this. It’s like ordering an ice cream sundae that you saw a picture of and then being disappointed that the scoops weren’t perfectly round and that the nuts weren’t evenly-spaced. It was a picture that probably wasn’t even real ice cream, and those nuts were most likely glued on. The real thing is never as symmetrical or flawless as it is advertised to us, and the same goes for influencer pics—nobody is really as tan, toned, and carefree as they are on Instagram.

Facial dysmorphia has gotten so serious that a lot of people are turning to plastic surgery in order to get the faces they see on Instagram. Dr. Miller acknowledges that he’s seen a connection between the desire for cosmetic surgery and social media trends. He says, “Often times my patients want to emulate celebrities who are most popular on social media.” For instance, he notes, “There has been a definite incline in patients wanting to accentuate their cheeks and jawlines.” Dr. Miller performs an estimated 100 non-invasive procedures a month, with a significant increase in requests for facial fillers and Botox. He also has seen an influx of younger patients, mainly aged 20-30 years old, who at that age you would think may be contemplating adding a night serum or an eye cream to their routine, not plastic surgery. In recognizing the fascination and that we have with the importance of beauty and social media, Dr. Miller has become all the more familiar with cases of facial dysmorphia and the yearn for plastic surgery, as he says, “Facial dysmorphia does not discriminate. I see patients of all ages who suffer from it. I often try to get a strong history from my patients and learn what factors are specifically motivating them to proceed with surgery.”

While there is absolutely nothing wrong with altering your appearance to make yourself happier, it is seriously important to acknowledge the real reasons you’re considering plastic surgery. Dr. Miller advises, “If you choose to go forth with plastic surgery, make sure that you are doing the surgery for yourself, and not to please others. The surgery will not land you a promotion, approval from your peers, or a new significant other.” Preach. Dr. Miller also stresses, “It is crucial that these patients have mental clarity before proceeding with surgery.”

Nobody is immune to facial dysmorphia, and yes, that includes influencers. I had the absolute pleasure of speaking with Tori Deal from MTV’s The Challenge and co-founder of Suiheart Club. Deal, who has an impressive 514K followers, is no stranger to the pressures of maintaining a perfect image on Instagram. She says, “It took me being an active Instagram user for a long time before I realized how bad the facial manipulation truly was. I would catch myself opening a photo editing app, like Facetune, and editing my eyes to be 15% bigger than a normal human size.” She goes on to say, “I would drag my ‘chin-belly’ in until I had the perfect jawline and then I’d head down to my body where I would change it so much until I basically looked like an AI sex bot.” It’s bad enough to aspire to have someone else’s edited and unrealistic body, but now we’ve started comparing our reflections to our own facetuned version of ourselves, and it’s unhealthy. As influencer Megan Gentry told Betches in January, these toxic Instagram standards created real issues that bled into her life off-screen because, as she said, “I wanted to look in real life how I looked in the Photoshop version.”

Deal also gives some much-needed insight on balancing a healthy relationship with your Instagram following, saying that, “The problem is when you hold yourself to that standard. You have to be okay with knowing that if you don’t want to get work done, you don’t have to get work done; and you have to be okay with letting other people do what they want without it being a trigger for you.” While some people (like Gentry) may choose to unfollow influencers, Deal says, “There isn’t anything wrong with following these people as long as you know it’s not a trigger for you, but the moment it becomes something negative, you have to be aware of that.” Make sure you’re checking in with yourself and your self-image. If someone you used to like following is subconsciously (or consciously) making you feel bad, hit mute or unfollow. Banish that toxicity like you did that roommate that “borrowed” your favorite jacket and then left it at some random dude’s house. To take the meme phrase literally, you don’t need that type of negativity in your life.

This commercial conveyor belt beauty is ultimately what inspired Deal to co-found a lifestyle brand, dedicated to spreading positivity and preaching self-love. “My best friend Vira and I created Suiheart Club a year and a half ago to counteract the negativity and the unreal expectations on social media. We wanted to create a platform that makes people more self-aware and optimistic in a light-hearted way. We encourage people to fill their Instagram feeds with posts that nourish the scroll!” says Deal. Trust me, following accounts like this that highlight real people and advocate for self-care practices are going to benefit you far more than staring at yet another picture of Gigi Hadid and crying. Use Instagram to uplift you, not to give you another reason to stress. And if all else fails, there’s always the memes.

For more information and resources for dysmorphia visit the Body Dysmorphic Disorder Foundation.