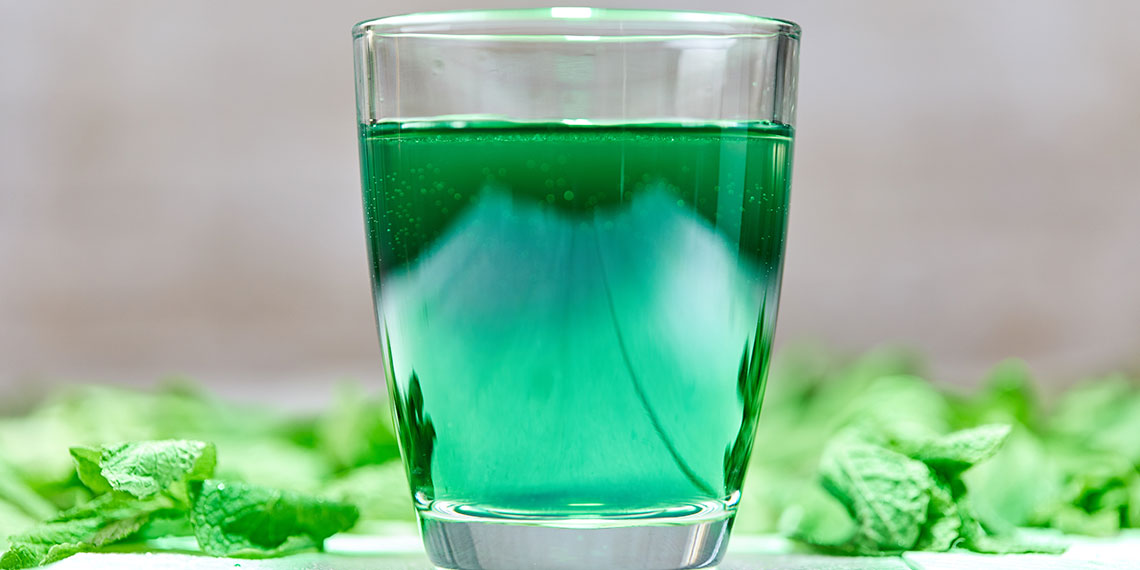 From alkaline water to celery water to not drinking any water at all, it seems like the wellness industry is obsessed with H2O as of late. I mean, I know it’s the essence of wetness and wetness is the essence of beauty and everything, but why do we need to keep reinventing the wheel? And will it ever end? The answer to that final question, at least for the time being, is no, and that’s because there’s yet another type of water on the market that’s making a whole lot of bold claims. Enter Chlorophyll Water, the green water drink that looks like a weird concoction I might have made in 6th grade biology, but that actually tastes amazing and is attracting celebs like Kourtney Kardashian, Mandy Moore, and VS Model Shanina Shaik. I’m listening…

While I wouldn’t intentionally read, let alone try to learn anything from the POOSH website even if my life depended on it, I can’t deny that I’d like to look like Kourtney K. So, I’d like to know: what’s the deal with the latest chlorophyll wellness craze that she and these other hot people are getting behind?

What Is Chlorophyll Water?

Chlorophyll is simply “a green, plant-based pigment that holds the power to translate light into oxygen and energy for plants,” explains Tracy Lockwood Beckerman, Registered Dietitian at Betches. Remember from your middle school science class? She adds, “People are adding it with hopes of obtaining these similar energetic powers simply from drinking water.”

What Are The Potential Benefits?

Besides making you appear up with the trends, studies have shown chlorophyll to:

Work as an internal deodorizer: According to this study administered on 62 geriatric patients, chlorophyll tablets were found to be helpful in “controlling body and fecal odors.”

Detox the body: The study cited above also found chlorophyll to “aid in easing chronic constipation;” while other studies conducted on animals have shown chlorophyll to “promote the elimination of potentially harmful toxins and carcinogens from the body.”

Clear up acne: Chlorophyll-a photodynamic therapy (a treatment that uses drugs and light and in this case, chlorophyll) was used to treat 24 Asian subjects’ acne, in which there were significant reductions.

As you might have already gathered, these studies are quite limited. Testing on animals or on subjects strictly of Asian descent like the studies cited above does not give us the science-backed results we need to feel confident that chlorophyll is a magical cure-all. Beckerman echoes this sentiment by explaining, “until I see long-term, large, randomized, double-blind, clinically controlled trials, I’d be skeptical that chlorophyll is the answer everyone is looking for.”

Did My Experience Line Up?

Nutrition and science and Kourtney K. aside, I wanted to try out Chlorophyll Water in the first place simply in hopes of supporting a sustainable, earth-friendly brand. The water bottles are biodegradable and every case sold plants a tree—which might make you feel better about the $3.33 price tag for a bottle (and $39.99 for a case of 12).

I was definitely weirded out when I realized that the green color was coming not from the water bottle, but from the actual water itself. However, my initial weirded-outness was replaced by a pleasant surprise at the fresh/crisp taste of the water, which I later learned can be attributed to the purification process it goes through. I was honestly pumped to have found a thirst-quenching drink that doesn’t have any hidden sugars and whatever other chemicals MUST be in those weird flavored CVS drinks I’m always buying when I’m hungover. I found myself drinking about two bottles a day for one week.

Despite being tasty and making me look like an intimidating yoga betch (a long-lived aspiration of mine), I can’t say that I was magically more energized or that my skin was suddenly glowing. I suppose I was going to the bathroom a good amount (aka I was not constipated for the Jerry in the back), but as a vegan, this isn’t usually a problem (wow we’re getting personal here), so I’m not necessarily the best guinea pig.

One week isn’t long enough to test much of anything, but the current science doesn’t give us much confidence in chlorophyll as the be-all and end-all health answer, either.

Despite chlorophyll having antioxidant properties, Beckerman is instead urging us to stick to the ol’—wait for it—fruits and veggies concept (it sounds so simple on paper, dammit! *bites into chip*). She explains that the antioxidant properties found in chlorophyll “are also found in blueberries or broccoli, and we know these foods provide the body with anti-inflammatory and disease fighting properties. Why can’t we all agree to eat more colorful foods instead of buying chlorophyll-infused water?” Okay, you got us there.

So eat your damn veggies, and until we have more research, if you’re going to drink Chlorophyll Water, do it for its taste, prestige, and added vitamins (A, B12, C and D).