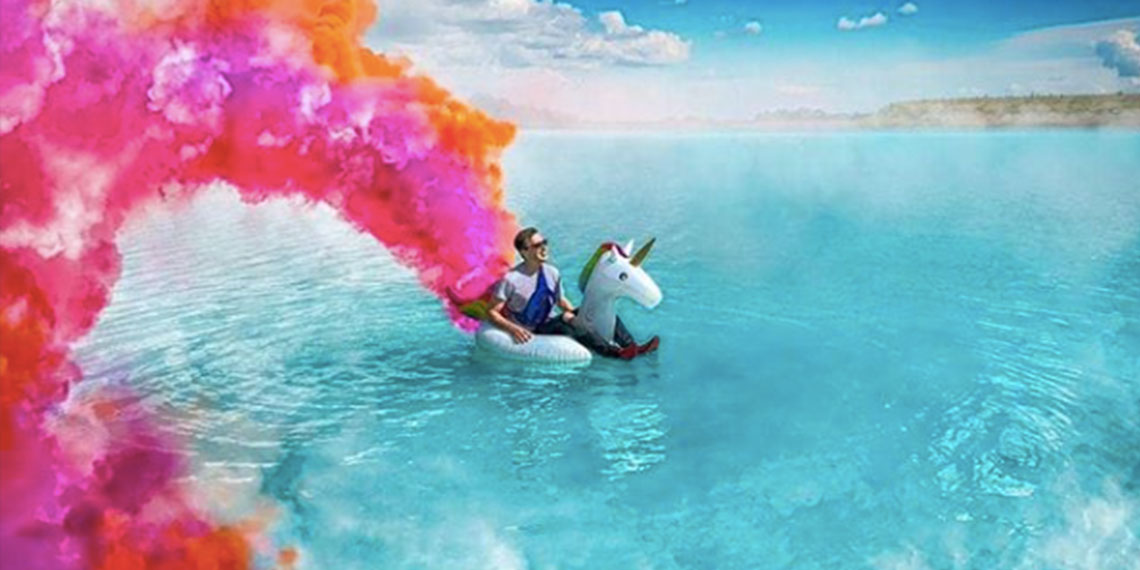 Influencers Are Apparently Taking Pics At A Toxic Lake

Another day, another instance of Instagram influencers being stupid. God, they just never stop, do they? Not that I’m complaining, because it gives me endless article fodder. Carry on, you naive fools! The most entertaining thing about influencers (and wannabe influencers) is the lengths they will go to in order to capture a photo. Legitimately, last weekend, my friends and I watched as this girl stood in the middle of a house party, fake laughing to herself as if she were in the middle of an actual photoshoot, while her friend stood there with an iPhone, snapping pics for Instagram. If you just did that, not in front of a camera, you would look insane. A lot of the time, the dumb sh*t influencers do is pretty innocuous. But sometimes, it can be dangerous—like the Instagram couple who fell to their death while taking a selfie, or the “bikini hiker” who died of hypothermia on a hike. And you would think terrible, tragic stories like these would stop people from doing blatantly dangerous sh*t simply for the ‘gram, but you would be wrong, because PEOPLE recently reported that the newest Instagram destination that influencers are flocking to for photos is… a toxic blue lake.

Say it with me now: yeesh.

Russian government officials are apparently warning tourists to stay away from a body of water that’s been dubbed the Novosibirsk Maldives, after the bright blue water that’s reminiscent of the islands in the Indian Ocean. And, at a glance, it looks like a beautiful place to visit, swim, maybe snap a few pics.

Look at this guy! On a floatie, living his best Instagram life.

Another great shot! Look how blue the lake and the sky are! I want a picture like this for my feed, should I go to the Novosibirsk Maldives? The guy above was in the water! What could go wrong?

Answer: a whole lot! To start, this isn’t a real lake. It’s a manmade pond, basically, and its name in Russian translates to “Lake Ash Dump.” Yikes! That’s because, you guessed it, the “lake” is a dumping site for a nearby coal plant. Even the company that owns the plant is urging people not to go swimming in or fall into the water. “We beg you not to fall into the ash dump in the pursuit of selfies!” they said. “That is the biggest danger.” When the actual company who runs the plant is telling you that it’s just not worth a selfie, you should probably listen.

And if you don’t want to just take the coal company’s word for it, one visitor told the Siberian Times that, after filming “a dreamy video as if she was on a tropical beach,” her face was “covered in a small rash” and she suffered from “a dry throat and nose”. Other visitors have reported the soles of their sandals flaking off after walking along the shoreline, so just imagine what that would do to your skin! The company itself warned, “skin contact with such water may cause local allergic reactions due to high mineralisation.”

So basically, this is the nuclear power plant from The Simpsons. And yet, people are still treating this like it’s the next go-to travel destination.

Guys, come on. This is so not worth it! I get that the waters look really blue and pretty, but this is not necessary. Especially in a day and age when you can just edit your photos or buy presets to make any old image look like it was taken in front of bright turquoise water or completely Photoshop yourself into a different location anyway. See:

I found this post a few days ago and haven’t stopped thinking about it since. Technology is f*cking amazing. If you must get pictures with bright blue water, be like Michaela. Don’t go swimming in a toxic lake. Do. Not. Do it. This has been a friendly PSA.