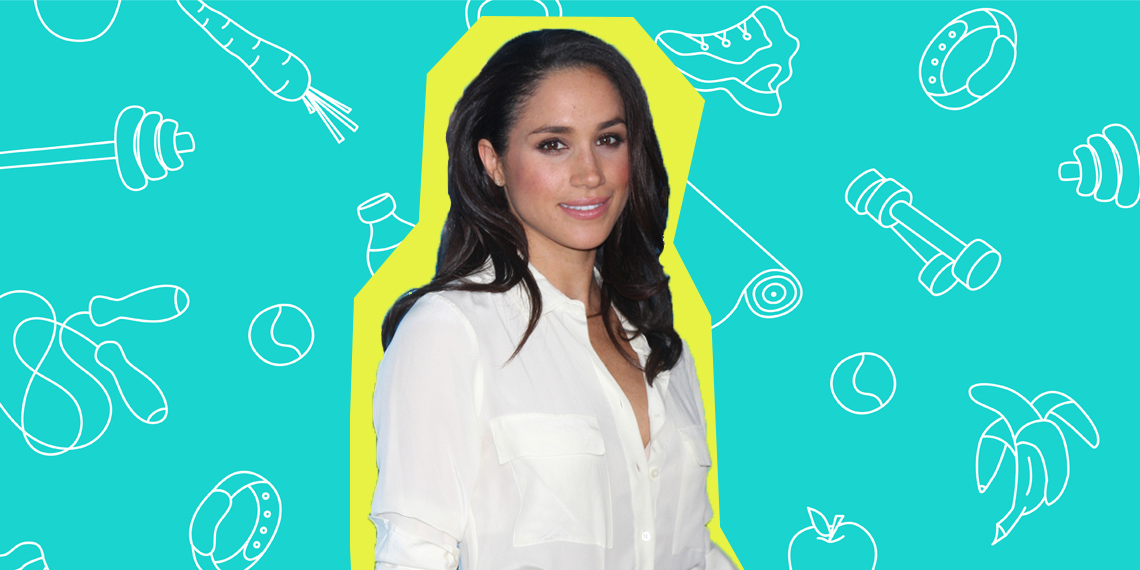 Last Monday, I did a workout class at Fhitting Room, the workout class Meghan Markle reportedly goes to. I decided to go because Brooke Alpert, the author of The Diet Detox (a book I am currently reading about why traditional diets are making us all fat), is crazy about it. Now before you ask, no, I did not see Meghan Markle there. Obviously. But I did see my life flash before my eyes numerous times. Here’s my honest review of Fhitting Room.

First of all, the color scheme of the studio is black and green, so I kind of worried for a second that I was walking into an Herbalife pitch, but that’s probably just because I spent my weekend bingeing Betting On Zero. To be clear, there was no MLM involved—I just spend too much of my free time googling multi-level marketing companies. Otherwise, I walked into the room where the class was held and saw kettlebells, resistance bands hanging from the ceiling, those bikes with the moving handles that create a bunch of wind, and other stuff that generally signaled “interval boot camp-type class.” I should have guessed it by the name, but I tend to go into these (and most) experiences like a wide-eyed newborn baby. Due to a bad experience at another interval boot camp-type class that will not be named (*cough* Body Space Fitness), I was triggered. I re-evaluated my life and my choices and wondered what I’d willingly signed myself up for, other than probable death.

There were two instructors (mine were a guy and a girl—I feel like the girls’ name was Trixie or Lacey or some name that all female trainers have), so as Say Yes to the Betch already said, there was no room to hide. And these instructors didn’t let you hide, either. It was like from the moment you walked in, they immediately pinpointed your biggest insecurity and playfully called you out on. Like, I hate being put on the spot or drawing attention to myself in any capacity, so the guy instructor immediately came over and gave me a hug. Naturally. One of my friends who attended the class with me has really tight hips that she’s apparently insecure about, so the instructors commented on it also. Other than their ability to pick up on everyone’s weaknesses with the acuity of a group of popular 13-year-olds, the instructors were actually very nice and upbeat, and once the workout got started, they didn’t push anyone to go harder than they could and didn’t embarrass anyone for taking a quick breather. They were also really willing to help the struggling people (me) who couldn’t figure out how to do the moves or suggest modifications to make them easier.

The class started, and I died during the warm-up. I’d like to take this time to say that I go to the gym and least three times a week, and I’m not just Snapchatting on the mat just so I don’t feel like I’m wasting $20 a month, but clearly whatever I’m doing at the gym ain’t shit.

Literally me during the WARM-UP.

Not sure if I’ve communicated this effectively enough so far, but the class itself literally killed me. Yes, literally. I’m currently writing this from beyond the grave. Heaven is exactly like San Junipero. Anyway. We did two circuits at a bunch of various stations, like battle ropes, a ski machine, kettlebell swings, and other shit that seemed like it was designed in a medieval torture chamber. I would say my favorite part was when they periodically dimmed the lights without informing us they were doing that, so I wasn’t sure if I was slowly blacking out. As a fun trivia fact, passing out in public is one of my top three fears (there was one time on Yom Kippur when I fainted in the lobby of my synagogue mere minutes before the fast was due to end). The moves themselves were pretty easy to get the hang of, and judging by my inability to move my limbs for days after, they were extremely effective.

After the intervals, there was one final death push at the end, followed by stretching. The air must have been infused with some kind of drug because immediately after I left the class, I wanted to book another one. I got a really good workout—the endorphins were pumping right after I left, and like I said, I was sore for a good two days. I always measure the effectiveness of a workout by my muscle soreness. Is that a good way to do it? I don’t know.

My main criticism of the class was that the circuits weren’t planned out as well as I thought they could have been. For one, there was a group of stations, and when they were explaining how to do each one it was like, “Okay, so this group is doing push-ups over here. But don’t stand one inch to the right because you’ll get hit in the face with the battle ropes, and don’t stand one inch to the left because you might get hit in the face with a kettlebell.” Call me crazy, but I prefer my workout classes without a serious risk of bodily injury except for the injury I may inflict upon myself by doing the moves incorrectly. The other thing was that the stations were organized in such a way that you didn’t really get a break. You’d do like, three arm stations in a row and by the second one your arms were Jell-O so by the third one, I was just devising how to do the bare minimum while still giving the appearance of participating. I feel like they should have switched it up a bit so I could have done my arms, then legs while my arms recovered a little bit, and so on.

Overall I really enjoyed the class and already want to go again, like the psychopath/glutton for punishment I am. If some rich benefactor reading this wants to gift me the money to attend unlimited Fhitting Room classes, let me know and I will include my Venmo handle in the comments.