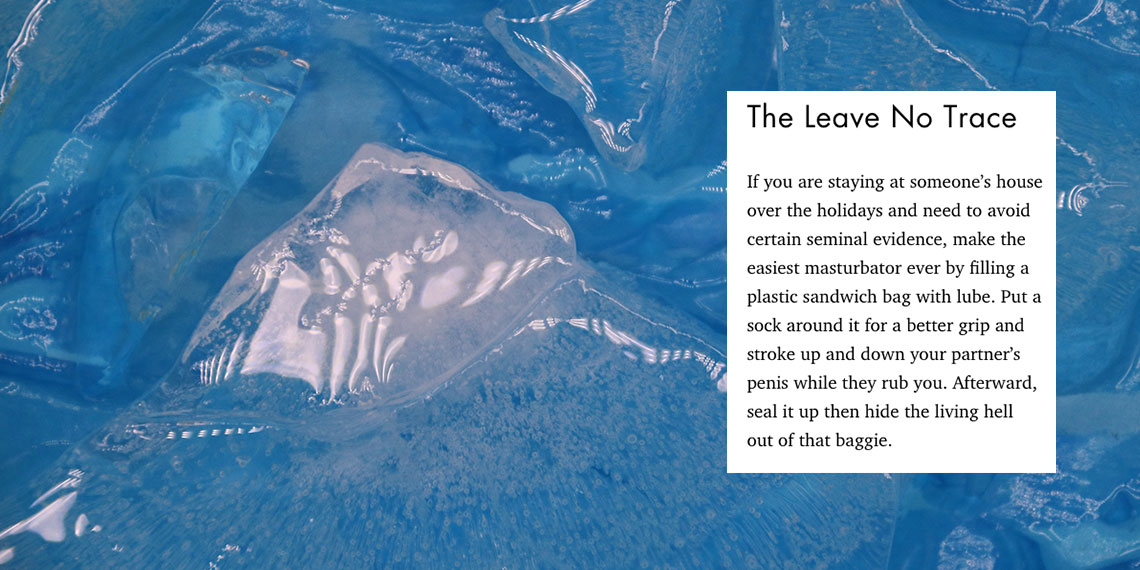 I live for a good headline, so it should come as a surprise to no one that I clicked a story titled, “5 Positions to Use With Homemade Sex Toys”. Just to be clear, I didn’t click and read this entire article on, you guessed it, Cosmopolitan, because I am trying to break into the DIY sex toy industry, but rather because I had a rough morning and needed a good LOL. This article definitely worked.

As the guy I’m seeing continuously reminds me, I’m no sex savant, but after reading a few articles on this ridiculous publication that somehow still exists, I have to say, neither are Cosmo’s writers. I didn’t read the story with the intention of picking apart every little thing because I just don’t have that kind of time, but before I get into it, I would just like to destroy the title real quick. There is never a need to make your own sex toys or vibrators. If you’re traveling and forgot to pack one, an electric toothbrush is not the answer. I read this article with no intention of trying out any of these, but after reading the very persuasive dek (“These sex positions you can—and should—do RTFN.”), I decided they were right: I should do one of these right the f*ck now!

So I did number one and it was horrible. In other news, the pope is Catholic. I first read this “tip” in our article on terrible sex advice when you’re home for the holidays, and decided I had to try this out for myself to try to figure out what kind of deranged person would think this was a good idea. Here is what Cosmo wanted me and this poor guy who didn’t know what he was getting himself into to do:

If you are staying at someone’s house over the holidays and need to avoid certain seminal evidence, make the easiest masturbator ever by filling a plastic sandwich bag with lube. Put a sock around it for a better grip and stroke up and down your partner’s penis while they rub you. Afterward, seal it up then hide the living hell out of that baggie.

First of all, I’m starting a petition to have the phrase “seminal evidence” deleted from the English language. Secondly, isn’t the “easiest masturbator ever,” like, your hand? Third, and perhaps most important, this is just jerking someone off with a lot of unnecessary equipment, and it doesn’t seem like I get anything out of it. If all he has to do is touch my clit using what he normally uses (his hand), why do I need a makeshift condom and a f*cking sock to get him off?

Lastly, if he’s finishing in the sandwich bag (which I’m instructed to hide instead of throw away????), are we not having sex after? This weird rubbing is the whole show? Honestly, not that I ever think about this, but if I did, I imagine this is how Pete Buttigieg prefers to be jacked off. It’s so weird and too sterile to be enjoyed by anyone else.

Anyway, for the sake of journalism, I put my woes aside and spent the money I was planning on using for dinner on $27 lube and plastic baggies. Here we go, folks.

To set the scene, he was laying on his back propped up against all 72 of my pillows and I was sitting on my knees facing him. I know this sounds really awkward, and, don’t worry, it sure was, but this was the only way to do it without getting lube everywhere, which would have been decidedly more uncomfortable. Now, I was off to an awkward start because I haven’t actually given a hand job since high school, I think, and kind of forgot what to do. He was laying there looking like he’d rather claw his own throat out than let me put his dick in a lube-filled baggie, but because he’s an angel, I guess, he let me get a few strokes in before we officially agreed this was f*cking awful.

Honestly, this wouldn’t have been so bad if I could have muted the baggie, which sounded like unwrapping one of those butterscotch candies at your grandma’s house. My guy didn’t seem to mind the crinkly sound, but I did, so I tried to cover it up by rambling complete nonsense. Turns out that kinda kills the mood!

As far as the the sock, we didn’t use one because we didn’t see the point unless we were using a barre sock with grips on the bottom. Wouldn’t a very smooth sock against a very smooth baggie make you lose your grip as opposed to making  it better?

Anyway, even though I sincerely tried to make this a good experience for him, there was something violently unappealing about stroking someone’s dick that’s both drenched in lube and wrapped in a f*cking ziploc bag that made me want to call the whole thing off. For the record, he didn’t hate it as much as I thought he would, but I just couldn’t get past the fact that there was a plastic bag between my hand and his dick.

If I don’t win a Pulitzer for journalism after this, I quit. I did learn one valuable lesson, though, and that is: lube is low-key an important substance to have handy. Just for sh*ts and gigs the next morning, we put some of this on before sex and it was quite possibly the best sex I’ve ever had. He also definitely enjoyed me putting it on beforehand (probably because no baggies were involved), so maybe Cosmo should write about that instead of instructing women to suck on a f*cking ice cube seconds before going down on someone? Just a thought.