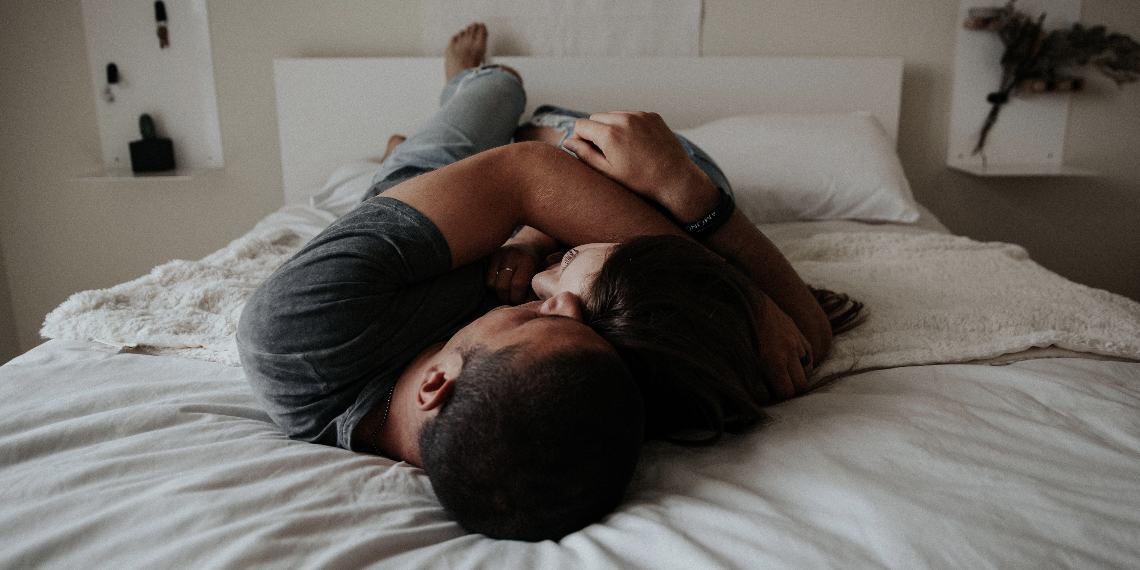 We all know Cosmo is THE Bible when it comes to anything sex-related, or at least they like to act like it. So who better to turn to when your love life is in need of a jumpstart, or if you want to try some new tricks in the bedroom? They give good advice sometimes, but a lot of the tips they give are more fit for an Olympic gymnast than your average betch. There’s nothing I like more than a challenge, so I kindly asked my boyfriend to try out these Cosmo sex tips that they’ve deemed “extra-romantic.” Aaaand I also made him agree to let me write about it on the internet. Why is he still with me? I will never know. But here we go.

We originally were going to try these positions over a few days, because sex is a legit workout (as we already know). But we were feeling ambitious, and slightly competitive, so we challenged ourselves to see if we could do them all in one night. And we did. Honestly, it’s been a couple weeks, and I’m still tired. So did the so-called “extra-romantic” sex positions live up to what was promised? Here are all of my thoughts.

The Position: You and your partner lay on your sides facing each other. Lift one leg over his hips for easier access.

Why It’s Romantic: Cosmo suggests this one as a lazy morning position. It’s uber-romantic because of all the “deep kisses, hugging, and stroking each other’s bodies.”

The Verdict: The name does not lie. While they aren’t wrong about this romantic position being a lazy alternative, morning breath was definitely an issue. I love my boyfriend and feel 100% comfortable with him, but my breath in the morning is neither cute nor romantic, and I don’t need to make him suffer through that. Although Cosmo suggests freshening up in the bathroom before, I’m not down to falsely advertise that I woke up like that. But regardless, the real reason I didn’t love this position is because of all the twisting in ways my body just isn’t supposed to move. I have to say, this isn’t going to be a frequent position in our repertoire. Thank u, next.

The Position: Start in Girl-On-Top (a fan fav) but keep your legs together in between your Bae’s to create a tighter feel.

Why It’s Romantic: Cosmo claims that having a girl who knows what she is doing is hella sexy. Plus your boobs are in his face.

The Verdict: So if your SO isn’t especially well-endowed, then this is one Cosmo sex tip you won’t want to forget. I’m not gonna brag but…my boyfriend didn’t fit. So we moved on to the next position v quick.

The Position: Start in Reverse Cowgirl and lean forward so your back is flat and your chest is resting on his legs.

Why It’s Romantic: Men are visual creatures–letting him feel AND see you is going to go over real well.

The Verdict: I don’t know what is supposedly lazy about this cowgirl, because I was doing alll the work. But I have to say, this position was a winner. Not only did my boyfriend get to watch my ass the entire time, but I got to watch Friends while this all went down. Win-win. Since testing this out, we’ve incorporated this particular sex tip into the bedroom routine.

The Position: Your SO sits up with his legs straight in front of him and leans back with his arms supporting him. You climb on top, with your legs bent on either side of him and leaning back on your arms as well.

Why It’s Romantic: According to Cosmo, this position allows for deep eye contact, which is v romantic.

The Verdict: Cosmo admits that this one “is tricky to get situated” and boy, they were not wrong. My problem with this position is that you kinda start squishing his legs after a while (unless you are a size 00). But besides that, you get to lean back and your boobs are on display for him to see. If you’re fine with eye contact, this one is perfect for you, but we found it awkward to just stare at each other but be too far away to make out.

Position 5: Two Of Hearts (AKA Lotus)

The Position: Better known as the Lotus position. He sits with his legs crossed and you sit on top of him with your legs wrapped around his back.

Why It’s Romantic: Basically every inch of your bodies are touching, which is fab. According to Cosmo, you should “Take your time and kiss him deeply, suck his earlobes, and whisper dirty/lovey things in his ears.”

The Verdict: If you thought the position above was difficult to get into, you are in for a rude awakening here. Having my entire bodyweight on my boyfriend is not an ideal position for me, but we tried it anyway. What I did like about this position was the ability to make out and the lack of awkward, distant eye contact. Cosmo suggests that for “extra decadence” you have champagne and chocolate strawberries on hand to feed each other. But this girl is on a budget and has white sheets, so we passed on that.

Even if my boyfriend and I don’t have a dead bedroom, it was still fun to try all these different positions. Although most of them will not be repeated anytime soon, we did have fun and some good laughs. I wouldn’t whip these moves out on a first date, but they’re fun to try if you feel really comfortable with your partner. Of course, sex should always feel good for all parties involved, so don’t do anything that makes you feel uncomfortable. Just one final note: if you and bae are thinking of trying any (or all) of these, I’d suggest not trying them all in the same night…just trust me.