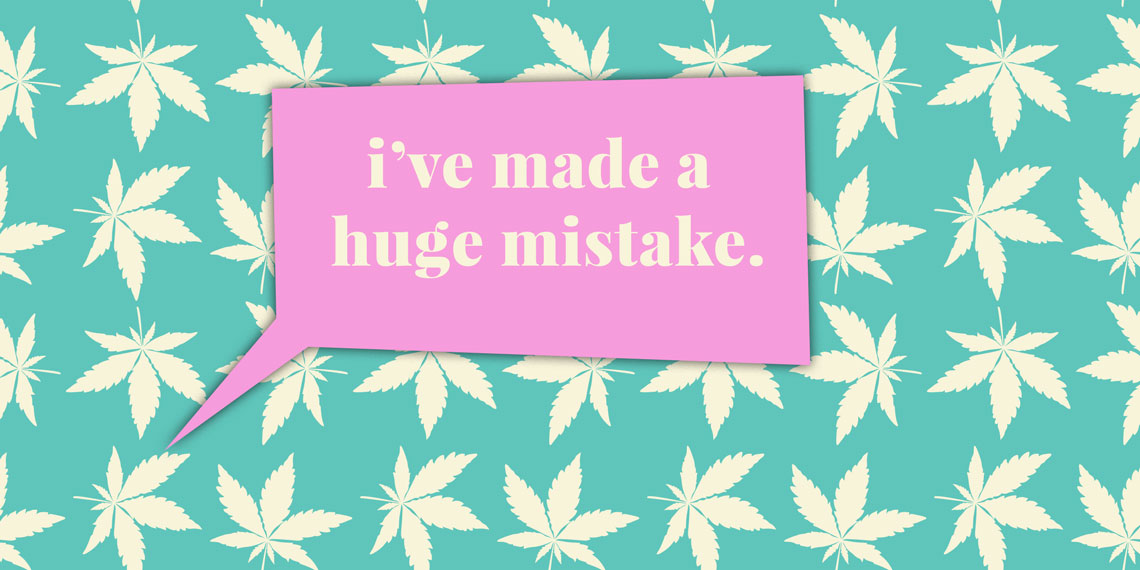 I Drank CBD At Work & Here’s What Happened

I have been described many ways, but calm has never been one of them. I won’t go on to detail my specific neuroses, because no one cares, but suffice to say that no one has ever looked at me and gone “Wow, what a chill girl. I bet she gets a fulfilling and peaceful eight hours of sleep a night.”

I don’t tell you this because I’m one of those people who thinks having anxiety in the year 2018 is a fun and relatable quirk rather than just a byproduct of being alive. We all know that person. Thinking of them, in fact, makes me less calm than I was mere moments ago. I tell you this so that you’ll understand that when I was offered the opportunity to test a drink that was “designed to combat stress, increase relaxation, and improve overall mental and physical well-being,” I didn’t even think twice. I typed YES so aggressively into my keyboard that the Y key flickers from time to time.

Me, at any given moment of any day:

A few weeks back I trialled a Dirty Lemon product called +collagen, a marine collagen peptide drink that was meant to “hydrate skin, increase elasticity, reduce wrinkles and trigger new collagen production.” I’d been seeing it all over Instagram and had wanted to test it out, so I asked Dirty Lemon to send me some so I could write about my experience. They kindly obliged, and what resulted was this article that some thought to be an undisclosed paid sponsorship. It wasn’t, but seeing as how I never properly addressed the circumstances, I get why that misconception occurred.

So when Dirty Lemon reached out to me with news of a new product that could potentially calm my ass down for a few hours, I thought it was a great opportunity to clear up my earlier gaff as well as attempt to experience this phenomenon that people have referred to as relaxing. A win-win in my book.

Enter: +cbd. That’s right ladies, I drank CBD for a week and as a result I now suffer from a crippling addiction to the British reality show, Love Island. Don’t see the correlation? Don’t worry, we’ll get there.

Like THC, the part of weed that actually gets you stoned, CBD is a cannabinoid derived from the cannabis plant. Unlike THC, there are no psychoactive properties to CBD. So instead of feeling high as hell and debating a run to Taco Bell, you are supposed to just feel at ease (and are probably still debating a run to Taco Bell but only because you genuinely enjoy it). In fact, many believe CBD to have wide-ranging medical benefits, from relieving anxiety, depression, arthritis and diabetes to staving off heart disease and Alzheimer’s.

Although still federally illegal, CBD has become all the rage since it made news in 2013 for its part in treating a 5-year-old with a severe epilepsy. More recently, it’s been making the rounds in high-end wellness circles, appearing in cocktails, juices, and even skin care products in major cities across the US. Seriously. People will put it in anything, including Instagram famous beauty tonics.

Before this experience, I was no stranger to CBD. I do, after all, live in Portland, Oregon, where at any given moment I am a stone’s throw away from some high-end boutique dispensary pedaling everything from your run-of-the-mill weed to cannabis-infused hot sauce. But I’d never drank CBD before, and I’d certainly never consumed 20mg of it at a time, which is what each bottle of +cbd contains.

Considering the fact that the cute CBD mints I’d been relying on previously were a measly 5mg a piece, this seemed a bit daunting to me. So much so that I reached out to Dirty Lemon for some kind of guidance. Surely there had to be regulations in place, like not mixing with alcohol, not operating vehicles, not going to work and attempting to complete real tasks, right?

Wrong. According to them, this calming elixir was safe to drink in any of these environments, which I absolutely refused to believe. In hindsight this could make sense, considering LA yoga moms are drinking it in their midmorning juice cleanses, but I was still shocked. So naturally, I immediately set out to test out the breadth of +cbd’s capabilities by drinking it in as many settings as possible.

After some brainstorming about the times in my life when I wished I could just chill out, I landed on four scenarios: at work, on a deadline, hungover, and when I’m literally just sitting at home attempting to force myself to relax. What I found through the course of these trials is that, more often than not, these four events bleed into one another rather than occur independent of each other, probably because I’m a human disaster.

I chose a specifically low-key afternoon to dive into +cbd: we had a going away party scheduled to start in a few hours, half the office was out, and my only real task to accomplish before the day ended was to watch a documentary about Nigerian football. If this is what your day-to-day life looks like, then you’ll probably be okay drinking +cbd at work. However, if you’re expected to do anything more than watch a movie, sit through a farewell tribute, and then head to a party, I wouldn’t recommend it.

True to Dirty Lemon’s claims, I was calm. So calm that I all I really wanted to do was sit on the couch and scroll through Tumblr. I excelled at watching that documentary, getting an in-depth review of a coworker’s wedding pictures, and eating fondue at the after party. But, had this been a day where I’d been expected to be anywhere near a normal amount of productive, we might have had a problem.

Conveniently enough for this article but inconveniently for my own existence, I found myself the morning after said going away party cripplingly hungover at work, stressed out about being both hungover and at work, facing a deadline, and dreaming of Hawaiian food. In short, truly living my best life.

Due to the experiences of the day before, I saved my +cbd as a reward for when I eventually left work, though the likelihood of surviving that long seemed rocky there for a while. By the time I drove my sorry ass home that night, takeout bag in hand, I was ready to melt into my couch and succumb to a few hours of trashy reality TV.

On a normal night, I would have gotten 30 minutes into The Bachelorette and four bites into my dinner before I passed out, living out the wild mid-twenty Friday nights that my teenage self no doubt dreamed of. But thanks to the numbing effects of +cbd and my own determination, I somehow found myself five hours deep in a binge of the UK’s single greatest export: Love Island. I can assure you that there is no hyperbole in the following statement: it has bewitched me, irrevocably, body and soul.

Due to the hectic nature of work and the holiday weekend, I found myself spending the next couple nights at home on my couch, +cbd in hand, diving further into the world of British reality TV. All I can say is that they were the best nights of my life. Sometimes I was stressed, sometimes I was hungover, most of the time I was watching Love Island, but through it all, the +cbd was there to make me not care.

I laughed, I cried, I lamented the logistics of what I’ve now come to understand is a Liverpool accent. I found love in a truly hopeless place: hungover on my couch, and I like to think +cbd played a vital role in that.

Things that +cbd is great for: combatting the extreme Sunday scaries that always seem to accompany the end of a holiday weekend.

Things that +cbd isn’t great for: helping you finish writing an article about +cbd on the Sunday at the end of a holiday weekend.

I found myself last night, stressed out, suffering from a debilitating case of writer’s block and even more debilitating case of Love Island withdrawal due to the fact that Hulu has a week long delay on episodes, facing a nearly blank word document and eyeing the last +cbd in my fridge.

Cut to 45 minutes later, when I was no longer concerned about things like word counts or work days and suddenly the new owner of a VPN, purchased specifically so I could watch Love Island in real time from the ITV2 website.

Am I proud? Yeah. Did I wake up, even more stressed at 5am to finish this? Yeah. Would I do it again? I think you know the answer to that question.

In short, +cbd was a good time and accomplished what it set out to do: help me relax. I’m not sure I’m a calmer person as a whole or suddenly possess a healthier mental state, but I do have a new show to discuss ad nauseam to the distress of every single one of my coworkers. And you know what? That’s so much better.