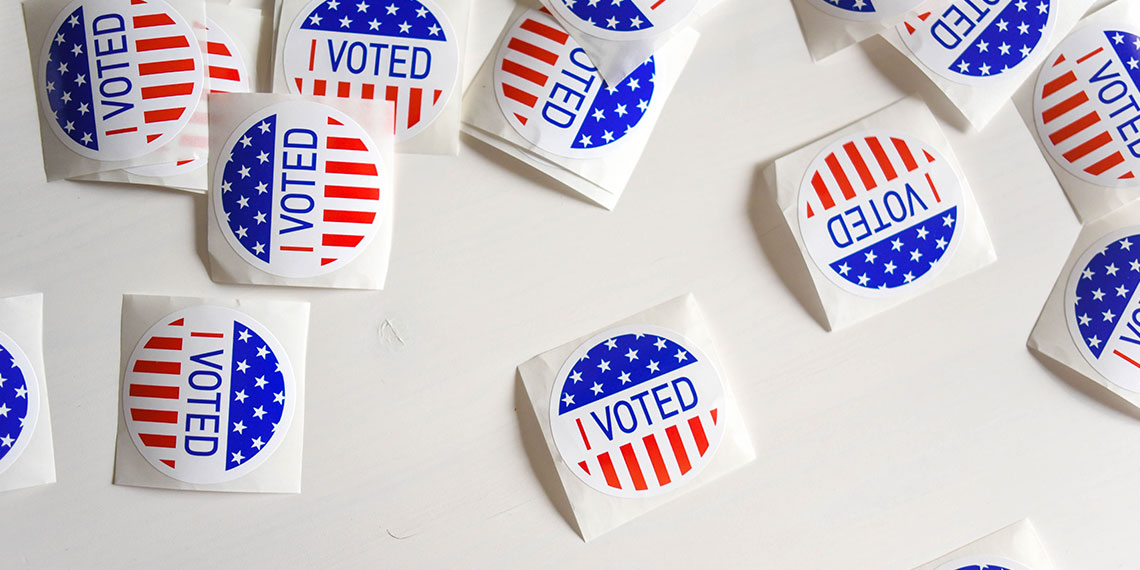 I Am A Black Woman. The System Has Not Served Me. Here’s Why I’m Voting Anyway.

The matriarchs of my family have always treated voting as a sacred ritual. Not a single election went by during my childhood that my mother did not bring me to the polls to watch her vote. Whether that meant waking up before the sun to drive to our nearest polling place so she could cast her vote before she dropped me off for school, or being among the last voters in line, exhausted after a long day’s work, quelling an inconsolable tween whose primary concern was whether we’d be going to Burger King after, my mother always upheld her civic duty to vote. And she always made sure that I, her only daughter, was present to watch.

See, to my mom, a child of the civil rights movement, born in the 1950s, voting was a privilege. It was the be-all and end-all. It was a right that had been legally and systematically withheld from Black people—Black women—for so long, she felt it would be nothing short of a slap in the face to her ancestors to voluntarily deny that privilege. My grandmother, born in the 1920s, felt the same. After all, her great-grandparents had been slaves, hardly able to visualize the prospect of freedom, let alone the ability to exercise the right to vote—a power that was historically reserved for white male property owners. It simply was not an option for my mother or grandmother to choose to forfeit their voting rights given the historical gravity and laborious terms surrounding the acquisition of universal suffrage.

Our family’s voting ritual culminated in 2008, when my grandmother, mother, and I went to the small church two blocks away from my grandmother’s house, which doubled as a polling station, to cast their votes for Barack Obama. The act was monumental at the baseline because two Black women were exercising their rights to vote, a radical act that the founders of the Constitution never intended. But that day was made infinitely more significant because two Black women were voting for a Black man, who would, of course, become the 44th President of the United States. (The day was significant for me because I got to go to Burger King after.)

The generations that preceded me rightly held voting to such a high standard because they directly had ties to a world where Black enfranchisement wasn’t the norm. My generation, on the other hand, is significantly more disillusioned. While we are keenly aware of our history and the struggle endured to acquire the universal right to vote, we also are able to see the cracks beneath the surface. The radical injustices associated with a system that proclaims itself as just. If my mother and grandmother’s generations saw the right to vote as the be-all and end-all, the almighty Oz, my generation’s unique gaze beholds Oz as just a man—and he’s white, self-interested, and a master puppeteer.

It’s no secret that the relationship between voting and Black America is a long, complicated one. From its inception and for almost the first 100 years of American history, Black people were denied the right to vote—simply because they were not white, not property owners, and not regarded legally as a full person. The 15th Amendment, ratified in 1870, technically granted Black (men) the right to vote, however many southern states utilized a plethora of tactics to prevent them from actually being able to do so. Literacy tests, poll taxes, gerrymandering, and grandfather clauses were among the many strategies employed to promote Black disenfranchisement. The Voting Rights Act of 1965 sought to rectify these unjust practices, as it was the first piece of legislation to formally prohibit racial discrimination in voting. But still, racist officials and lawmakers found loopholes within the system to prevent Black people from exercising their voting rights. The creation of voter ID laws, the illegitimate closing of polling places, and the reduction of early voting rights are all ways in which voter suppression still, to this day, plagues the Black community. So while the triumphs of acquiring Black enfranchisement were at the top of mind for my mother and grandmother’s generations, the somber realities of discriminatory disenfranchisement practices are jarring truths that mar my generation’s outlook on the subject of the vote.

I want to be very clear: I am a Black woman and I will be voting in November. And, at the risk of sounding like an episode of Schoolhouse Rock, you absolutely should too. Maybe it’s naïveté, or maybe my mother and grandmother’s voting had tremendous lasting power, but I am of the unwavering opinion that if you can vote, you must. And if you are Black, I mean this tenfold. No, not because our ancestors fought for this right (I do not believe in guilting people to vote), but because far too much is at stake to deny ourselves this right. In the words of Aubrey Stone, President of the Black Chamber of Commerce, “We cannot expect to win with every vote, but if we don’t vote, we can certainly expect to lose.”

I’ll admit, it is exhausting to vote in a political system where your community is not only underserved, but systemically under attack. Almost 50 years after the Civil Rights Act, the racial wealth gap suggests Black men still earn 87 cents for every dollar earned by white men. Almost 66 years after Brown v. Board of Education, racial inequality in our education system still persists as Black students graduate at drastically lower rates than white students, and are more likely to be expelled, less likely to be invited into gifted student programs, and more likely to be overlooked by teachers. According to the Bureau of Justice, 1 in every 4 Black men is likely to go to prison, whereas 1 in every 23 white men is projected to serve time in prison. Black women who give birth in hospitals that primarily serve Black communities are far more likely to have serious health complications than women who give birth in “white-serving” communities. And as we all were reminded this year after the deaths of Breonna Taylor and George Floyd, even though Black people account for less than 13% of the American population, they are still twice as likely to be shot and killed by the police. The system is downright abhorrent for Black Americans. But the answer isn’t for us to not vote. The answer isn’t to self-serve defeat because defeat is expected. I can’t recall any victorious historical movement that was achieved through the passive act of surrender.

The truth is, while suffrage isn’t the all-powerful Oz that my mother and grandmother once proclaimed it to be, voting is a tool that has considerable power and influence in drastically improving our daily living standards. In the upcoming November election, specifically, we’re voting in the hopes of increasing the federal minimum wage, ending the cash bail system, restoring the Voting Rights Act (which was compromised by the Supreme Court in Shelby County v. Holder in 2013), and increasing federal funding for public schools. For minorities, in particular, we’re voting to reinstate DACA, advance the enactment of the LGBTQIA Equality Act, rescind the Muslim-targeted travel ban, and decriminalize marijuana. Access to affordable healthcare, tuition free college, and investment in climate change programs are also all among the many political initiatives that will ultimately be decided by your vote.

And yes, I do specifically mean your vote. I’m cringing at the children’s television-level soapbox I’ve unintentionally found myself standing on, but your vote sincerely does matter. Every vote does. Overwhelming data shows just how many elections have been decided by a mere handful of voters. In 1991, a House seat in Virginia was determined by one single vote. In 2002, a GOP House primary in the state of Washington was decided by just one vote. George W. Bush infamously won the deciding state of Florida in the 2000 presidential election by roughly 500 votes. And, of course, in 2016, Donald Trump secured the presidency by winning just enough votes to secure the Electoral College. Roughly 43% of eligible voters did not turnout to the polls in 2016. And for that, we are paying dearly.

The presidential election next month is one of momentous importance because we are quite literally voting for our lives. And again, if you are Black, I mean this tenfold. A considerable amount of voter apathy comes from the erroneous and, quite frankly, dangerous idea that a Biden Presidency would be just as bad as a Trump Presidency. And while it is absolutely correct that Biden’s political record is not squeaky clean when it comes to his previous political platforms that affected the Black community (i.e. The 1994 Crime Bill and his former anti-busing stance), it is paramount to affirm that re-electing Trump for a second term (either actively by voting for him or passively by choosing not to vote) would be far more damning to Black America than electing Biden. Neither candidate provides the prospect for a perfect presidency, but one candidate refuses to denounce white supremacy, which freely and directly puts Black America under siege. If the leader of the free world cannot merely condemn the malignant threat and oldest form of racism that has plagued our nation, the floodgates of unbridled bigotry will be jolted open and a second-term presidency would terrorize our worlds in unfathomable ways. As Sonya Renee Taylor so poignantly directs, “vote like you are picking the enemy you want to fight.” Be clear that we would all be better off fighting the enemy whose political record is considerably tainted, than the enemy who wholly rejects the validity of our existence.

No, voting is not the ultimate answer to all of the injustices that plague the Black community. Only a complete and total societal reckoning can even begin to tackle that monumental feat. But voting is an essential step that can be utilized to affect necessary and transformative change. Your vote has tremendous power; you simply must use it forcefully and strategically. But we mustn’t stop our work after we’ve cast our votes at the polls. My mother and grandmother were correct that voting is paramount, but they were wrong about it being the be-all and end-all. We must vote in November, and continue our civic engagement in other proactive ways. We must vote in November, and continue to protest—since the protests that ensued after George Floyd’s death, Minneapolis, D.C., Chicago, and Denver have banned the use of chokeholds and many city governments have removed public sightings of Confederate monuments. We must vote in November, and hold our representatives accountable—in 2006 an immigration reform bill that would increase fines and prison sentences for undocumented immigrants was not enacted because of a successful citizen uprising in the Latinx community. We must vote in November, and continue to act. Voting is merely a single action item, on the thousand-page to-do list of “how to fix America.” But it’s a critical step, nonetheless.

Michelle Davis is a NYC and Brooklyn-based comedian and writer. Michelle is the co-host of PASS THE AUX, a monthly variety show at Union Hall in Brooklyn that deep dives into a new diva every month. She is not very fun at parties, but she is very fun with waiters at the Cheesecake Factory.