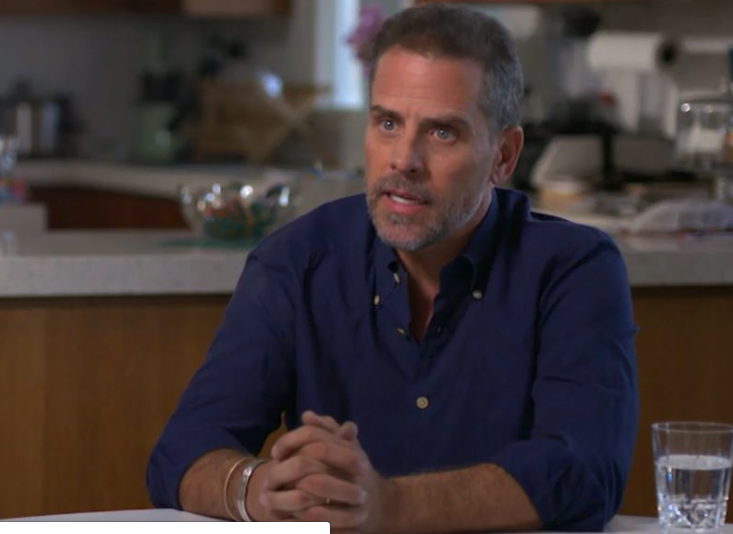 Hello, and welcome to hell American politics. In case you need a refresher: the president is an unstable moron who apparently feels like if he doesn’t tweet every hour he will die. On Friday, Trump decided to send out this very chill and very presidential tweet:

He was referring to Hunter Biden, son of Joe Biden, who has been at the center of the impeachment extravaganza after Trump asked Ukrainian officials to investigate him and his foreign business dealings. Lucky for Donald, Hunter Biden sat down with reporter Amy Robach to show that he is very much around and has nothing to hide. When Robach mentioned to Biden that Trump has suggested that he is “in hiding,” Biden said, “Hiding in plain sight, then.” Oookay, someone’s got jokes!!!

Hunter Biden took a job on the board of a Ukrainian natural gas company called Burisma while his father (Joe Biden) was Vice President. When asked by Robach if he ever discussed his business dealings at the company with his father, Hunter Biden gave a hard “no,” besides when his dad told him, “I hope you know what you’re doing.” What a classic dad thing to say.

Biden went on to say that there has been misinformation going around saying that he was not qualified for the job at Burisma. In the interview, he lists off his qualifications, but when asked if he would have gotten the job if his last name wasn’t Biden, he says, “I don’t know. Probably not. I don’t think that there’s a lot of things that would have happened in my life if my last name wasn’t Biden.” A white man outright addressing how his privilege has served him?!?!

Biden repeatedly said that he did not do anything ethically wrong, but he did admit to making some poor judgments — but none of them illegal or unethical.

“You know what, I’m a human, did I make a mistake? Maybe in the grand scheme of things, yeah. But did I make a mistake based upon some ethical lapse? Absolutely not,” he said, adding that the mistake he made was doing something that, “gave a hook to some very unethical people to act in illegal ways to try to do some harm to my father.” He elaborated on this with some sh*t-talking and name-dropping (we love to see it) by saying, “I don’t regret being on the board, what I regret is not taking into account that there would be a Rudy Giuliani and a president of the United States that would be listening to this ridiculous conspiracy idea.”

Biden also denied the allegation that Trump and his allies have made about a trip Hunter Biden made to China, which he traveled on Air Force Two with his father and daughter. Hunter Biden says he made the trip to accompany his teenage daughter, and that he met with some business associates in a social manner while there.

Trump has accused Hunter Biden of receiving $1.5 billion dollars from this trip. When asked if this is true, Biden said absolutely not, and that if it were, he would “not be sitting down for this interview right now.” This guy has the kind of material that could make him a successful mediocre male comedian in NYC (Hunter Biden, if you’re reading this, please do not take this to heart)!!!

He also offered up this nice quote when talking about the Trump Administration’s love for making sh*t up: ” They feel like they have the license to go out and say whatever they want. It feels to me like living in some kind of ‘Alice in Wonderland.'” Not a bad metaphor, but at least Alice in Wonderland was fun. This whole having an immoral bag of skin for a president feels less fun.

The best part of the interview was when Biden fired some shots at Donald Trump Jr, particularly when he referred to him as “Donald Prince Humperdinck,” when essentially saying he doesn’t give him or any Trump family member any thought because they don’t matter to him.

In short, Hunter Biden is your typical white guy with a successful daddy who probs got ahead in life based on that advantage. But there has been no evidence that shows he did anything illegal or unethical in his business dealing with Ukraine and China. Let’s hope this interview has reassured Trump’s concern that Hunter Biden is MIA and will make him stop tweeting (it won’t).