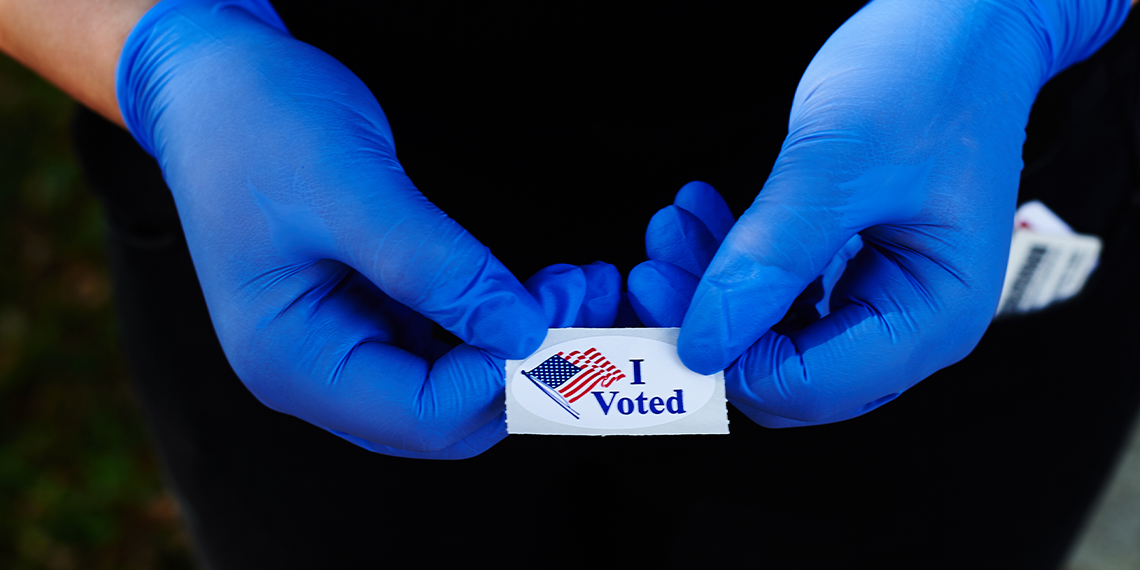 How To Vote Without Spreading Infectious Diseases

Casual reminder that despite the global pandemic, there is still a primary election going on. Last week, elections were held in Arizona, Florida, and Illinois despite warnings from the CDC against gatherings of 50 or more. A number of other states have opted to postpone their elections, like so many #coronabrides, while our government attempts to get a handle on the crisis.

With another big round of primaries at the end of April, and some coronavirus projections saying social distancing could impact our way of life for 18 months, what are those of us who both want to vote and stop the spread infectious disease to do? Here are some remote voting options that states have instituted, or could institute, to better allow us to vote during a pandemic.

Early voting is kind of exactly what it sounds like. It’s a process that allows voters to start casting ballots before Election Day, allowing voters more time to get to the polls when it’s convenient for them and helping to cut down on long lines and crowding at polling places in general. Thirty eight states have early voting laws on the books, so chances are this rule could apply to you. Rules can vary from state to state, so be sure to check your state’s rules before voting. For example, New York’s early voting law allows voting to begin 10 days before the election, but that number can go up to forty-five.

Vote By Mail and All Mail Voting

Vote by mail, aka the thing we should all have, is a term for when voting is conducted – say it with me – by mail. Groundbreaking. States with a vote by mail option allow voters to receive a ballot and mail back their vote without ever having to step foot in a polling place. In California, for example, primary voters could request a ballot for any reason from their county elections official either electronically or in print between 29 and 7 days before the election. They were then mailed a ballot with instructions on how to fill it out and a special envelope, which they were allowed to either return via mail or at any polling place on election day.

In those states that have instituted all-mail voting, ballots are automatically mailed to every eligible voter. They return them via mail and voilá, voting has occurred. Can you even imagine something that simple?

Given the global pandemic keeping us all in our homes, voting by mail has gotten a bit of a glow-up lately. Last week, Federal Election Commissioner Ellen Weintraub said that coronavirus pandemic has demonstrated how “necessary and urgent” voting by mail has become.

“As Congress and the White House race to save American lives and preserve America’s economy, they must also act swiftly to protect America’s democracy,” she said. “No one should have to risk their life — or the lives of their loved ones — to cast their vote.”

Voting rights advocates and election experts across the country are calling on states to consider implementing an all-mail voting system by the November election. Given that health experts say the coronavirus could impact our way of life for up to 18 months, seems like we should get TF on that.

Absentee voting is technically a thing in all 50 states, but some states require you to provide an “excuse” in order to qualify. In 28 states and D.C., however, you’re allowed to request a ballot and vote absentee with no excuse. If you’re in one of those states, check out your state’s absentee ballot rules (Warning: they can get tricky) and request a ballot which you can then send in by mail.

How Do We Support These Options?

Pressure Washington to act! Since the pandemic outbreak, a new bill has been introduced by Senators Ron Wyden of Oregon and Amy Klobuchar (#TBT) of Minnesota that would require all mail-in or drop-off paper ballots if at least 25% of the states in the U.S. have declared a state of emergency. Sounds reasonable. It would also require that requests for ballots be made electronically. Call your representatives in Congress (that number again is 202-224-3121) and let them know you support expanding voting access in all situations, but especially in a global f*cking pandemic.

To hear more on this topic, check out the end of this episode of the Betches Sup Podcast, where Sup content manager Amanda Duberman interviews the ACLU’s Molly McGrath about voting access in the age of corona.