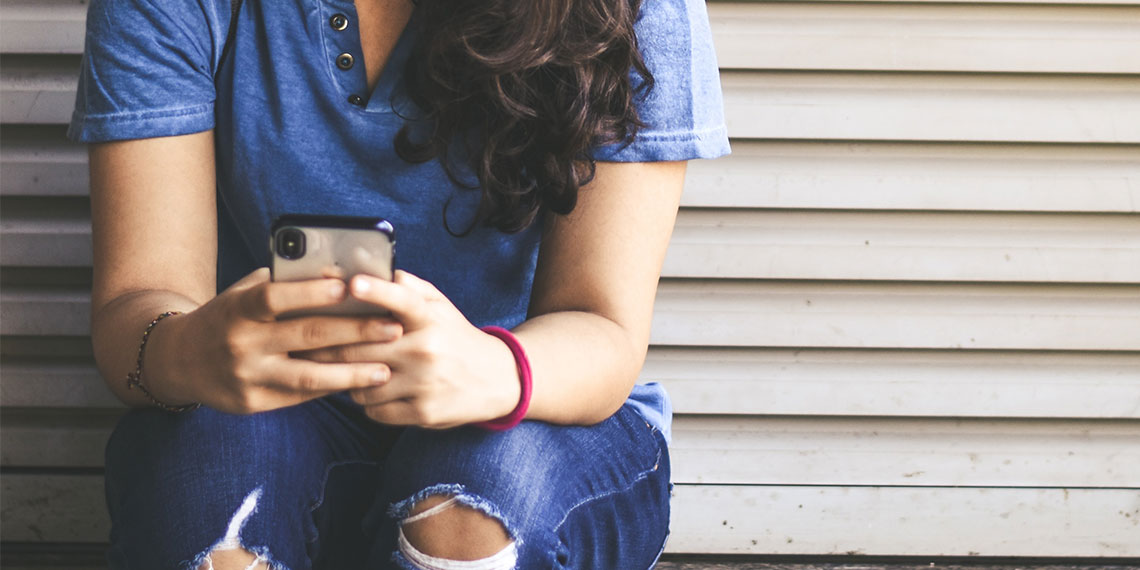 How To Tell If Your S.O. Is Being Shady With Their Phone

Welcome to dating in the digital age! It sucks, doesn’t it? Ugh, it sucks so much. There’s DMing, swiping, ghosting, and a carousel of more ridiculous terms. Raise your hand if you wish we could go back to a time before phones and social media, when you never second-guessed your partner’s phone dinging late at night and didn’t start fights about your S.O. liking someone else’s pictures on Instagram. Technology has f*cked up everything created a whole new realm of controversial dating dilemmas, like going through your partner’s phone. Personally, I’ve never gone through a partner’s phone, because one, I like to dodge red flags like I’m in The Matrix, and two, because I like to think that I’m not a total paranoid psycho. (Just like, half of one.) Regardless of what I could have potentially found or not found on their phone, there’s really no coming back from snooping. So you have to ask yourself, what’s more important, the trust or the receipts? When contemplating if all is fair in love and technology, you have to seriously consider what is “legal” in love. To help us navigate relationships in the digital age, I consulted with dating expert Judge Lauren Lake, of Lauren Lake’s Paternity Court, to answer all of my controversial dating and technology questions. So go ahead, drop his phone right now and let’s figure this sh*t out.

To Snoop Or Not To Snoop?

When it comes to going through some else’s personal property in a relationship, what should you do? According to Judge Lauren Lake, “It is never okay to go through your partner’s phone. Once you feel the need to check your partner’s phone, it’s time to have a serious conversation to discuss where the disconnect lies.” Going off of Lake’s advice, you should never violate someone else’s privacy—just think how insanely pissed you’d be if they went through your phone. I have never had a passcode on my phone, mainly because I don’t believe drunk me will remember the code, but if I caught a boyfriend snooping through my easily accessible phone, I would throw a fit so big that I would be instantly cast as a Real Housewife.

But is there ever an acceptable reason to go through your partner’s phone? Lake says, “Never! I highly recommend that you resist the urge to go through your significant other’s phone. It’s a lose/lose situation and most likely your partner will feel violated whether they are hiding something in their phone or not.” She adds, “If they are hiding something, it will come out eventually.” Think of it this way: if someone’s acting shady, they’re not going to be able to keep it a secret forever. Going through their phone is only going to make you look bad and overshadow the fact that they were in the wrong.

Then again, it’s not always so easy to resist the urge to snoop. Imagine this: Your boyfriend’s phone just dinged, you glance at it innocently, and you see a text from their ex-girlfriend—what do you do? A) Go through their texts? B) Pretend like you didn’t see it? C) Talk to them about it? If you guessed C, then congratulations, you contain the basic communication skills necessary for a stable and healthy relationship! Lake advises, “Communication is key when you don’t feel comfortable with something like this and you want an immediate end. If your partner has nothing to hide, they will share the message and the reason for the text with you. If they can’t share the message, then you have your answer.” You may not be able to read the texts, but you can for damn sure read between the lines.

Judge Lake rules that it is totally legal in love to have private passwords. So no need to completely lose it if you start dating someone who has a passcode on their phone. Red flags are generally pretty obvious, so if something feels suspect, then trust your gut. For instance, if they’re driving and you want to open their Spotify to play some Bieber (solid choice) and you ask what their code is, and they totally freak the f*ck out and refuse to tell you… that should raise a red flag or two. To be clear, a passcode doesn’t necessarily mean that they’re hiding evidence of raunchy DMs and suspiciously long FaceTime calls. However, you should be alarmed if they’re treating those six digits like they’re the goddamn nuclear codes, or if they suddenly start using a passcode after two years of dating. In that case, you may want to reevaluate your so-called mutual trust.

If it comes down to you debating whether or not you should check their texts, then they’re either doing some sketchy sh*t or you don’t trust them—either way it’s not an ideal situation. The irresistible urge to snoop can indicate a complete breakdown of trust in the relationship, which obviously isn’t good for either one of you. So how can you tell the difference between being paranoid and having a valid cause for concern? Lake informs us that, “Paranoia comes from hurt and pain from previous relationships. Valid concern comes from real situations and issues that have manifested in your relationship that need to be addressed.” Really stressing the low-key annoying fact that communication is key in all scenarios, because it’s like they say: paranoia will destroy ya.

Are They Being Shady Or Are You Being Paranoid?

Technology has become completely intertwined with relationships, and with that comes a whole new set of relationship red flags and dealbreakers. Lake outlines these new guidelines by stating that, “Respect is key in a relationship as there should be an understanding of what’s appropriate and what’s not. If a person crosses those boundaries once, it’s a red flag. If they consistently cross those boundaries, that should be a deal breaker.” Now that you are familiar with the rules, let’s play!

Hypothetical Fight #1: They won’t post photos of the two of you on Instagram. Red flag or deal breaker?

Judge Lake’s Ruling: Deal breaker. “Some people like to keep their personal/dating lives private. If you don’t like it, address it with your partner. It could mean that they aren’t truly committed or mean they just don’t want to showcase that part of their life. If that makes you feel insecure, you have to re-evaluate whether this is the person for you.”

Judge Lake’s Ruling: Red Flag. “If it’s from a person they know or an ex, that’s a red flag. If it’s from a random person and there is no other connection between them, it’s not that big of a deal. If it makes you that uncomfortable, discuss it.”

Hypothetical Fight #3: They won’t share their passcode with you.

Judge Lake’s Ruling: Deal Breaker. “You are not entitled to control someone else’s property, but if you’re in a committed relationship and your S.O. won’t share their password with you, you already know what the deal is.”

Hypothetical Fight #4: They’ve admitted going through a partner’s phone in past relationships.

Judge Lake’s Ruling: Deal Breaker. “If they did it once, they will probably do it again.”

Bottom line: If you feel the need to snoop through your partner’s phone, regardless if you find anything incriminating or not, your relationship is probably doomed, and if not doomed, it’s at least heading down the wrong direction on a one-way street. Solid relationships with established trust don’t have room for paranoia; if you and your partner treat each other with respect and trust each other completely then there is no need to spy on each other.