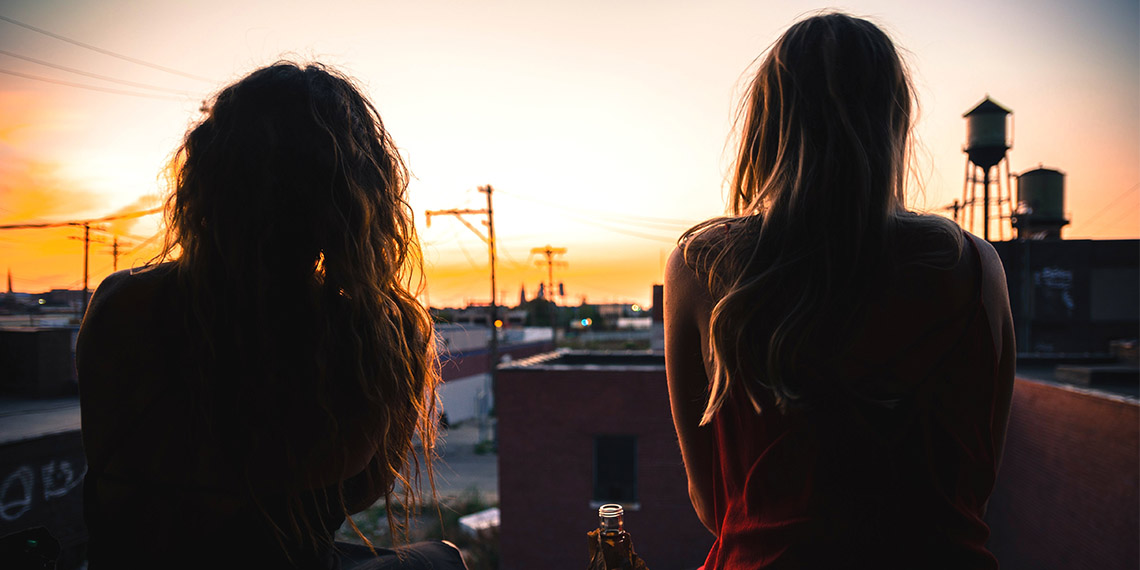 How To Not Hate Your Roommate During Quarantine

Let’s be real: we’re at the point in quarantine when all of those “what day is it?” memes are starting to feel a little too on the nose. Tensions are running high, and the only people you’re allowed to see are most likely the ones responsible for pissing you off. Even if you previously loved your roommate(s), you might be starting to find yourself annoyed at the mere sound of their door opening. (And if you already hated your roommates, well, let’s just hope they’re still alive.)

If this resonates, take a deep breath: your relationship with your roommate doesn’t have to suffer just because you’re now seeing one another more frequently than twins in utero. Personally, I’m one of the most easily annoyed human beings on the planet and I’ve somehow… gotten closer with my roommates? Whether it’s the collective trauma, or our pathetically earnest attitudes to keep the peace, or the sacred gift that is wine delivery, we’re finding ways to make these close quarters work. Here are some suggestions for you to do the same:

I may have not taken a math class since my freshman year of college, but I’m logical enough to know that the more you see your roommate, the more likely they are to start pissing you off. Maybe you’re feeling claustrophobic because you both keep trying to make dinner at the exact same time. Or maybe they won’t stop binging Five Wives when all you want to do is marathon Sex and the City. In any case, it’s frustrating to feel like your space isn’t truly yours.

Try to combat this by adhering to separate schedules. If your roommate is in the main area, maybe take some solo time in your room for FaceTime dates, catching up on a good book, or testing out a DIY face mask you used to never have time for. If you show that you’re respecting their space (and they’re a decent person), they’ll hopefully do the same for you.

Distract Yourselves With A Shared Project

Whether it’s finally organizing the hallway closet, a Pinterest craft, or getting TikTok famous, connecting over a shared project eliminates boredom, and thus some of the tension that may arise when quarantining with another. Plus, a shared project gives you and your roommate something to bond over. Months from now, you can look back at that gallery wall and think, “Aww, remember how we survived this incredibly anxiety-inducing time together?”

Give Yourself Some Date Nights

One of the first things a couples therapist will suggest to struggling partners is to find ways to “rekindle the magic.” Try to do the same thing with your roommate, but without making it weird. (Unless you both want that, in which case, godspeed.)

Find something you share in common and make an activity out of it. This could include having a DIY cocktail night, ordering a huge spread of Chinese takeout, or busting out a puzzle. Quarantine can be brutally depressing for everyone, but by finding ways to make it more fun, you’ll squash some of those bad vibes and create adorable memories.

Build An Apartment Registry For Stuff You Want To Buy

Nothing brings people together like adding things to your online cart and never actually buying them. At the very least, it will get you both onto your computers and out of each other’s faces. Check out some of the killer online sales right now, or scan Etsy to support small businesses. If you don’t have similar tastes, stray away from things like art and throw pillows and look more at utilitarian pieces like vacuums, vegetable spiralizers, and Vitamixes.

Have An Honest (But Chill) Conversation About Cleaning And Social Distancing

Cleaning is inarguably more important during a pandemic, which can be a real problem if your roommate is a Joey and you’re a Monica. To protect yourself from potential resentment, sit down and discuss what you’re going to do to be safe and responsible over the next few months. Also consider using this time to discuss social distancing etiquette—it’s best to be super clear so your roommate isn’t bringing a rando Brad over for the umpteenth time.

If your roommate isn’t taking hygiene or social distancing seriously, lead with empathy and facts: I know you that really wanna hook up with right now, but I don’t feel safe. If they’re still breaking the rules, call the cops. (JK, but maybe consider getting a new roommate after all of this is over.)

Just watched You’ve Got Mail. Such a cute movie OMG. Who knew Dave Chapelle was in it!!

We’re hoping to be let out of this metaphorical prison soon, but in the mean time we might as well find something to celebrate. Luckily, there are a ton of random holidays in May and June that make it acceptable to throw a “roomies only” party. Pick one and make a big to-do about celebrating it—holidays include National Chocolate Chip Day (May 15), National Wine Day ( May 25), Hug Your Cat Day (June 4), Best Friends Day (June 8), International Sushi Day (June 18), and National Selfie Day (June 21). Interpret as you will.

Vent To An Unrelated Friend Or Family Member

Despite all of your efforts, there very well might be a time when you just cannot with your roommate. If that’s the case, lock yourself in your room, make sure the walls are soundproof enough (and if not, turn on some music) and call a family member or unbiased friend to complain. If you’re still worried about your roommate hearing, wait until they’re on a walk, or write it out. Getting your feelings out privately will release some of the tension without having to jeopardize your relationship.

Find Something (Or Someone) You Both Hate And Trash Talk Together

If my corporate career taught me anything, it’s that one of the best ways to bond with someone is by trash talking someone else. What’s something everyone can dislike? Donald Trump?  Influencers who aren’t following social distancing rules? The supporting cast of Gossip Girl? Whatever it is, pour a glass of wine and cozy up to complain. Not only will you get out that negativity, but you’ll also bond over your mutual hatred! So cute.

According to my therapist, our brains are in a constant state of Fight or Flight mode right now—meaning it’s going to be a lot easier for your buttons to be pushed. If you feel yourself starting to spiral into meltdown mode, give yourself some privacy. Go into your bedroom and rage journal like you’re 13 and your younger sister just drew a moustache on your American Girl Doll. Do a hair mask, watch TV on your laptop, take a shower, just do something to save yourself from starting World War III. While it may not be as satisfying, it will save your relationship, and thus your sanity, in the long run.

Remember That This Time Sucks, And Empathize

Quarantine feels terrible for everyone, and it’s not like you and your roommate can slide into each other’s brains and automatically know one another’s feelings. Maybe your roommate is being cranky or lazy because they’re stressed with work, coping with a layoff, or homesick. Their being kind of rude probably has nothing to do with you. It might be hard, but in the moments when you’re feeling annoyed, consider taking a step back and looking at your roommate with affection rather than aggression.

In other words, the world is kind of scary right now and we’re all feeling a little anxious. Be the voice to soothe that anxiety, rather than contribute to it. Not only will this keep you from hating your roommate, but it might even (gasp) bring you closer together? Who knew.

Amanda Kohr is a Los Angeles-based writer who spends too much money on natural wine and too much time asking her boyfriend if he’s mad at her. When she’s not googling pictures of baby goats, you can find her on Instagram, Twitter, or musing about validation via her newsletter, “Do You Love Me?”