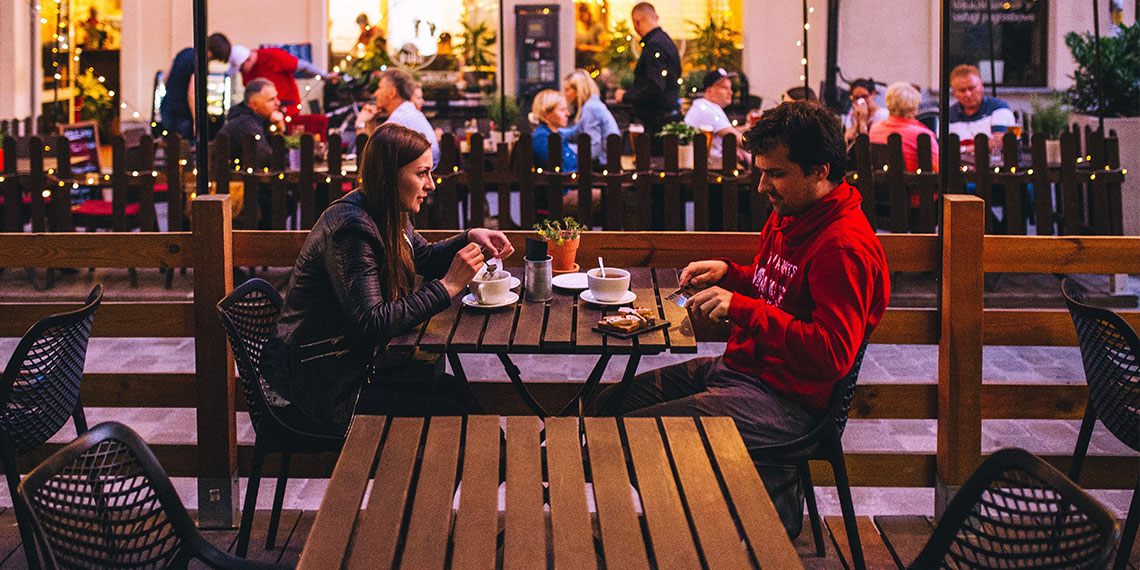 How To Finesse A Second Date Without Coming Across Desperate

Have you ever been on a first date that was also a last date? I know you have, don’t even try denying it. It is my personal opinion that all first dates, no matter who they are with, are horrible. Because you’ve never met, there is so much to talk about, yet you’ve been on the subject of his family’s dog for a full 20 minutes. (And don’t even get me started on the whole “what do you do for work?” topic.) But every once in a while, the stars align and you end up on a first date with someone who doesn’t make you want to rip your throat out. Now, if you’ve ever been on a truly amazing first date (before you share your cute first date stories in the comments, don’t), you know that you’re about to be stressed af about securing that second date.

Because I am normal human being (and a woman), I am a feminist in every way, but that doesn’t mean I will be the first to text after a good first date, and it sure as sh*t doesn’t mean I’m going to be the one suggesting the second date. Why, you ask? Because dating—at least in the beginning—is a game, and if you want to win, you need to figure out who you’re dealing with and play at their level. And winning, my loves, is what women do best. For those of you rolling your eyes because you “don’t play games,” everybody plays games. I’m not talking about taking three hours to respond to a text or pretending you have plans to make yourself seem like a ~hot commodity.~ No, I’m talking about human psychology: if you are fully yourself with all of your “I want a relationship” intentions too early, you’re putting a lot of pressure on the dude to either fold or raise right then and there.

One more poker reference, then I’ll speak English. In life, putting it all out there is considered a bad thing, because doing so implies you have no more tricks up your sleeve, but in poker, laying all your cards on the table means you won the game. Dating is like poker: in order to get to a place where you show your hand, you have to play the game. If you want to score a second date, play to win.

How Much To Text Between Dates

Let’s get the easy stuff out of the way first: This is a personal preference that doesn’t have a huge bearing on whether or not there will be a second date. You can usually tell right off the bat if guy is a texter or not. If he isn’t, don’t go out of your way to text him, because you will likely spend the majority of your downtime imagining the ways in which he mysteriously died and therefore, is not texting you back. Don’t get me wrong (I am a texter), texting is great and can be a good way to knock the stupid topics out of the way so you can get to the good stuff on the date, but if one or both of you are the kind of people who don’t like to text all day, just don’t do it. Tbh, I love when the guy I’m into texts me a lot because it gives me a little sense of security that he’s into me. But some people don’t like it because, I guess, they have jobs where they can’t be on their phones making small talk all day. Texting is all good and fine, but take the temperature of your situation in person because anyone can say anything behind the comfort of a screen.

However, if he takes like, days to respond, it’s probably safe to assume he’s not into you. Even if they’re “bad texters,” millennials f*cking live on their phones, so are these assholes really out here trying to convince us that they didn’t see our text until four days after we sent it? Bye!

When To Go On The Second Date

This depends on schedules. If you’re into finance bros (condolences), your first date could be on a Tuesday and the second date could be three months later. Those dudes are never free, but don’t worry, they’ll tell you all about how busy they are while they elusively avoid picking a date to see you again. However, if you like people with non-soul-sucking jobs, any time within a week is acceptable.

How To Bring It Up

Honestly, acting like a second date hasn’t even crossed your mind is like the waiter putting warm bread on the table and no one reaching for it. In other words, it’s stupid. You both had a good time on the first date and are doing the whole back and forth of witty repartee, so why waste time skirting around setting a date for round two? If it seems like he needs a little nudge to get the courage to ask, guide the conversation there, but I wouldn’t be the one to straight-up say, “When are we hanging out again?” If you do that, it’s obviously fine, but just know that you’re basically taking on the role of date instigator for the rest of time. That’s a lot of work to give yourself early on.

But! That’s not to say you shouldn’t bring up the second date in some way. Women are nothing if not determined go-getters, so unless you and your date are texting about like, death, you can figure out a way to steer the conversation towards a second date. In my opinion, the easiest way to do that is to lightly reminisce about something you both like or talked about doing on the first date. If he’s not a complete f*cking idiot, he’ll pick up on what you’re doing and say something along the lines of, “Let’s do that. What are you up to Saturday?” To go back to my poker analogy, that is called winning the first hand.

When To Have Sex

This one is easy: whenever the f*ck you want. If you’re a woman circa the 1950s or Mike Pence circa now, I’d say to wait until marriage, but even then, probably just don’t do it because sex is dirty!! But honestly, it’s almost 2020 and we have bigger things to think about than f*cking before the fifth date. If you have sex with a guy on the first date and he decides he’s not into you because you’re a ~slut,~ then he’s a piece of sh*t and it’s good that your relationship ended before it even started. At the end of the day, if you have spent a few hours with someone and he thinks you’re cool, he’s not going to stop thinking that because you had sex with him. If anything, he’ll be pretty happy about it. I’ve never heard a guy whining to his friends about how disappointed he is because the really cool girl he just went on a date with put out. I mean, right?

Despite the Andie Anderson title of this story, there’s no way to micromanage your way into a second date. The only thing we can control is the sh*t we do and say, but no matter how charming, funny and/or smart you are on date #1, that doesn’t mean date #2 is a done deal. After all, science has already proven that men’s romantic preferences are confusing as f*ck, so don’t waste your time trying to be someone you think the guy you’re with may find more attractive than the person you actually are. At the end of the day, we can’t control how people we’re interested in respond to our vibe, so your best bet is to watch Clueless for tips! Just kidding. I hate to say it, but just be the most normal version of yourself and hope for the best.