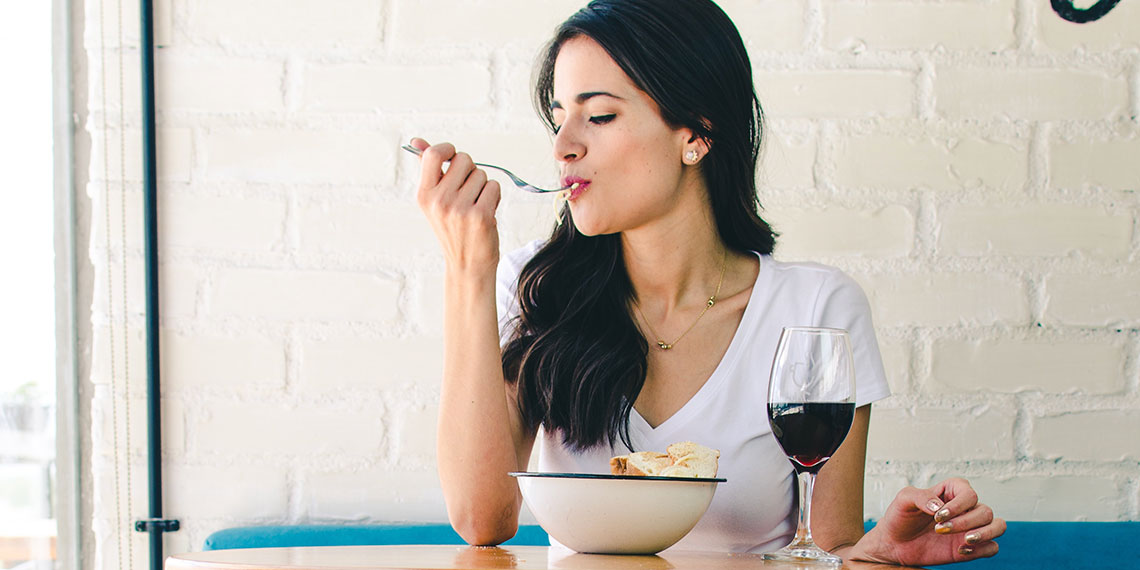 How To Eat To Beat Bloat, According To A Nutritionist

When the first days of summer made their long-awaited appearance, you probably had the best of intentions when it came to your diet: lots of fruits, veggies, lean protein, and low-calorie alcohols. But if three months of exactly the opposite (hello, burgers, fries, and beer) have left you a little, well, bloated, who can blame you?! You were just living your best life.

Still, it can be discouraging, and actually physically painful, to feel like your belly is always poking out and doubling in size after you eat certain meals. It probably makes you swear off all your favorite foods, at least temporarily, before a 2am craving hits and you start the cycle all over again. The good news, though, is that you probably don’t have to eat less to get rid of bloat. You may just have to make different food and drink choices, and not all of them are boring!

To make sure you get the absolute best anti-bloating advice—and are able to zip up your favorite pair of high-waisted jeans now that fall is upon us—we chatted with Monica Auslander Moreno, RD, and nutrition consultant for RSP Nutrition. Here’s what she had to say about beating bloat .

First, Make Sure You Don’t Have Any Major GI Issues

If you’re a victim of cruel and painful gas and bloating nearly every time you eat, the solution could be a matter of eating differently—but you could also have an underlying medical issue that needs addressing. “Visit a GI doctor to rule out a medical cause, like IBS, SIBO, or lactose intolerance that could potentially require medication or further workup, and firm up a diagnosis so you know how to leverage your food intake,” suggests Moreno.

If you do test positive for one of these conditions, your doctor may prescribe you medication and suggest you try certain diets to see how they make you feel. Dr. Moreno adds, “If you’re diagnosed with irritable bowel syndrome (IBS), for example, there’s a pretty concrete protocol we employ to help clients identify their own bloat triggers (it’s called the FODMAP diet) but it must be done under a dietitian’s supervision, because it’s incredibly meticulous and nuanced.”

While that (very long) list is a great place to start when it comes to identifying bloating culprits, everyone’s different. Just because your friend gets massive bloat after her daily jerusalem artichoke (as an important sidenote, we’re pretty sure jerusalem artichokes aren’t the problem for most people), doesn’t mean you will. The most important thing is that you pay close attention to what your triggers look like.

Before you freak out about having to give up caffeine and alcohol forever, it’s worth paying attention to times of day when you get more bloated—and how much of certain foods you have to eat before you get bloated—because it’s not always the actual food that’s the problem. “Everyone’s bloat triggers can be different, and some people notice they’re more likely to bloat if they even eat a certain food at a different time of day, or that they have a certain threshold with bloaty foods,” Moreno says. “Maybe you’re fine with half a cup of beans, for example, but not a whole cup.”

Load Up On Water

Now, let’s get to the good part: exactly what to eat and drink to beat bloat in the first place. When it comes to beverage choices, ditch the beer and diet soda and load up on water and herbal teas instead—specifically mint and ginger teas.

And as we say goodbye to summer, take advantage of the final days of melon season to get rid of the little pooch. “Go for snacks high in water content and low in bloat potential, like cantaloupe, papaya, and honeydew,” suggests Moreno. Another helpful anti-bloat agent? Yogurt. Or if you and dairy don’t exactly get along, a lactose-free yogurt. “Try a lactose-free kefir, which is yogurt-like drink packed with probiotics,” says Moreno.

Bloating, while unappealing and uncomfortable, happens to the best of us. So if this is you lately, don’t beat yourself up! Beating bloat could be as simple as eliminating a few foods and adding new ones in. You’ll be zipping up those high-waisted jeans again in no time.

Leigh Weingus is a New York-based freelance writer who writes about everything from health and wellness to entertainment and personal finance. Her work has appeared in Glamour, The Huffington Post, Well + Good, Mindbodygreen, Bustle, Elite Daily, and more.