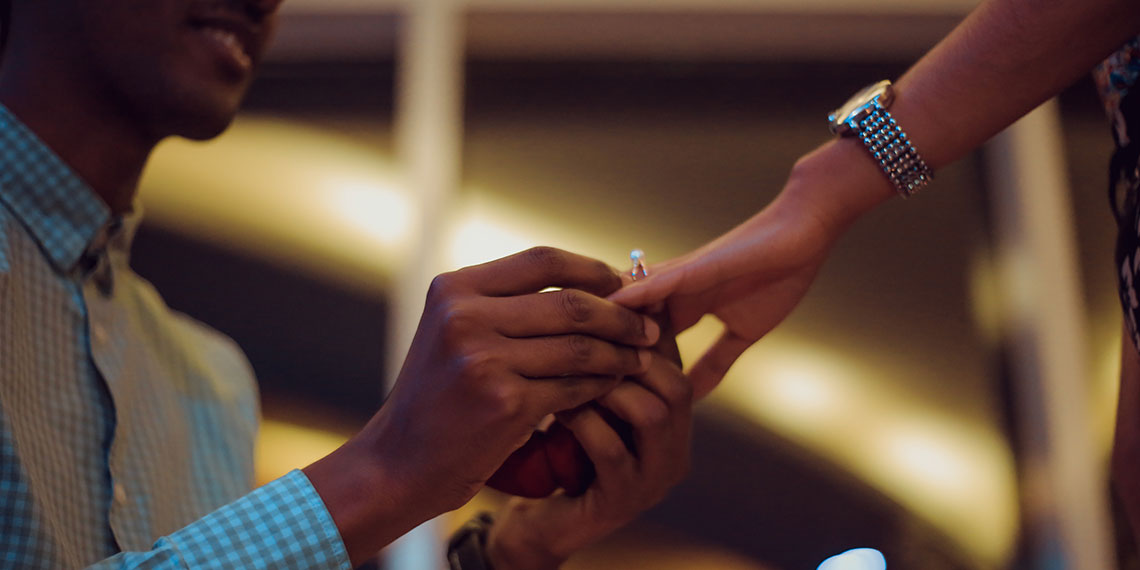 How Couples Are Getting Engaged In 2019, From The Ring To The Proposal

Did anyone else know that the months between November and February are engagement season? To me, it feels like every Sunday is engagement season, just based on the sheer amount of engagement posts I see on every social media channel. But just because I’ve been single since 2014 doesn’t mean I don’t love to kick back at the end of a long day and read up on my bridal content—especially The Knot, which just released its annual Jewelry & Engagement Study. As you can guess from the title of the study, it’s all about proposing and the jewelry that accompanies it. After reading and internalizing the study, I’ve deduced that proposals nowadays, especially for millennials, are all about personalization. People aren’t just opening a ring box to reveal a diamond as they kneel for a few seconds anymore. Now, it’s a whole big thing and, I mean, good? You’re asking someone to spend the rest of their life with you, so making it as personal and thoughtful as possible seems like a step in the right direction here.

One important thing I noticed from The Knot study is that most people getting engaged today are between the ages of 25 (cool cool cool cool, just kill me now) and 34. If you’re wondering what constitutes “most people,” it’s a whopping 67%. And if you’re wondering how old the proposers are, 38% of them are 25–29 and 27% are 30–34 years old. Just judging off the ages of the people I know who are getting engaged, this is not that surprising, but still slightly depressing for me, a very single person.

But before we get into the way most proposals are going down, let’s talk about the jewelry. According to the study, “More than 85% purchase new rings for the occasion, with 45% being custom designed.” So I guess holding on to your great-grandma’s family heirloom just isn’t what most people are doing these days. I can imagine it feels great to wear a ring that symbolizes you and your partner’s love for each other and to know that no one else has the same one. I remember that episode of Sex and the City when Charlotte proposed to herself (yikes) and then marched right on over to Tiffany to pick out her ring and claimed it was the most romantic experience of her life. I mean, I definitely wouldn’t say no to a Tiffany diamond, but in my and other millennials’ opinion, it’s more romantic to say yes to a ring that your S.O. designed with you in mind. Speaking of, more than 7 in 10 proposees say they were “somewhat” involved in picking out or buying their ring, which I support. I’d rather have more input in the piece of jewelry I will be wearing every day for the rest of my life than be 100% surprised. 78% of proposees dropped hints about what they wanted their ring to look like (hopefully, not subtle hints, because we know men can be, shall we say, oblivious?), and more than 70% said it’s important to see the ring in person before buying it.

When it comes to sourcing ideas for the perfect ring, the study found, “the majority (81%) of proposees turn to social media for engagement ring inspiration.” This makes sense, given that just about every other aspect of a wedding is sourced through social media. How did people get ideas for weddings before Pinterest?? Serious question.

And since the first thing I wanted to know was how much these bespoke diamonds are costing people, the average cost of an engagement ring is $5,900—though it’s dependent on region. If you’re in the Mid-Atlantic, for example, couples spend on average $7,500. And, just as every aspect of living is cheaper in the Southeast, you can expect to spend less on the ring too, with the average cost being $5,400. But perhaps most surprisingly is that 94% of people who proposed paid for the ring on their own, a statistic I will direct every Boomer family member to whenever they try to call millennials spoiled.

Speaking of Instagram, it may seem like all couples today do is post those selfies with “I said yes / Can’t wait to marry my best friend” captions, but a surprising amount of couples (51%) get engaged in private, and 40% get engaged in public, which is down from 45% last year. My Instagram would indicate otherwise, but ok, I’ll take it. To quote the study, “This year, those proposing spend an average of three months planning hyper-personalized, intimate moments to ask their significant other to marry them. While more than half (51%) of proposals occur in private, nearly one in five (18%) take place in locations significant to the couple’s past, like the couple’s favorite date spot or the location they first met.” Yes to all of this. Coming up with a way to ask someone you love to spend the rest of their valuable time on Earth with you should take a few months of planning! Even if it’s a low-key proposal, it’s worth putting some thought into.

To wrap it up with a classic summary of what have we learned: Instagram (shockingly) isn’t reality, at least when it comes to wedding proposals. The majority of proposals occur in private, take three months to plan, and involve a custom ring to seal the deal. Of course, if some of these elements are not your vibe, that’s completely okay. That doesn’t mean you’re doing it wrong or that your proposal or ring is less special than your friend’s; it just means that you have different tastes.