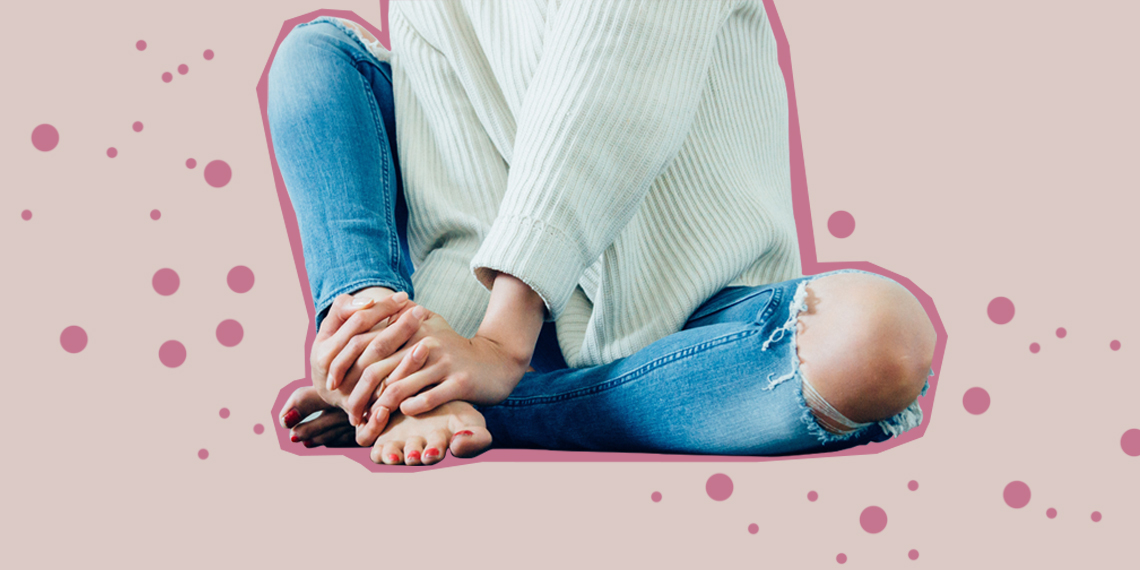 Here’s Why Having Herpes Is Kinda NBD

I’ve had my fair share of “herpes scares,” one of which led to me dragging my friends into a bar bathroom so they could watch me spread my ass cheeks and inspect my literal butthole for bumps. In my defense, that area is hard to get a good look at with a hand mirror. Anyway, these instances always ended the same: my friends assured me I was fine, I went and got tested at the local clinic, and then two weeks and five thousand panic attacks later, I was told that my results came back negative. Every time, my friends reminded me that “of course” I didn’t have herpes. I used condoms and herpes was a big, bad thing that didn’t just happen to anyone. But then one night, I sent an incredibly graphic photo of the inside of my labia to a friend asking her if she thought it was the herp, as you do, and she advised me to go get tested ASAP. She didn’t seem as convinced as usual, but she still assured me that I was “probably fine.” I went through the usual process, but it quickly became more and more clear that this time was different. Sure enough, when my results came back…they were positive. And here’s the thing: I had used condoms. As it turns out, herpes can just happen to anyone, and TBH it’s not even a big or bad deal. Sorry for being so chill but like, herpes is supes common and doesn’t even affect my health. I’ll tell you more about this by the end of the essay, but so as to not keep you completely on the edge of your seat, the answer is yes, I still f*ck.

Not to be a bitch, but more than one in six Americans has genital herpes. And oral herpes is even more common. More than 50% percent of Americans have oral herpes, although people seem to care less about this. Oral herpes is “just cold sores,” and yet genital herpes is “social suicide.” But the truth is, they are almost identical viruses. In fact, the virus I have is HSV-1, which is associated with oral herpes, but it activated on my gennies (I will be referring to my genitals as gennies to make this more fun). This means I probably got HSV-1 when someone with oral herpes went down on me.

HSV-2 is the virus that is referred to as genital herpes, and it’s not completely identical in its makeup to HSV-1, but it’s pretty damn close. Both viruses can show up on your body as sores, although both usually do not show up at all. Approximately 80% of people with genital herpes never notice any symptoms, either because they don’t get any, or because they are so mild they don’t realize what they are. This is part of why herpes is so common: most people who have it don’t realize they do, so they transmit unknowingly (so it’s actually much less likely to get herpes from someone like me, since I know I have it and can therefore take the necessary precautions to not spread it. Just as a like, PSA re: f*cking me).

On top of this, most standard STD tests don’t include a herpes test. If you’re thinking “WTF??,” you and I have something in common. The CDC doesn’t recommend testing people without symptoms for herpes, which doctors may tell you is because they assume the stigma of having herpes is greater than the health risks, so unless you need to treat symptoms, there’s really “no point” in testing you. This is what one of my sexual partner’s doctor told her after I suggested she go get tested when I received my diagnosis. Of course, letting people live in “ignorant bliss” by not testing the 80% of people with herpes who don’t have symptoms only leads to the virus being spread more. And furthermore, letting herpes go untreated can pose some serious health risks. It can spread to your brain and cause encephalitis, which is basically brain inflammation that can kill you. Additionally, if you’re pregnant, your baby is at high risk for encephalitis as well. So given these risks, we should be testing people for herpes. Why aren’t we? According to doctors, this is to stop people from dealing with the stigma. So let’s talk about the stigma, shall we?

The first thing I did when my gynecologist told me I have herpes was openly cry on the streets of New York. Then I got blackout drunk. You know, the usual two-step process to hearing bad news. But I soon learned that herpes isn’t that bad, at least physically, if it’s being treated. My doctor prescribed an antiviral pill, which I can take daily in order to prevent outbreaks and decrease the chances of transmission. With these meds, plus the use of condoms, my doctor told me there is about a 1% chance of me transmitting herpes to someone during sexual contact, so long as I’m not experiencing an outbreak (sores). I’m not great at math (I’m hot), but I can tell those chances are like, really low. My doctor assured me that even if I ever experience another outbreak, it will never be as bad as the first one. Outbreaks are less severe and less frequent over time. Plus, after doing some research online, I learned that the type of herpes I have—HSV-1 on my gennies—makes outbreaks even less likely. HSV-1 is a less aggressive virus than HSV-2, and it’s likely I’ll never have another outbreak again. I literally may never see another sore on my lil gennies, and it’s very unlikely that I’ll transmit the virus to anyone else. So what’s the big deal then? Stigma, that’s what.

i regret to inform u that this is legitimately a candid photo.

No joke, this photo was literally taken on the train home from my gyno post-herp news

I noticed the stigma right away. Wherever I went, it felt like I had a dirty secret, and not in the fun, flirty way. Whenever a guy at a bar smiled at me, all I could think about was how I had this thing that made me “unf*ckable.” I knew herpes was bad because we were all so afraid of getting it, and I’d heard plenty of jokes about how herpes is disgusting, for whores, ruins your life forever, etc. And as someone who has spent a lot of her life battling slut-shaming, it felt like my karmic punishment. I felt ashamed, gross, and unsexy. But the thing is, this was all stigma’s fault, not herpes’. It’s very common, and yet we talk about it as if it’s this awful disease that only the unlucky and the unwanted get stuck with. Call me radical, but I think that’s f*cking stupid.

So many of us are living with herpes, but we aren’t talking about it. A lot of us don’t want to because we’re embarrassed. I was at a Post Office recently where an employee made a herpes joke, and part of me wanted to yell, “Oh yeah, well I have herpes, so FUCK OFF,” but instead I just pretended to laugh along. That sh*t needs to change. We need to stop talking about herpes in a way that stigmatizes the many people who have it. And I completely understand that people may not want to contract herpes, but I can tell you having it has certainly not been the end of the world for me. I just wish we would talk about it more openly and realize how NBD it is, so the emotional impact of having herpes would be as minimal as the physical one. Doctors aren’t testing people without symptoms because they don’t want people to have to deal with the stigma, but pretending that herpes isn’t so common and not addressing how simple it is to deal with makes that stigma so much worse for those of us who have had symptoms.

And now, as promised, I will tell you how having herpes has affected my sex life. For the most part, it hasn’t slowed me down. I went on Tinder a bit after getting my results and tested out the waters. My approach was messaging matches and saying, “Hey what’s up, how you doing, I have herpes.” And to my surprise, most people still seemed interested in hitting up bone zone. Of course, some weren’t as comfortable with it. One guy thought that meant I had constant open sores on my vag that would never, ever go away, which I thought was LOL. Like, if that were the case, I would def not be trying to put anything inside me, let alone a d*ck. That would hurt so bad. Anyway, there have been people who, upon hearing I have herpes, are not willing to have sex with me. And that’s okay. I respect that. In fact, in a way, it’s made being intimate with someone a more communicative activity. And honestly, that’s pretty dope.

I’ve always been very attached to my sexuality, sometimes to a fault. I’m definitely still working on coming to terms with all of this, but I will say that my herpes diagnosis has helped me realize that while I love and cherish my sexuality, it does not define me. Just like having herpes does not define me. I was worried having herpes would mean I could no longer connect with my sexuality, but in many ways it has helped me become even more comfortable with it. I have herpes, and tbh, it’s kind of chic. All adventurous girls do, babe.