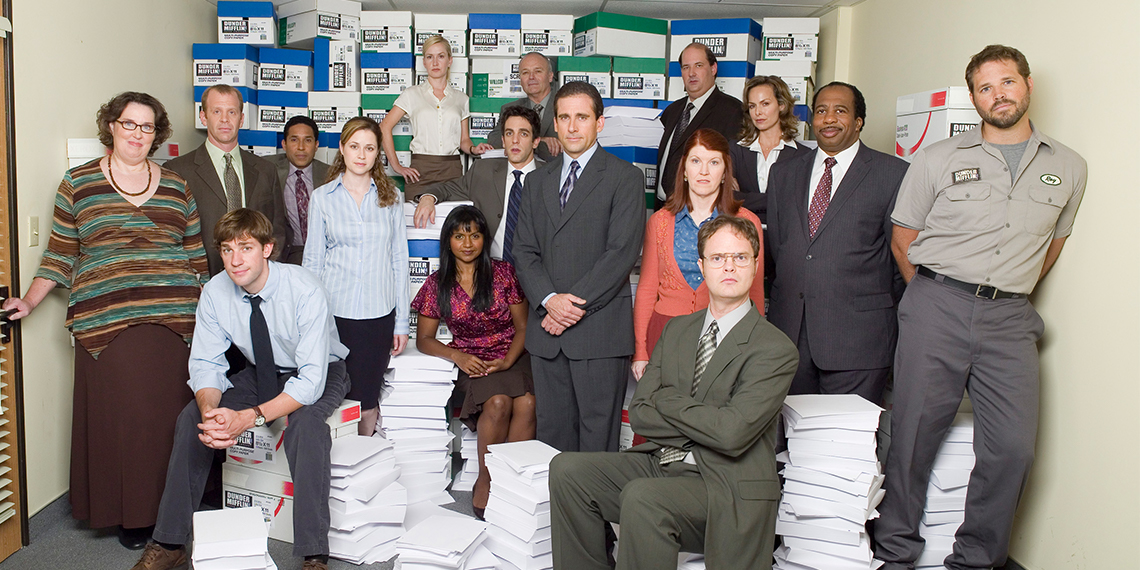 Quarantine is life now. Social distancing is bae. Pants and hair washing are a thing of the past. I can’t recall the sensation of a gentle touch from a rando I met at the bar lover. My boss keeps giving me deadlines, but time has lost all meaning and also I don’t *feel* like working.

And yet, one thing remains the same: I am watching The Office in its entirety…again. My therapist said it was important to keep my regular routine, so here we are. It would be impossible not to lose sight of it all if I didn’t fall asleep every night with a glass of wine on my chest and The Office playing on my laptop. We must keep some normalcy here, people.

Rewatching The Office for the, idk…15th? time has got me thinking…what would my best friends (the employees of Dunder Mifflin) be doing during their quarantine? Well, since I had the time, I went ahead and thought about it in great detail and wrote down my conclusions. Enjoy!

Tbh, Michael is pumped. He sees this as an elongated snow day, where can spend some quality time with his best friends, aka his employees. He’s making his rounds to everyone in the office’s house (except for Toby, obv), ready to play games like Twister, tag, or anything that involves touch. He’s greeting everyone with a high-five, followed immediately by a coughing fit that he does not cover his mouth for. He for sure has coronavirus.

Being the charming young sociopath he is, Jim is going to spend his time in quarantine the way he spends his time at the office: coming up with an elaborate prank to torture Dwight.

Jim will be messaging Dwight from a burner email address, telling him the CIA would like to recruit him as part of the coronavirus conspiracy task force meant to weed out the weak from the strong in society. He’ll invite Pam to help out, and they’ll count that as their date night for the month.

Dwight is in full apocalypse mode, living in his bunker underneath Schrute Farms that has been stocked with goods since 2001, waiting for this moment. He has been living off beets in various forms for the past week and a half.

Dwight is in hell, but feels like he’s in heaven.

Kevin is going on a lot of FaceTime dates, which is perhaps an even worse medium for him than IRL, which he’s surprised is possible. (Apparently, the ladies don’t take too kindly to “why say lot word when few word do trick?” as an opener.)

He went to Whole Foods and bought out the entire aisle of canned beans so he could make another giant batch of chili.

Stanley booked a super cheap one-way ticket to Florida at the first sign of trouble. He’s working remotely from the pool, and no one at Dunder Mifflin has any clue. He has no plans to return to Scranton.

Meredith is getting blackout drunk and walking around her house naked. Happy hour starts at 9am. In other words, nothing new. She’s started an OnlyFans, but only has one subscriber.

Angela is keeping busy by embroidering pillows of her late cat, Sprinkles, disinfecting every inch and crevice in her house, and making signs telling her neighbors, mail people, and delivery workers to stay 100 feet from her or she’s calling the cops. She is also calling the cops any time she sees someone walk by. The CDC has blocked her number.

She’s sticking to her routine of waking up at 4:45am, praying, ironing all of her clothes, putting on her chosen American Girl Doll outfit of the day, and making a spreadsheet of all the people who have annoyed her in the past 24 hours, which she plans to email to the governor.

The Nard Dog is practicing acapella, and since he has no one to do it with, he’s making compilation videos on TikTok of him harmonizing with himself. They’re unbearable.

Kelly honestly doesn’t see what the big deal is? She’s survived a tapeworm, so she’s pretty sure she can survive a “coronavirus.” Plus, whenever she gets sick she loses like, 3 pounds, so if anyone has the virus, she’s asking they come over and cough in her mouth.

In the meantime, she’s setting up fake dating profiles and trying to find Ryan on each app so she can catfish him.

Ryan watched The Inventor: Out For Blood In Silicon Valley one too many times and was inspired to start his own coronavirus testing company, which he claims is a contactless COVID-19 test that gets results in 15 seconds or less. In reality, he’s running a pyramid scheme. The FDA has his phone and computer tapped and will be shutting him down next week.

Toby is being proactive by putting together detailed newsletters with information on how to deal with this pandemic. He’s got tips, links, resources, and emotional support to offer. Nobody even opens the email.

Phyllis and Bob Vance of Vance Refrigeration have been social distancing for a while now, and their marriage has never been stronger. Bob was somehow able to get his business declared as essential, and Phyllis is selling her handmade oven mitts on Etsy. Phyllis has now coined the catchphrase “cover your mouth sweetie, you look like a trout” to encourage her fans to sneeze and cough into their elbows.

Gabe has actually been practicing social distancing for years, though not by choice. At least now he has a term for it.

Erin might perish because she has no lifeskills whatsoever.

Creed is the one who put forth the conspiracy theory that COVID-19 was made in a lab as an agent of biochemical warfare. He has been directly exposed no less than 17 times but has not so much as gotten a fever. He appears to be immune.