Hear Me Out: Shake Has A Point

By now, you may have seen Love Is Blind’s Abhishek Chatterjee, aka Shake, ask women in the pods if he could pick them up easily, or if they worked out, in a not-so-covert attempt to figure out their size. You may have also seen him tell anyone within earshot that he wasn’t attracted to his (now former) fiancée Deepti. And, if you’ve watched the reunion, then you’ve heard him try to defend his physical preferences and say that “love is blurry”. Let me try to explain what the biggest villain in reality dating TV since Justin from Dating Around was trying to say. Disclaimer: I do not agree with most of the things Shake said. I do think he has a point but doesn’t have the vocabulary, sensitivity or knowledge to explain what he was going through on the show. I had a positive edit on my show and still found a lot of mind fuckery I needed to work through three years after my edit was aired, so I can’t even imagine what he must be going through as a villain.

Like many other brown kids, I have parents that met on their wedding day, and just celebrated their 42nd wedding anniversary. I, on the other hand, am 40 years old, single, and completely burnt out from the search for “The One”. I understand how the premise of Netflix’s Love is Blind hopes to provide us with a solution to overcome the superficial hurdles to finding long-lasting love. In my own dating history, I often focused on physical attraction, and that caused me to ignore all the red flags. How my parents met is beginning to feel like a far superior solution to my own trials and errors (which I never thought I’d say). Take the physical out of the equation and get to know one another so that you fall in love without attraction blundering your decision making process? It makes sense on the surface.

But unfortunately, on Love is Blind, it’s not all that it seems, which is why most couples on the show don’t end up married.  Focusing on substance should lead you to connect on an authentic level—or as our beautiful Indian castmate Deepti’s mother said, “connect at the heart”—but Love is Blind doesn’t actually take an authentic approach to making the cast members fall in love. It actually produces the feeling.

Physical attraction is just one of the many reasons humans fall in love. Although Love is Blind says they take the superficial aspect out of the dating equation, which can sometimes lead us astray, it replaces it with another feeling that can be just as misleading. The hurdles of not being able to see someone at your will actually causes attraction. It even has a name: frustration attraction.

Adversity in being able to see someone heightens feelings of romance in the brain and releases dopamine and chemicals that feel like love. Ever feel totally OK about a break up but as soon as you reach out to an ex for something but don’t hear back, you feel distraught and start obsessing? That frustration attraction is why so many of us second-guess when we break up with someone.  If you ever got back with an ex, later regretted it, and didn’t understand why you did it in the first place, frustration attraction may have been the culprit. Absence makes the heart grow fonder, and the delayed gratification of frustration attraction replaces the initial physical attraction in Love is Blind, leaving the cast members in the same dilemma the show says it’s trying to prevent in the first place.

Love is Blind isn’t taking attraction out of the mix, it’s actually creating an environment for a different kind of attraction to make people fall in love quickly so that the struggles of modern love can be created for our viewing pleasure. The show mimics our reality, which is why it’s so engaging to watch in the first place. It’s still genius, but it’s not as innocent as it seems.

What Shake was trying to explain, but was too defensive to be able to articulate intelligently, is that as many of us know, everything is not what it seems on reality TV. The show isn’t actually simplifying the search for love at all, it actually reinforces the fact that finding long-lasting love is extremely difficult and complicated. Shake’s attraction faded, which can happen to any of us in that environment (or even in the real world), and whether we like to admit it or not, attraction matters.

The pressure on our partners has never been higher. We now want them to do it all: give us butterflies, solely focus on us, meet our needs while also being able to communicate their own feelings and desires on top of all the other traits we’re looking for. Extroversion vs. introversion, spending habits, drinking habits, fitness levels, family values, communication style, emotional depth, social media etiquette, career potential, vacation style—the list goes on and on. It’s not as simple as an emotional connection.

Love isn’t blind at all. Love is quite observant, complicated and multi-faceted. The show reminds us that love is far more nuanced than the simple act of falling in love, but that love isn’t just a choice; it’s also an unexplainable feeling that when lacking, creates the tension and doubt we see play out on screen. You can’t force love, even if you can force initial attraction. 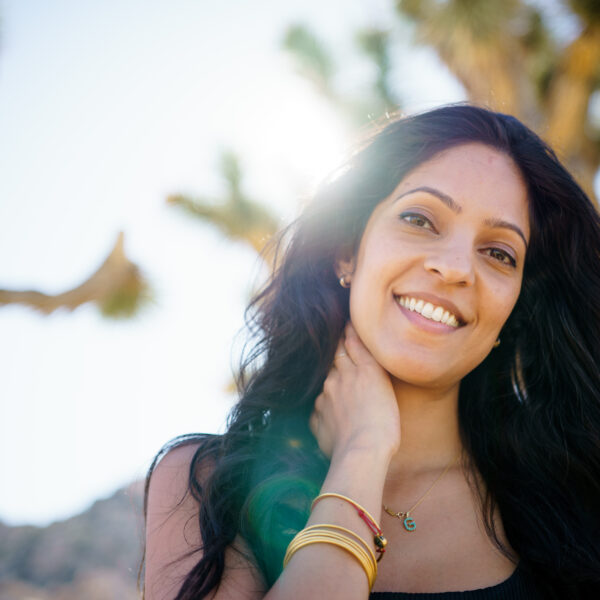 Gurki is the author of a currently developing non-fiction memoir that reveals the challenges of modern dating and how to overcome them. She was the star of Netflix’s first reality TV dating show Dating Around. When a clip from her episode went viral, it shed light on how many others were feeling the same challenges she had faced her entire love life. Since then, she has spent her time researching subjects such as attachment theory, Imago, narcissism and additional topics related to love and dating.