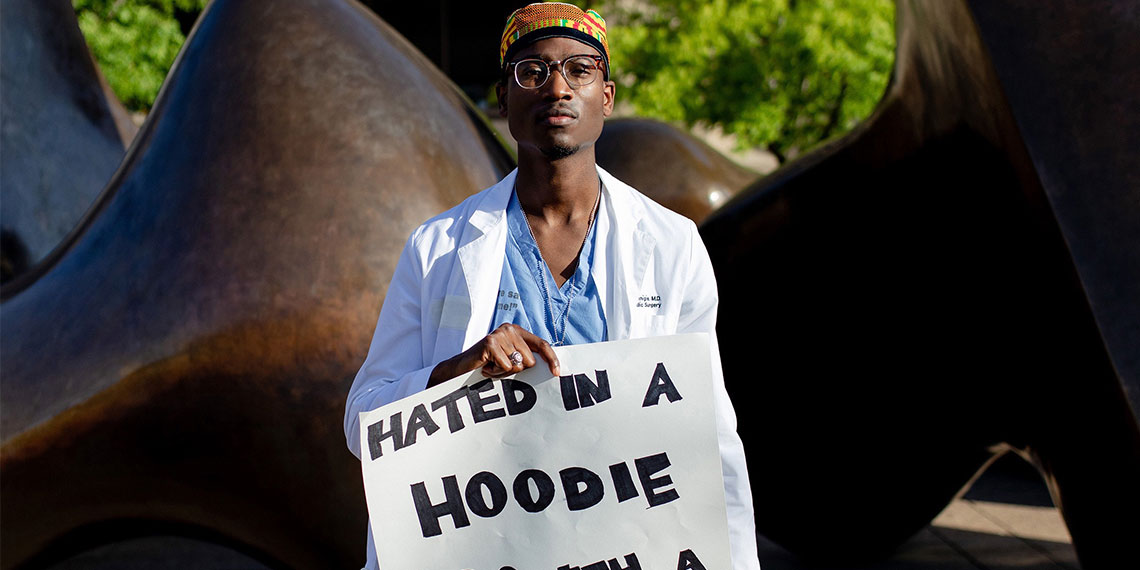 ‘Hated In A Hoodie, Hero With A Knife’: Interview With The Doctor Behind The Viral Post

“So I have to be honest with you,” I tell “Dr. Iggy”, the doctor behind the viral sensation “Hated In A Hoodie, Hero With A Knife,” “The first thought when I saw your post was, Trayvon Martin.”

“That’s right on the money,” he says, “That’s actually right on.”

The definition of the word hoodie was forever changed in 2012, when George Zimmerman killed Trayvon Martin, a 17-year-old African-American high school student who was visiting his relatives. Zimmerman told the 911 dispatcher before he shot an unarmed Martin that there was a “suspicious guy” in a “dark hoodie, a gray hoodie.” Instead of blaming the fatal outcome on Zimmerman’s racism, many blamed Martin’s attire, including Geraldo Rivera, who went on to say on Fox & Friends, “the hoodie is as much responsible for Trayvon Martin’s death as George Zimmerman was… you cannot rehabilitate the hoodie. Stop wearing it.” In response, many took to the streets to show solidarity, marching, donning hoodies and chanting, “We are all Trayvon Martin.”

Here we are, eight years later, and with the murders of Ahmaud Arbery and George Floyd, Dr. Iggy knew he could no longer remain silent. “When you are silent and things like that happen… your silence is compliance.” As the son of two Nigerian immigrants and the fifth of six children, he was raised with an awareness that he not only had to work hard as a first generation American, but also as a Black American. Although his high school was ethnically diverse, it was in college that he realized the challenges that were ahead. “I went to an advisor at my school, Texas A&M, and she didn’t weigh out the options. She didn’t even look at my grades … I don’t think she took me seriously and it felt like it was because of who she saw across the table.” At the time, he was considering a career in engineering. He had a slight change of heart when noticed some similarities between engineering and medicine, especially after fracturing his pinky toe his freshman year of college. “I missed a dunk contest and cried when using crutches… you can write that down, I’ll own up, ” he tells me, laughing.

Being a resident in Texas, he quickly learned that although he was being treated differently than his colleagues, he had to recognize that some peoples’ ignorance didn’t mean it was something personal. “I haven’t experienced or done everything so I don’t know everything,” he explains, “So when people are being ignorant it’s not necessarily against me… They just haven’t met someone like me before.” But after a series of situations such as people assuming he was “transport” or “a nurse” although his badge clearly says “doctor”, he knew he had to speak up. “Words carry weight… There is this quote in the Bible that goes, ‘the power of life and death are in the tongue’. A simple word can make someone depressed. Residents go through it but I can’t help but think that my experience was related to the color of skin.”

Inspired by his own experience and recent events, Dr. Iggy posted the image that led to the viral sensation, “Hated In A Hoodie, Hero With A Knife.” “I wanted to show people hey, I’m Black, I’m a doctor… There’s this misinterpretation that I’m being elitist with the image. What I am trying to say is when you see me in a durag and a hoodie there is a bias.. But when I wear scrubs, especially being Black, everyone’s mind goes elsewhere. I mean, I could have been Ahmaud Arbery. That could have been me running… every Black life is important.”

“I have a question for you and you don’t have to answer,” I say, “But I mean, every day around 8pm when COVID and quarantine started… We would all celebrate healthcare workers. Thanking them. Now, here we are, and Breonna Taylor worked as a first responder and she was killed in her own home. How do you feel about this hypocrisy?”

“Well, that’s why I did my post,” he says. “ was killed because she wasn’t at work… She was someone serving in the midst of all this and that happened to her. Whether she was wearing that uniform or not, we cannot let her story fall on the wayside.”

So what is Dr. Iggy’s message to those who may feel hopeless during this time of chaos? “When you’re positive with people, you breed positivity. When you’re lighthearted with people, it will make people lighthearted. There’s a quote in the Bible, one of the verses that helps me is, ‘how can two people walk together, unless they agree?’ Understanding is the bridge to getting along together and I always try to be the light in the darkest of times. Think we all need to do our part.”

Davina Adjani is a proud dog auntie, bad pun-creator and coffee addict. She will be the first to correct you if call her hometown, San Francisco, “San Fran” (SF is permissible, by the way). When she was 19, someone told her stop writing and find something she is good at, so she’s been writing ever since. Follow her on insta @davinaadjani