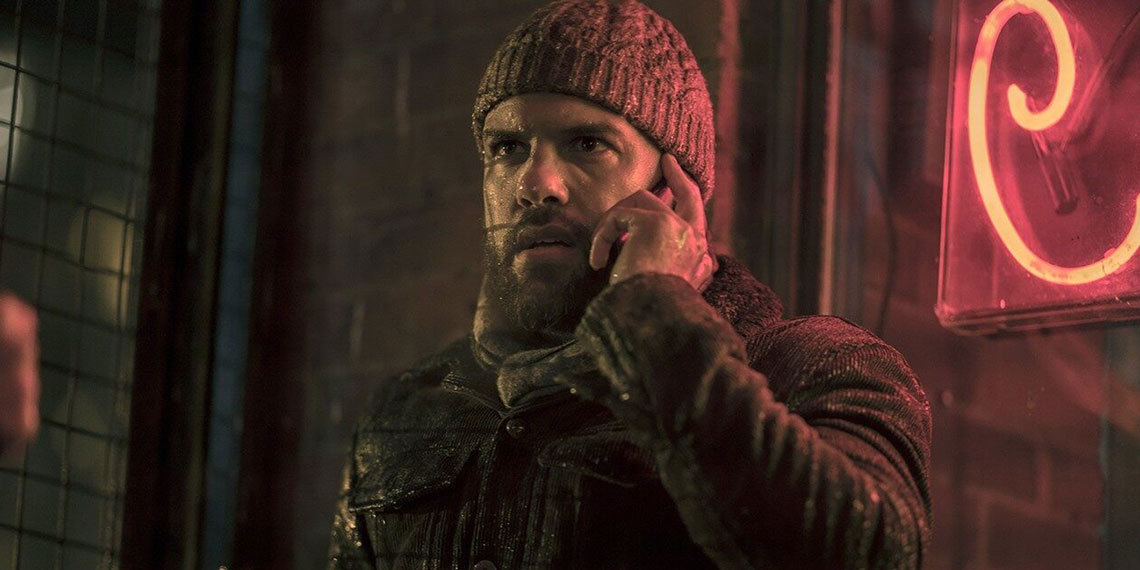 Who Is The Seth Cohen of Gilead? ‘The Handmaid’s Tale’ Recap

Back to Gilead! Let’s dive into the horrors Hulu has brought to us this week, shall we? We open on a Canadian protest, which I imagine is a very polite affair. Baby Nichole, a hardened member of antifa at this point, is on the front lines with Luke, her new pseudo-dad. Based on the epic fatness of her widdle cheeks, it seems like Nichole is thriving. Good for her.

You know who is not thriving? June, who is still sadly being forced to hang out with OfMatthew the Narc at the grocery store. June is tuning out OfMatthews’s narc-ery by dreaming about having sex with Luke at the clurb. This is also how I get through talking to annoying people.

June: Nobody dies from lack of sex.
Me: Speak for your damn self.

OfMatthew takes this opportunity to make a dig at June about Luke (could she tell June was just thinking about it? Does OfMatthew have a radar for horniness?), to which June responds “bite me.” Good for June.

It turns out that all of Gilead is looking for Luke, echoing my sentiments last recap that this thing with Baby Nichole is going to turn into an Elian Gonzalez situation, except instead of being saved by dolphins she was saved by Emily. (If you don’t know wtf I’m talking about www.google.com can help.)

Cut to: Fred and SJ at a meeting to talk sh*t about Luke. Gilead has apparently hacked Nichole’s medical records, which gives Serena what the kids call “all the feels.” Clearly being separated from her daughter has caused Serena significant mental distress, even though she knows her child is going to a better place. It’s almost as though separating children from their families is extremely traumatizing for everyone involved and should be reserved for the most extreme circumstances?! Food for thought.

Fred: Help me understand what it is that you want.
SJ: Well two weeks ago I had ten fingers and a baby and now I don’t have either so maybe let’s start there?

Cut to: June at the door, lurking and listening, aka doing what she does best. Turns out the Waterfords have stopped by for a casual chat. Who would have guessed in season one that these guys would form a mini friend group? They’re going to parties together, they’re hanging out after hours. I bet their group chat is littttt.

Turns out they’re not just there to shoot the sh*t, though. They want to arrange a meeting with Baby Nichole. Damn, Baby Nichole! She’s going to meetings! She’s out here protesting! She has a more active life than I do and I’m 29 years old. Wow.

SJ: Call your husband.
June: Oh yeah I’ll grab my cell phone and do that.

June tries to convince SJ this is a bad idea, to no avail. She’s like, “girl, listen, I know how this goes and it absolutely ends with you and her new mom talking about hypoallergenic dogs while you get arrested. Trust me.” Serena won’t hear it, so June decides the best course of action is to just go along with this extremely bad idea in hopes that SJ will owe her one later. Solid choice.

Cut to: June sitting at Commander Zaddy’s desk like a goddamn boss. She attempts to call Luke once but he ignores it, just as any respectable individual who receives a call from a blocked number would do. He picks up on the second attempt, probably assuming she’s one of those Chinese telemarking services that calls from a number that looks like yours.

Luke: Hey can you take me off the li—
June: Heyyyyy it’s me!
Luke:

Can you imagine picking up a call that you 100% thought was your student loan company and having it be your long-lost wife? TG he didn’t let it go to voicemail. That’s where phone calls go to die.

June: I need you to go to the Toronto airport to meet the Waterfords. Bring Nichole.
Luke and Everyone Else on the Planet: Uh that sounds like a really bad idea?

Ultimately Luke agrees because like, if your kidnapped wife calls you for the first time in years to ask you for one favor you kind of have to do it. You can’t really be like, “ahhh the next two weeks are kind of crazy for me but maybe check back in a month?” Also, like any respectable person, Luke refuses to meet with Fred, meaning SJ has to go alone. Cue Serena Joy’s Eat, Pray Love: Canada Edition! It takes place entirely in the Toronto airport and she doesn’t eat anything but there is a lot of praying.

Commander Zaddy tries to offer June a handkerchief for her tears when she’s done with the call, but she slaps his hand away like a boss. She’s a stone cold bitch who cries for no man. Also she has PTSD and has to shut down to deal with trauma. Relatable!

Next thing we know we’re with June and Crazy Madame Zaddy, who may not be so crazy after all. She tells June that Commander Z used to “curate cassette tapes for in college,” which is the least romantic way of saying your boyfriend made you mix CDs that I’ve ever heard.

This revelation comes as no surprise. Of course Commander Zaddy is one of those mix tape-making Seth Cohen motherf*ckers. Of course he is an indie boy. It’s always the f*cking indie boys. They start out all nice and cute and sensitive, and then the next thing you know they’re yelling about being friend-zoned and inventing the colonies. Typical sadboi behavior. Given my dating history, I can’t believe I didn’t spot it sooner.

Cut to: June hauling ass to the attic to find the mix tapes and see if they’re embarrassing. Surprisingly, they are not—though one of the tapes is called “A MIXTAPE MIASMA,” another typical indie boy move. TBH based on the first song alone this mix tape slaps. Pass Commander Zaddy the aux any day of the week.

Next, we see Serena getting ready for her big vacation to the Toronto airport. She is going to bring Nichole a giant hideous necklace to remember her by. Sure, Serena. Sure. Before SJ leaves, Rita gives her a grubby little package that SJ is supposed to pass on to Luke.

Okay, can I just pause and say, how the f*ck is this happening without any government intervention? Once again, the rules of Gilead are all over the place. Two episodes ago, June was getting in trouble for “gossiping” at the grocery store, but now Mr. Waterford is chartering a plane and negotiating with the Canaian government and the government has no f*cking clue?? Tell me how.

SJ arrives in Canada and changes into some sensible flats and a cowl neck sweater, courtesy of the hot Canadian government official she met on her last trip. He’s apparently there to make sure everything goes okay and SJ doesn’t pull a Janine and try to jump off the airbridge with her baby. Good call.

Luke is absolutely stone cold, and like, I get it. He doesn’t know that Serena Joy lost her finger and had a change of heart. All he knows is that she held his wife prisoner in her home while her husband assaulted her regularly. Pretty good reason to hold a grudge, imho.

The meeting goes…not great. Luke isn’t very interested in giving Nichole the hideous necklace, which causes the old Serena to go claws out and basically low-key threaten June. It works in that Luke agrees to take the necklace, but it doesn’t work in that I doubt Luke will be inviting her to Nichole’s first birthday party or anything.

He does let her hold Nichole a little bit before heading back to Gilead with her sh*t husband and her leather finger. That was nice of him. He is repaid for his kindness by listening to a mix tape from June (this is what June wanted SJ to pass along) that is actually a cleverly disguised recording of her telling him Nichole isn’t a baby born of assault, but actually a baby born of love with her hot new military boyfriend.

I leave this scene thinking about Luke realizing that he’s been free as a bird in Canada for years getting absolutely no ass while June is getting dicked down by a hot ROTC guy on the daily while also living in a patriarchal religious slave state. That probably hurts more than the cheating, if you ask me.

Cut to: a single shot of the Zaddy family creepily listening to “Cruel to be Kind” in their living room and not talking to each other. How very Seth and Summer of them.

Serena returns to Mr. Waterford, who was not allowed in Canada because he (say it louder for the people in the back) absolutely sucks ass. He tells Serena that her relationship with Nichole “doesn’t have to be over,” and it’s like…see, Luke? This is why you have to be at least semi-nice to the crazy rich lady from Gilead who is obsessed with your baby. Have you seen her eyebrows? You don’t mess with women whose eyebrows are that good. You just don’t.

Meanwhile, June is back at the grocery story with OfNarcthew, who is actually being semi-cool for once. She apologizes for being such a bitch earlier and reveals it is because she is pregnant again. She is very sad and clearly just generally not jazzed about carrying her rapist’s baby to term. If only she had access to a safe, legal medical procedure that would help her end her pregnancy so she would not have to endure that trauma. If only.

Moments later June is arrested and I’m like, “this is why you shouldn’t be gossiping at the grocery store, bitch! You’ve been warned!” It’s honestly hard to tell what June is being arrested for at this moment. For kidnapping her baby? For attempting to kidnap her other baby? For setting up a meeting between the first kidnapped baby and her half-mom? There are so many options.

Turns out this isn’t an arrest. It’s a forced television appearance for which they make June change into a whole new handmaid outfit, complete with shawl. Just as I predicted, the Waterfords are now making an international appeal to get Nichole back, and June has to be present because…? I feel like it doesn’t help your cause to remind the entire world that this baby actually belongs to the sex slave behind you, but whatever. The entire broadcast is the creepiest thing I’ve ever seen, with the scary-ass Waterfords crying to the camera in front of their own demonic portrait.

Any reasonable human who watched this psychotic press conference would absolutely never give these freaks their baby back, and would probably start donating to a “save the babies of Gilead” fund immediately out of sheer horror. But I guess we’ll have to wait until next episode to see how the world reacts.