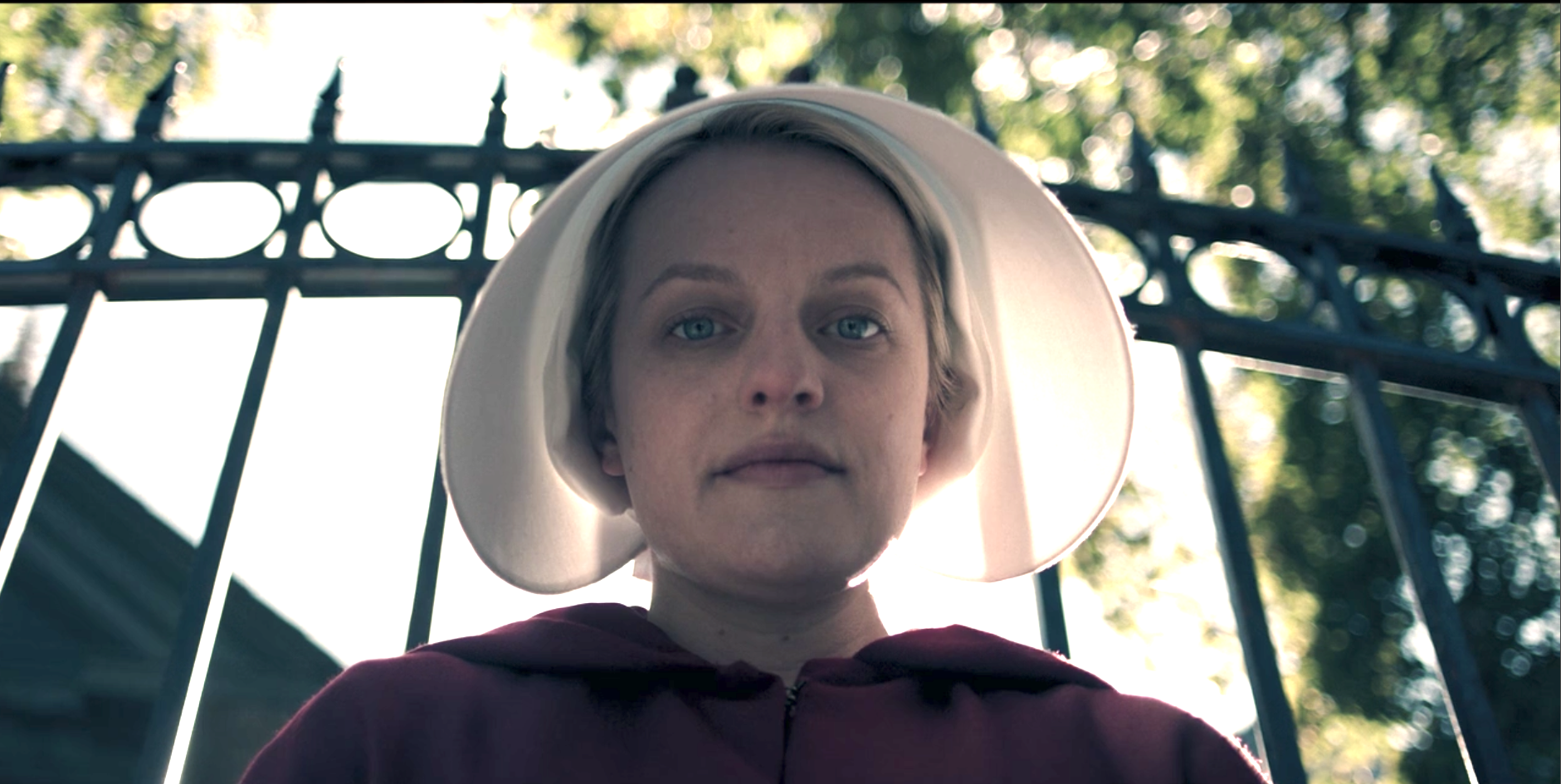 After last week’s boring ass Canadian vacation, I had a feeling Handmaid’s Tale would get back to its roots (abuse, suffering, all red outfits) and guess what bitches I was right! This week’s episode had all of season one’s mental anguish that makes you go “Why do I love this fucked up universe?” with none of season two’s actual physical torture that makes you go, “Okay but seriously why am I watching this?”

It was pure, uncut, Handmaid’s Tale this week, folks. Let’s get into it.

Last we saw our girl June, she was getting her pregnant ass pulled out of an escape plane by her feet, so we knew what happened next was not going to be great.

We open on torture, obviously. June is now chained to her bed just like Aunt Lydia told her she would be. Say what you want about Aunt Lydia, but she’s not bullshitter.

June (internal): I remember hearing on NPR once…
Me: OKAY WE GET IT HULU JUNE IS ME

Lydia pops by and we get to the central conflict of this entire episode: Is Offred Offred, or is Offred June?

Aunt Lydia: Offred can live. June must die.
Me: Umm but I just announced last week in my recap that we’re offically switching to calling her June soooo…this is inconvenient for me.

Offred/June/Whatever takes Aunt Lydia up on her offer because…duh. This makes me wonder, wtf was Ofwyatt doing? Did she not get the same deal, or was she just like, really into dying? *remembers that Ofwyatt literally drank bleach and that’s why she got in trouble* Oh, right…

And we’re back at the Waterford’s dark ass house. Somebody get these people a fucking lamp. Or is good lighting forbidden in Gilead too?

Mr. Waterford is such a fucking narc. He’s the type of guy you go on one weird Hinge date with (that you only agreed to because you were drunk), then he finishes in his pants during a pity make out and you block his number. That’s who Mr. Waterford is.

Mr. Waterford: So crazy how you were KIDNAPPED, right?!?!
Offred/June/Elizabeth Moss: ….Uh huh….

From just that one “uh huh,” we know that whoever the fuck this woman is – Offred, June, whatever – she’s sassy as hell. Move over old, meek Offred! Mean “I’ve Got Nothing To Lose Except My Shitty Life” Offred is here and she is passive aggressive as fuuuuuckkk.

Mr. Waterford: It’s so nice to have you back Of-
Offred: – Let’s get one thing straight I’m a bitch now.

Honestly for this entire interaction OfJuneFred has full crazy eyes. Like, if I took one look at her and I was Serena I’d be like, “Honestly keep the baby let’s get this bitch out of here.”

Joffred heads back to her bedroom to bask in her own sass, when Serena Joy and her bun barge in to remind Mrs. Mean Handmaid that she is not to be fucked with.

Casual reminder that Serena Joy is literally a terrorist mastermind, so choking out a pregnant lady is just like, Tuesday for her.

Offred: Wow, so nice to take a relaxing ba –
Aunt Lydia Bursting In Like The Koolaid Man: BE SURE TO WASH YOUR VAGINA!!!!!!!

You know honestly Handmaid’s Tale always finds a way to surprise you. Like when we first met Aunt Lydia I don’t think I would have predicted a moment where she and Offred lock eyes while Offred washes her vagina, but here we are. That’s all I have to say about this scene.

So I guess Aunt Lydia is like, Offred’s official OBGYN now. Also she’s the general manager of the Red Center, and the VP of torture operations. This woman has so many jobs.

Rita the Martha: Hey Offred here are all those letters I was supposed to help deliver for you but didn’t.
OfJune:

Cut to: Offred being force fed green juice like she just moved to LA or something.

My thoughts during this scene:
Now that we’ve met the econopeople, I’m wondering what has to happen to make you a Martha. Like, if handmaids were sluts in their past life, were Marthas…overeaters? Or maybe they were like, too annoying about being on the keto diet so this is their punishm – OH SHIT NICK IS STILL AT THE HOUSE OH FUCK FORGET RITA I NEED TO KNOW ABOUT NICK.

Offred pukes everywhere, either from the green juice, or from seeing her crush so unexpectedly. Either way, I get it girl.

Me when I realize we now have to watch Serena’s psychotic baby shower:

The wives are clearly all just like, the most annoying girl in your newsfeed who had a baby. Unfollow.

Luckily, Mean Junffred is here, and she’s not taking any shit.

Serena Joy: I can’t wait to feel MY baby kick – did I mention this baby is MINE?
Ofjuneoffred: I felt the baby kick last night actually.

And here is where we learn that saying “Praise be” is the Gilead way of getting out of awkward situations. It is truly the “check please!” of the Handmaid’s Tale world.

The male baby shower in Gilead is just men shooting rifles into the air while talking about politics, which I think is what people mean when they say “MAGA.”

The point of this scene is to show that there are social consequences to Mr. Waterford having his house in “disorder,” but I’m just focused on the fact that Mr. Waterford said he’s going to Canada later this year. Does this mean he’ll meet…Luke? What if he goes to Canada, and then Offred and Nick escape to Canada, and then Offred is stuck in Canada with all of her exes*?!? That’s worse than being a handmaid, TBH.

Back To The Baby Shower

Cut to: Serena and her eyebrows smoking a Virginia slim on the porch.

So I guess Lydia just like lives at the Waterford’s house now? On top of all her handmaid brainwashing and torture duties? Again, this woman is a hustler.

Lydia gives her the classic new mother “don’t get bothered by the sex slave who is carrying your baby” chat. Every new mom’s gotta have one!

Lydia also makes SJ put out her cigarette which feels fair since Serena wants to pretend she’s pregnant so bad.

Aunt Lydia: Everything that happens now must be for the good of the child.
Me, an intellectual: This feels pro-lifey.

Meanwhile, Juffred is catching up with her ‘ol pal Burn Hand. Turns out while she she was gone, OfGlen got her tongue cut out. Cute.

And of course, what weird witchy baby shower would be complete without some sort of yarn/talisman ritual in which Serena Joy prays while Offred kneels in BJ position?

As soon as I saw all their tassels I knew some fucking weird shit was going to happen.

Flashback To Offred The Homewrecker

Well, well well, turns out before Luke was June’s hipster husband, he was some other lady’s fuckboy husband. Iiiiiiinteresting.

June To Luke’s Ex-Wife: You guys have been broken up for 3 months so he’s fair game.
June 5 Seconds Later To Luke: I mean, we both know we started hooking up while you were married.

Could this be the “adultery” Aunt Lydia says got June sent to the red center? Methinks yes…

Offjune continues on her quest to ruin SJ’s freaky baby shower by reminding everyone that she’s actually like, supes fertile and has had a baby before.

Offjune: Lol when I had my baby shower we didn’t do any of this weird shit and it was littttt

As a result, Serena fucks up Rita. Because even if Offred can’t face consequences because she’s pregnant, other people can. This is what we in the business call “foreshadowing.”

Cut to: Mr. Waterford’s gross man cave, where Serena Joy is flipping out.

Serena: I want Offred out of the house! You said this was my decision.
Mr. Waterford: …sure…yeah….your decision…

Honestly cute that Serena thinks she has “choices” and “decisions” left in this life. What part of living in a patriarchal hellscape of her own design does she not understand?

If you thought our girl June was going to be allowed to fuck up baby showers in front of Aunt Lydia and nothing would happen, you haven’t been watching this show.

Soooo now we know what happened to the random econofamily. The man was hanged. The woman was turned into a handmaid, and her child was taken away. You know, this is why you should never be so judgey about someone having their baby stolen and being sold into sex slavery, Miss Econowife. It could happen to you.

Aunt Lydia: Listen, you either become Offred and chill the fuck out, or you stay June and die. Offred good. June bad. Capiche?
Offred (now dead inside): Yes Aunt Lydia.

Cut to: Fake apologies 101 with Offred.

It is at this point that I need to know like, 1000% more about Lydia. Where did she come from? How did she get this job? What is she paid? Does she get benefits?

The Waterfords accept Offred’s fake apology, and SJ heads out to the porch for another cigg. Honestly it’s a good thing she’s not the one who is pregnant. She’s addicted.

SJ takes her hair out of the bun, which is the scariest shit she’s done all season, and crawls into bed with Offred so she can play mommy to the baby in her belly. On a weirdness scale with 1 being “real life” and 10 being “Offred locking eyes with Aunt Lydia while she washes her vagina,” this scene is like an 8.5.

Flashback To Offred The Homewrecker

This scene confirms my theory that Luke’s ex-wife got June turned into a handmaid. I’m like, sure of it. Fight me.

Nick: Hey girl just so you know I totally tried to call I just —
Offred: We’ve been sent good weather.

Offred gets down the driveway and I’m about to add “we’ve been sent good weather” to my running list of bitchy things to say to your ex, when we get a glimpse into Offred’s mind and realize that this was not, in fact, a savage diss.

Me: Oh fuck. They broke Offred.