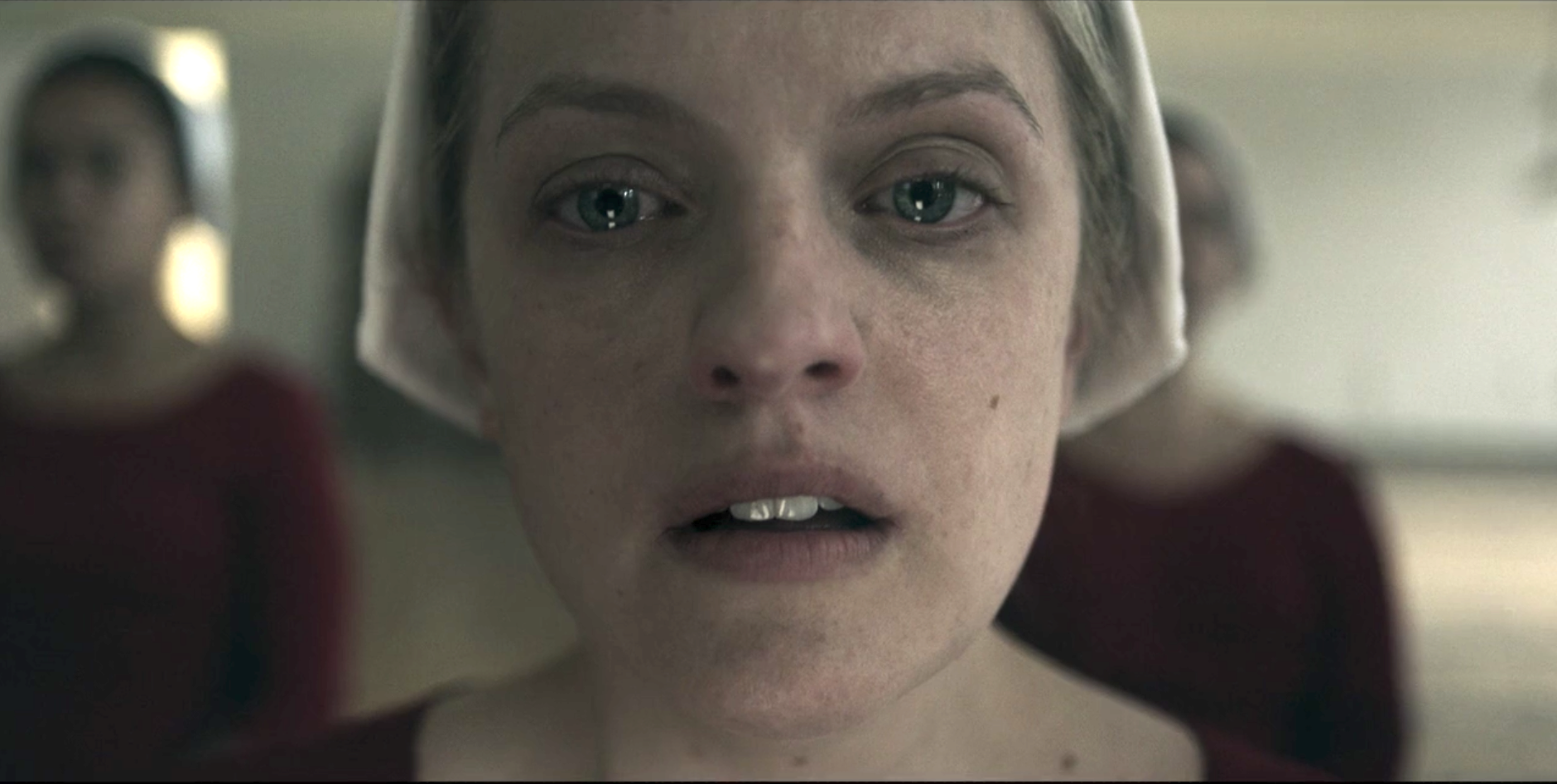 So This Is What The Normal People Do: ‘The Handmaid’s Tale’ Recap

To keep it absolutely 100, this week’s episode of The Handmaid’s Tale was boring as fuck. Are you seriously going to follow up June chopping her own ear off and Emily murdering a random woman in the colonies with…Canada? Canada is literally the less interesting version of IRL America, and we’re not even a totalitarian religious patriarchy (yet). I was happy to see Moira and all, but her plot line is now a snooze-fest that not even some aggressive bathroom finger-banging can improve.

Also, this recap marks the switch from calling our leading lady “Offred” to “June” because like, feminism and shit.

At The Old Boston Globe

June is still chilling at the Boston Globe office, where journalists were rounded up and killed for doing their job. Luckily, this is all fiction and would never happen IRL and the relationship between the government and the press has never been better. (Note to readers: do not Google “White House Correspondent’s Dinner.”)

Anyway, June has gone full serial killer in her boredom, hanging up newspaper clippings for some sort of personal scrapbooking project she’s working on. Guess you gotta pass the hours somehow.

June during this scene:

Nick: You didn’t wake me up.
June: Because If I wake you up then you leave.
Me: Ugh June don’t be so clingy guys hate that.

The old timey sea captain from episode 2 returns to tell June it is time to GTFO.

June: Hold on one sec I left my makeup bag upstairs.
Old Timey Sea Captain: Looks like you’re gonna be rocking a natural look then.

Flashback To The Dark Women’s March

Here we get to see The Handmaid’s Tale’s version of the Women’s March, which takes place at night and instead of wearing pussy hats everyone throws the name of their rapist into a fire. Sounds fun.

June: My mom told me they were burning the name of their rapist.
Me: When I was your age my mom told me babies were made when a woman swallowed a watermelon seed.

Since being a sex slave for a patriarchal government, Moira has scored a sweet Canadian internship. Nice!

Moira: So let me show you to your –
Random Guy: — I watched my gay lovers hanged and had to clean their lifeless bodies.
Moira: Umm…therapy is down the hall.

Apparently there are trauma counselors available to all Gileadean (Gileadian? Gileadite?) refugees so I guess the Canadian healthcare system has not skipped a beat throughout all of this. Good to know.

June and her mom have a classic mother-daughter relationship. June wants her mom to lay off her back. June’s mom wants her daughter to wake up to the rise of religious totalitarianism in her country. Typical coming-of-age shit

June: Hey mom! I just got promoted!
June’s Mom: I just got rocks thrown at me while serving as an abortion escort. Nice blog tho.

June: So about my wedding
June’s Mom: What part of “the country is being taken over by a hyper-religious anti-woman fascist state” don’t you understand?

June is taken to another random location that was probably used for mass murder. Seriously, who is booking June’s Airbnbs? Nick?

June is sure putting a lot of trust in random men for a woman who was forced into being a Handmaid, just sayin’.

Random Man: Come with me, I’ll take to you to the airstrip now and then you’ll be in Canada faster than you can say “Degrassi Next Generation.”
June: Amazing can’t wai —
Random Man: Lol jk the safe house was compromised.

Rather than being left alone at her nightmare loft, June throws herself in front of Random Man’s car, demanding he take her with him. Can you blame her?

Random Man’s Wife As Soon As He Gets Home:

So this is what life is like for normals (apparently called “Econopeople”) in Gilead. TBH, I didn’t realize there were just like, regular people in this world. Especially regular people with kids. June alludes to the fact that this is the life she would have lived if she hadn’t been deemed a sinner and I need like 150% more information about this family and their weird lives before I am satisfied.

The only thing we know for sure about the norms: everyone wears grey, and church is 10 hours long.

Random Man’s Wife: I would rather die than be a sex slave and give up my baby.
June: What part of “sex slave” don’t you understand?

June is left alone while the fam is at church, and she takes the opportunity to fuck with all their stuff. They don’t show her taking a shower and using all of Random Man’s Wife’s expensive hair and skincare products, but you know she totally did.

June To The Strangers’ House:

During her snooping, June finds the family’s hidden Quran and prayer mat, which she promptly lays out and uses like she’s a babysitter taking advantage of the family’s string cheese supply.

June: How could they not be back by now? This is so rude!
Me: Uhh you just sat on their prayer mat for funsies.

Flashback To Aunt Lydia Doing A Powerpoint About Global Warming

So we finally found the one thing that Gilead is low-key right about, and that’s global warming. I guess once a country has finally subjugated all the women in it’s population, they can finally focus on environmental regulations. Nobody tell them Mother Earth is a woman.

June During Most Of The Powerpoint:

June sees her mom on the powerpoint and realizes she’s has been sent to the colonies. Then she starts crying in class like she’s me sophomore year or something.

Me During This Scene/The Whole Episode:

I’m gonna go ahead and predict right now that June’s mom is still alive in the colonies where she runs an underground women’s college/lesbian abortion clinic for former handmaids.

June On The Loose

June decides her new buds are taking too long because they might have been kidnaped or whatever, and decides to grab her map, her backpack, her trusty pal boots and – oh shit sorry that’s Dora the Explorer. My b.

June does have a map tho…

June On Her Way To The Airstrip:

Ya girl throws on some ugly ass clothes, leaves the house, and within 2 second she is through an entire corn maze and back at the exact spot where she lost her daughter years ago and then to the airstrip where she will get safe passage to Canada.

Me watching this go down:

Now we see Moira’s true and terrible fate: while she can give amazing orgasms, she is not yet ready to receive them.

Moira lies about her name to her freshly fingered friend because she’s just cold like that. Then she goes home to her new weird Canadian family which consists of herself, Luke, and Erin, a mute woman we all vaguely remember from season 1 who Luke saved from Gilead.

Erin (speaking for the first time maybe?): Blessed be the Fruit Loops
Moira:

June gets through security and makes it to her flight and she is finally saved! Hooray! June and her baby are on their way to Canada and everything is fine and there is no more Handmaid’s Tale. Whew. I, for one, was exhausted. Can’t wait for the finale next week where June, Luke, and their new baby create a happy and healthy life in Little America!

Lol Jk their plane is shot out of the sky and June is pulled out of the plane by a government agent. Gotcha bitch.