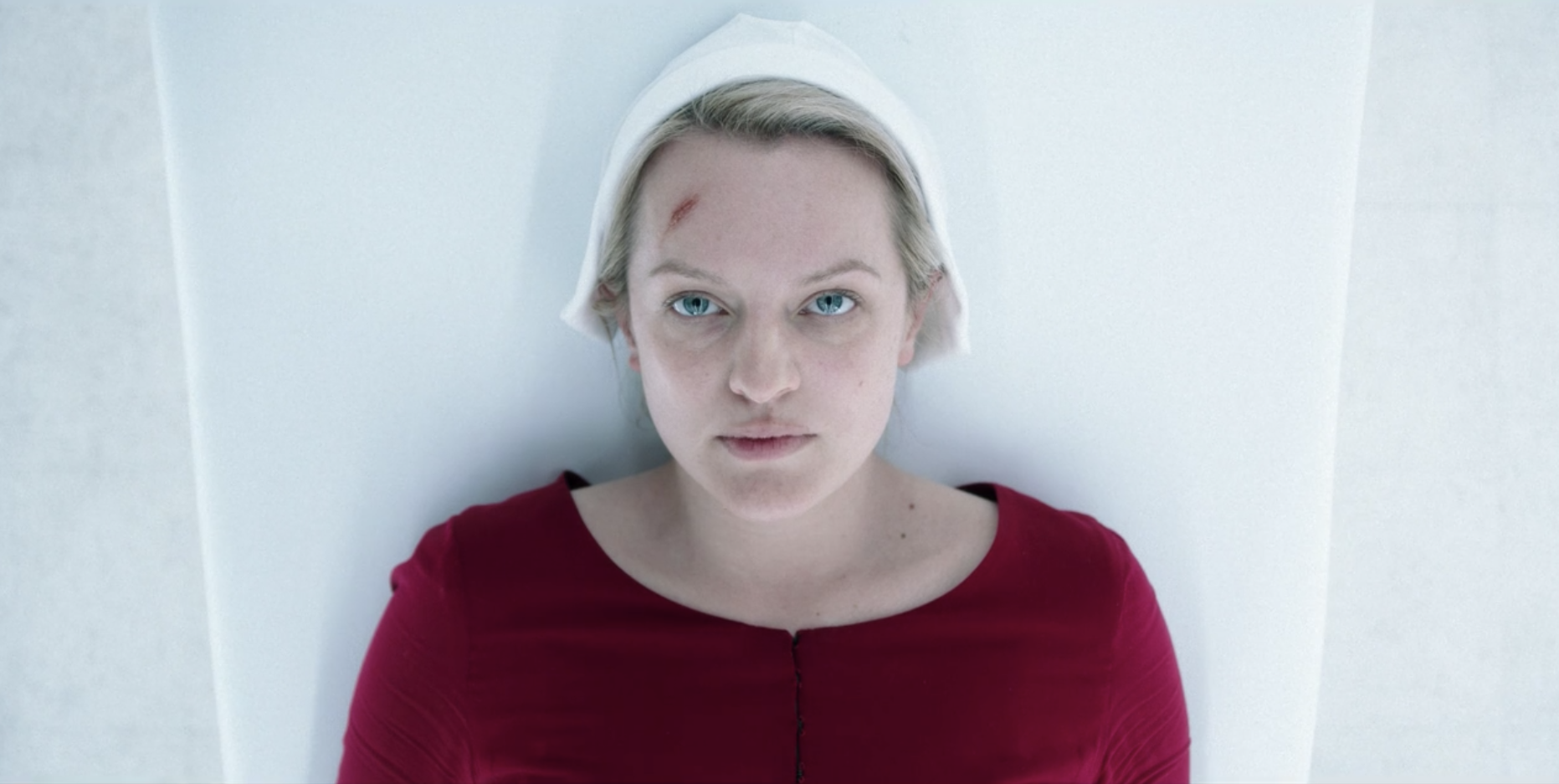 This Show Is So Stressful: ‘The Handmaid’s Tale’ Recap

After being insanely excited for the return of The Handmaid’s Tale, the good people of Hulu waste no time making you immediately regret your decision to love this show. Not because it is bad (it’s very, very good), but because it is stressful. Watching an episode of this show feels like getting yelled at by your boss while waiting for a text back and you can feel a pimple coming on. It’s excruciating. It’s horrific. And I can’t stop. Let’s dive in…

Q: How are the handmaids doing after they banded together and refused to kill Crazy-Ass One Eyeball Janine in the finale?
A:

The handmaids are all brought to a baseball field and I’m like “omg is the government gonna make the handmaids watch a baseball game!?!? Their cruel torture knows no bounds!”

But nah, they’re just going to hang everyone. Grool. Indie music plays like this is Marissa’s death on The O.C. or something, and for a brief moment I’m like “…wait, what if The Handmaid’s Tale season 2 is just five minutes long?” But no, it was all just an elaborate (and insanely expensive) prank put together by none other than everybody’s favorite psychopath: Aunt Lydia.

“Our Father, who art in heaven, seriously what the actual fuck?” – Offred after being prank hanged/me every time my parents made me go to church in middle school.

*In an original incarnation of this article, I said they were at a football field, but apparently they’re at a very famous baseball field, which just goes to show you how much I know about sports.

Flashback To Before Love Was Dead

Flashback to Offred’s hipster husband, who still doesn’t get that they’re living in a radical religious patriarchy.

Offred/June: Hey can you sign this prescription for me I need my husband’s signature to get birth control pills?
Hipster Husband: What? Really? They’re really doing that? Huh. For some reason I have not realized or been affected by these changes!
Offred/June: ….wonder why…

Offred/June is out here suggesting she and her husband have another baby like they don’t live in a radical religious patriarchy that just drained her bank account and won’t let her pick up her progesterone without zaddy’s signature.

What if the baby is a girl??? You really wanna bring another girl into this bullshit? I get that you nailed down one of the only men in Gilead who isn’t shooting blanks but, damn. This seems short-sighted.

The main takeaway from this scene is that Luke has abs. Now I get why she’s so into making a baby.

Offred And Lydia Have Brunch

Aunt Lydia is officially back on her bullshit, aka tasing people.

Some friend groups have slumber parties and brunches, some friends groups have standing in the rain holding a rock for 5 hours while your psychotic caretaker tases you. Tomato, tom-ah-to.

Lydia: Don’t you remember what it was like before?!?
Offred: Yeah I had a job and a sexy hipster husband with abs who fucked me good. How YOU doin’?

A random woman informs Lydia that Offred has a get-out-of-being-tased-free-card: she’s pregnant.

Lydia: Offred has been filled with His divine light!
Me: …that’s one way of putting it.

CUT TO: Lydia crying while sensually rubbing her face on the rope that rings the pregnancy bell. Did Aunt Lydia just lose her virginity to a bell? Does this count as the first sex scene of the season?

CUT TO: Offred and Lydia sitting down for brunch.

Lydia: Isn’t it kind of fucked up that you made everyone risk life and limb at a time when you knew you could not be physically harmed because of your pregnancy?
Me:

Just when you thought Offred was untouchable, we’re introduced to Ofwyatt, a chained up pregnant lady who lives her days in darkness because she drank bleach and almost killed her baby. I feel like the writer’s of Handmaid’s Tale started this season by googling “most fucked up things imaginable” and then writing the whole script around the results.

Lydia: Do you want to be like Offwyatt?
Offred: Hard pass.

TBH the whole “being completely untouchable while you’re pregnant” thing did seem like a pretty huge loophole in the handmaid existence. That said, keeping a pregnant lady chained up in the dark can’t be like, good for the baby.

CUT TO: All the other handmaids being tortured while Offred eats.

Offred: *casually slurps soup while friend screams in the background*
Me: Yep, sounds like a typical brunch to me.

First thing I notice right off the bat is that Offred appears to be rocking an iPhone 4. Are we supposed to believe this shit happened in 2010?!?

Gilead’s extra-ness knows absolutely know bounds, and Offred finds out that that Hannah’s school sent her to the hospital for a fever. This is why I always take my phone into meetings. Always.

Aaaand as expected, the doctor is a sexist piece of shit. Okay, lady doctor. You’re really gonna shade Offred for having a job when here you are, working at your job? Ain’t you ever heard “he who is without sin cast the first stone”? That shit is in the Bible!!!

At The Insanely Bright Gyno’s Office

TBH, of all the horrors The Handmaid’s Tale has cooked up, getting your annual pap smear in a blinding white office with an audience of three people is the worst.

Me: Oh shit! Who is that shadowy figure behind the white curtain…could it be….?
Mrs. Waterford:

Mrs. Waterford and her braid crown are back to remind us that she is a giant bitch who needs a baby. You know, in case you forgot.

This scene provides us with some Grade-A Handmaid’s Tale symbolism. The Waterfords gushing over their new baby’s ultrasound while Offred is literally hidden behind a curtain, legs in the air exposed, is everything we expect from this show. (Note to my 10th grade English teacher: See! I *do* notice things.)

Serena (aka Mrs. Waterford) gives Offred a little kiss before leaving to remind us that, in addition to being a bitch who needs a baby, she is also a very complex and contradictory individual who is many ways a victim of the same system she helped to build. Still don’t like her tho.

Offred: Under his eye, Mr. Janitor.
Janitor: Godspeed, June.
Me:

*”Somewhere Out There” from Feivel Goes West begins to play*
Me looking into the camera: Offred’s going north.

Offred uses the boot-key to embark on a v. stressful scavenger hunt of all time which leads her to…a meat truck? This has to be the only time in history that a woman ending up in the back of a meat truck was actually the desired outcome.

Flashback To How TF We All Got Here

Casual flashback to the terrorist attack Serena thought up to get us all into this mess in the first place.

Hannah: Mommy! Come back to bed with me!
Offred/June: One sec babe the world just blew up.

In The Meat Truck

Offred’s UberIce (the latest in ride sharing technology!) deposits her at her Airbnb, where she is told to STFU and lay low.

Yay! Hot limo driver Nick is here! He’s not a fuckboy after all. Tbh, the lengths dudes will go to to protect a good hookup is pretty inspiring.

Me: Wow! This scene is so cool! So inspiring! Not horrifying at a —OH MY GOD SHE’S CUTTING HER EAR OFF!!!!

The episode ends with Offred saying “I am free,” but not before she lets us know that she is 5’3, pregnant, and 120 pounds.

Offred: I’m skinny, I’m crazy, I’m pregnant, and I’m fucking coming for Gilead!
Me: Nothing but respect for my president.

Now if you’ll excuse me, I need at least a 24 hour detox before diving into episode 2.