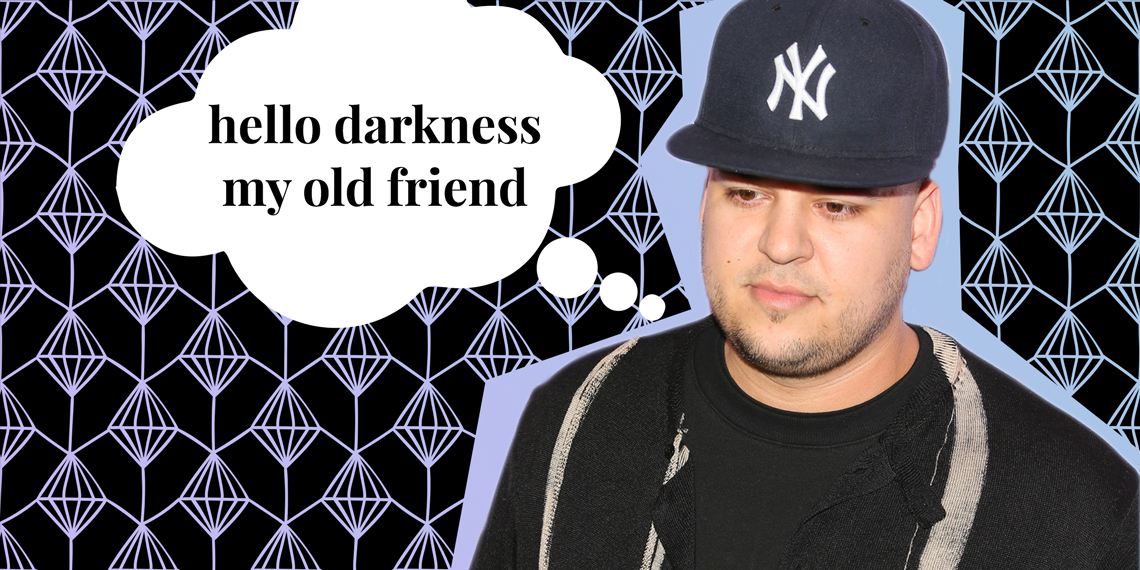 Where Did It All Go Wrong For Rob Kardashian?

In the last year, Rob Kardashian has obviously been in the news for his dramatic breakup and subsequent feud with Blac Chyna. From the moment we first found out these two were dating, we knew there was about a 2% chance it would turn out well. We weren’t sure how serious they were back in the beginning of 2016, but before we knew it, they were engaged and expecting a kid. Getting pregnant and/or engaged within the first six months of dating is always a sign of stable times to come. Their living nightmare of a relationship played out on the nauseating show Rob & Chyna in the fall of 2016, but they had already broken up by the time the show finished airing.

In the year since, Rob and Chyna have spent most of their time spewing toxic waste at each other on social media, and hopefully also caring for their infant child. Maybe. Rob’s worst moment was last summer, when he posted Chyna’s nudes, along with her phone number and allegations that cheated on him, on Instagram and Twitter. (Wow, was that only last summer? It simultaneously feels like yesterday and six lifetimes ago.) Cheating is obviously not good, but revenge porn is just never okay. This was probably the moment when we knew that Rob had fully lost his mind, but things were going south for him years before he ever met Blac Chyna.

There was a time when Rob was probably the fittest member of the Kardashian family, but now that feels so long ago it might as well be a cave painting. Rob put on a lot of weight starting in 2013, and he became increasingly isolated at the time. He almost never appeared on KUWTK, and he literally skipped Kim and Kanye’s wedding. Did the Kardashians exile Rob because he got fat? Or did he get fat because they exiled him? He says that his disappearance was due to him not feeling good about himself, which I get, but also, like, damn. In 2015, Rob was hospitalized after being diagnosed with diabetes, which is a pretty sure sign you’re not in a good place.

So yeah, Rob wasn’t doing so great from 2013 onward, but what was his life like even before he got fat?

In 2012, Rob seemed like he really wanted his life to be on a positive track. His late father was famous for being a successful attorney, and he had plans to follow in his dad’s footsteps. Rob, a USC alum, tweeted in August that he would be enrolling in USC’s law school that fall, but he was sorely confused. USC responded to the news, saying that Rob hadn’t even applied to the school, and that he definitely wouldn’t be attending anytime soon. Rob’s law career could have been so promising, if only he had, like, applied or something?

Years before the law school debacle, we met Rob as a sweet 20-year-old. He was still in college on the first season of Keeping Up With The Kardashians, and we honestly loved how he would just roll his eyes at literally everything Kim did. Simpler times, truly. At the time, he was dating Cheetah Girl Adrienne Bailon, and they seemed perfect together. Rob was obviously head over heels for Adrienne, but he fucked it up just like everything else in his life. For a long time, there was no concrete answer to why they broke up in 2009, but we got the info years later.

Adrienne confirmed that Rob cheated on her, which is annoyingly predictable. She complained that people always give her shit for not sticking with Rob, even though he’s the one who fucked her over. Meanwhile, his sisters took to social media to defend him, subtweeting Adrienne with the rage of high schoolers who didn’t get invited to the cool prom afterparty. Kim, Khloé, we love you, but your cheating mess of a brother really didn’t need your help on this one.