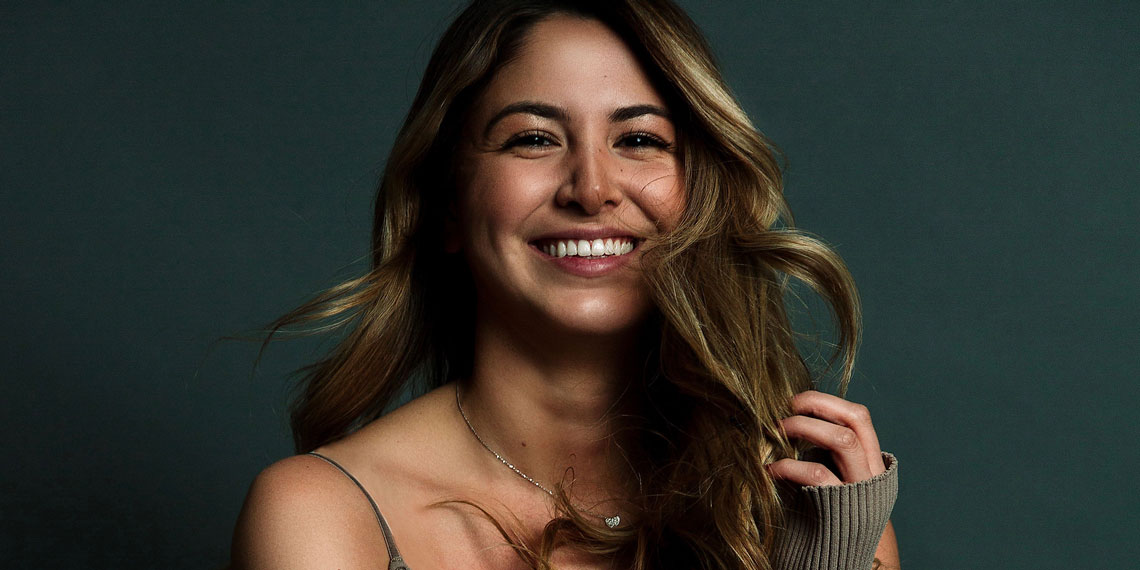 In case you haven’t noticed, Betches has a completely unhealthy obsession with reality television. When we say unhealthy, we mean the Food God’s artery-clogging Instagram meals level of unhealthy. And when we say obsession, we mean the Food God’s level of obsession with finding his name on Twitter. So who better to interview than GG, who has had a backstage pass to the reality television world for years? Maybe you remember GG’s stint as the girl who slapped James Kennedy in the face after he denied cheating on Raquel with her on Vanderpump Rules, but she also has an impressive CV that includes working as an assistant for reality show riot makers like Kris Jenner and Corinne Olympios. We sat down with GG Gilbert-Soto to get the scoop on what it’s like working for, with, and as a reality star.

How did you start working for Lisa Vanderpump?
I actually just dropped off my resume at SUR and they were desperate for hostesses so I got hired right away. They interviewed me for the show after I started working there for several months.

Do producers red flag employees and notice things so they decide who to interview? How does that process go?
Yeah, definitely. SUR actually has so many employees, like 40. And of course, only 10 are on the show, or even less. Some people refuse to be on the show, some people desperately want to be on the show. The producers kinda follow you for a couple of months and see if you interact with the cast, because if you have no relevance, you’re not gonna be on the show.

So how did you start getting wrapped up in the cast?
I actually started becoming friends with James. We started off as just friends. I thought he was cool, and um, he wasn’t. I’m actually cool with him now. I don’t actually see him, but if we run into each other, he’s pretty nice and even his girlfriend is nice to me. But I rarely see them.

Did you watch Vanderpump Rules at all?
No, not before. I knew about it but didn’t watch it. I only watched the episodes I was on.

How did you feel about the things James said about you on the show?
He was pretty mean about my appearance. It was such a low blow and the only thing he could do was try to hurt me that way, which is fine because I’m okay with the way I look. But when he was talking sh*t about me, a lot of people felt bad. A lot of people were also cheering him on, though.

Well, I get why people egg him on, because he’ll say anything for attention.
Yeah, in the episodes I watched, he was pretty entertaining. I get why he’s on the show.

Who would you say is the most different on camera versus off camera?
Um, I think Ariana and Tom because they were pretty mean to me, but then they’d be nice to me off camera. I don’t have any problem with anyone on the show. People would be so nice, but then once the cameras were on . I don’t know. They were pretty fake. But then at the end of the season, when we were doing photo shoots and stuff, everyone was pretty nice to me. I don’t know, it was just funny to see how people were mean when they needed to be.

Were you asked to join the cast?
I wasn’t. A lot of people thought I was going to, but I was not. I think it’s because I just started to not hang out with any of them anymore and I got other jobs. I was still working at SUR, but I was doing a lot of stuff outside of it. I was working as an assistant at a talent agency, which I kind of regret now, and I was only working at SUR once or twice a week and getting shifts covered. But I really do love SUR.

Why did you leave SUR?
I was doing way too much. I signed up for all these side projects. I became an assistant to Corinne from The Bachelor. But a lot of people work there for years, then they take a year off, then they go back. SUR has always had a family vibe to it, and I still talk to everybody. Some of those people are my best friends.

So are you giving up the entertainment industry for good?
I don’t know. I’m at a weird point and I’m not sure what I want to do anymore. I’m young, I’m 25. When I first moved to L.A., being famous was the only thing on my mind. Now I’m just like… I definitely wanna be rich, that’s why I’m just trying to work for my parents’ companies. I don’t want to say that I’m giving it up forever.

I mean, you were really entertaining on the show. I have actually used some of your lines before. Like, “Are there unicorns in this fantasy world where James Kennedy is loyal?”
Oh my god! That’s amazing! That was fun, being a b*tch like that. I actually heard about that Lindsay Lohan reality show and I was going to apply for that one, but it was too late.

So I always hear you worked for Kris Jenner, was that before or after Pump Rules?
That was before. It started off as a college internship at Jenner Communications. My friend was her assistant and got me the job. My friend ended up moving back to London, and Kris just started using her interns as her assistants. It became super hectic, so I was like, “Listen, I can’t do this as an intern but I’d love to be your assistant or your assistant runner,” and she was like, “Oh yeah, for sure.” But it was just too hectic for two college students to be her assistants, so I left. But it was an experience, it was kind of like, a humbling experience.

Is she a lot like Lisa?
Hmmmm, okay sometimes Kris was super cool, and other times, she was like, f*cking vicious. But it’s not her fault, she’s a businesswoman. Sometimes you have to be mean to people who work for you. I totally get it. But it was a good experience because I was a college student and I know how to work for difficult people now. Honestly, when she had a drink in her, she was the best. Like, all the assistants would text each other, like, “She’s had a drink! Go in! Mission clear, go!”

Who was your favorite Karjenner?
I didn’t get to know many of them, but I worked mostly with Kris and Kylie. I guess Kylie is my least favorite. Sometimes she was nice, but other times, because she grew up famous, she didn’t really know how to be normal. Kim, Kourtney, and Khloé know what it’s like not to be famous so they know how to be personable. Kim was living in Kris’ house when I was working, and she was actually really sweet any time I interacted with her. Kanye West, definitely number one nicest guy I’ve ever met.

Yeah, I feel like it’s all blown out of proportion when he’s in front of the camera.
Yeah, it’s like that for everyone in that world. Honestly, it’s really cliche to say this, but it’s hard to judge someone when you don’t know them off-camera. I feel bad for Kanye West because he gets so much sh*t. I feel bad that all these people get bad reputations when you don’t really know them, or have had a one-on-one interaction with them.

Is there anyone on Pump Rules you would say deserves their reputation because you know them both on and off camera?
Well, I haven’t seen the new season.

Well, Jax cheated on Brittany and Scheana was obsessed with Rob so you didn’t miss much.
I actually remember that day . I was working at SUR and everyone was at Scheana’s party.

Is Scheana the one that deserves the reputation? My money’s on her.
Ugh, honestly I don’t really like Scheana. I don’t have a problem with her but she’s the fakest girl I’ve ever met. Like, she’d come up from behind me and hug me and then I’d hear from other people that she was talking sh*t about me. So I actually think she comes off as way too good on the show. Jax is a horrible cheater but he’s always been so nice to me. Scheana, I like her least.

So how did you get your job with Corinne?
It’s so funny because I feel like everything I’ve been involved with entertainment-wise… has been so random. I was a fan because I watched The Bachelor for the first time ever. Had never seen it before Nick’s season. I thought Corinne was so funny.

I never watched it either but then I watched it for her.
Me too! I actually had a lot of friends who said, “You’re just like this girl!”

Me too! So you just saw on her Instagram story that she was hiring an assistant and DMed her?
Yeah, and she DMed me her email right away. Like, she called me a day later, interviewed me on the phone, and I went to her house a week later.

So what was an interview with Corinne like?
Um, I don’t think she’s ever interviewed somebody for a position before. It didn’t seem very professional. She just asked me a couple of random questions about my experience and was like, “Okay, you’re hired.”

So what was the day in the life of being Corinne’s assistant?
It started off with me helping her grocery shop, or just going with her to some filming thing. It was some interview, and I Snapchatted her on her phone. Even from the beginning, she said, “Part of this job is just being with me because I don’t like being alone.” I’m really shy before I get to know someone, and so she thought I was really shy and quiet. But I would just go with her to do things. And we became friends. It was kind of just me accompanying her to random interviews, or doing Fear Factor with her. We were on that for like, five minutes, but it was funny.

So you were more of like, no offense, the Jonathan Cheban to her Kim Kardashian than her Stephanie Shepard?
Hahaha yeah.

There seems to be an overlap between Pump Rules and the Bachelor franchise. What are your thoughts on Kristen Doute calling Corinne satanic and psychotic?
I actually don’t know the story behind that, but I saw Kristen do it and thought it was awesome.

What about Scheana and Robby Hayes?
Haven’t heard anything about it. Usually, when I hear Scheana’s name I just tune out because I don’t like her.

What other Bachelor franchise stars did you hang out with?
Oh, I love Jasmine. She was a cool chick.

I thought she seemed crazy.
No, she’s normal. Alexis is really funny. I met Rachel and her fiancé and they were really nice. But they’re not really close with Corinne.