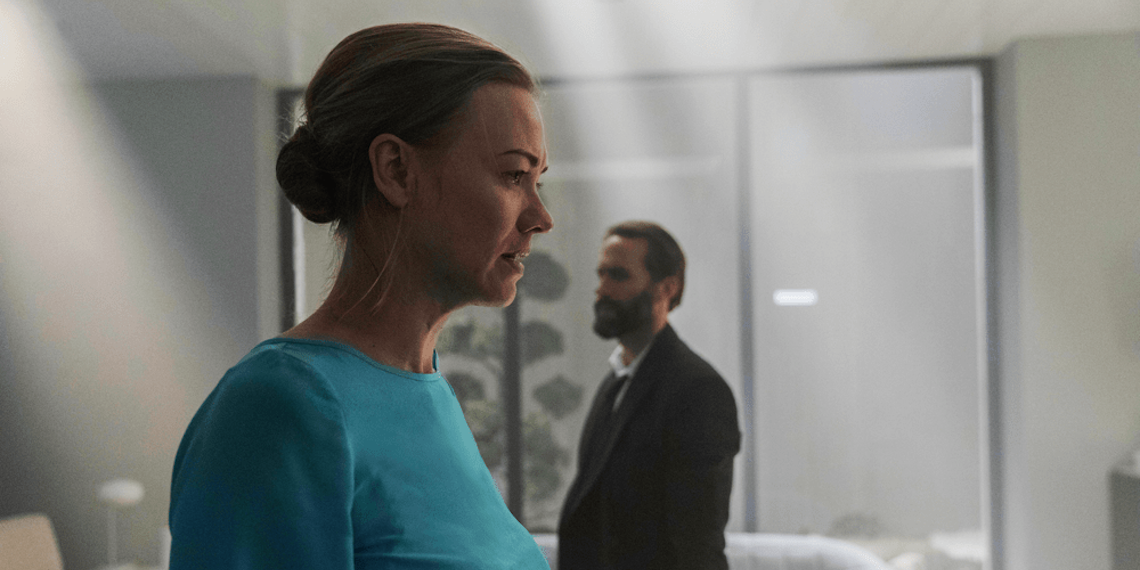 Getting Away With Murder: ‘The Handmaid’s Tale’ Recap

Before we dive into this, the penultimate episode of The Handmaid’s Tale, I want to present you all with a theory I’ve been working on. I think much like how every friend group has a Carrie, Samantha, Miranda, and Charlotte, they also have a wife, a handmaid, an aunt, and a Martha.

The wife is the rich friend who always looks chic and knows the best bars/clubs/island getaways. The downside to hanging out with her is she can be kind of a bitch sometimes and is always in a long-term relationship with the douchiest bro you’ve ever met in your life, who she insists on bringing to everything.

The handmaid is your most fun friend with a f*ck it attitude who is basically down for everything. The downside is that she comes with a lot of baggage and can turn psycho on a dime (usually after alcohol consumption), and is always embroiled in some crazy drama between herself and one of her many romantic partners.

The aunt is your responsible friend who acts as the group mom, to the point of being constantly disappointed with all of your antics. Sometimes you have to hang out without her because she’s kind of a giant asshole, but there is something about her that you guys like enough to keep her in the group (probably that she always remembers to get good photos when you’re out).

Finally, there is the Martha, your friend who gets sh*t done. Is she the hottest of the group? No. But only because she is busy getting sh*t done. She is always silently grinding while the rest of the group is fighting or f*cking (or both), and one day you sign into Twitter and see she’s on the cover of Forbes and you didn’t even know she owned a business. Make sure your group has a Martha so you can always have someone in your life who will bail you out of jail and not say sh*t about it to anybody. This is my theory and I stand by it. Sound off in the comments!

Now onto the episode, which opens on June playing with a gun and exhibiting absolutely zero gun safety techniques. She’s just swinging a loaded gun around pointing it at her own face! You know, this is exactly why Gilead needs to work on its gun problem. You can’t just have loose guns floating around, getting into the hands of untrained criminals with a long history of mental health issues. It’s dangerous! But luckily that’s just what’s happening in Gilead, and is in no way tied to real life.

Downstairs, the Marthas inform June that Billy the bartender is in for their plan because he has sent them a basket of whatever baked goods mean “hell yea let’s kidnap a bunch of kids.” One room over, Command Zaddy and some other dickless Gilead goons are chatting about the news of the day. June then offers to bring them tea because she knows the men will keep talking about all their classified info in front of her, not realizing that she can hear with her tiny woman ears, or understand with her tiny woman brain.

Apparently sh*t is going down between Canada and Gilead, because Canada “lured the Waterfords across the border and arrested them,” or whatever. Why anyone would notice or care that Fred Waterford was gone is beyond me.

June Outside As She’s Finding Out the Waterfords Are In Prison:

June Inside As She’s Finding Out the Waterfords Are In Prison:

When the goons leave, Commander Z informs June that not only are the Waterfords in custody, but the government now thinks Canada also had something to do with the disappearance of Commander Winslow, meaning they won’t be coming after her for stabbing him with a pen all those times.

As Commander Zaddy so succinctly puts it: Fred and Serena are toast, and you just got away with murder. All in all, not a bad morning.

At The Grocery Store

June is back at the grocery store, which is basically resistance headquarters at this point, to tell OfRobert the plan is ready to go. June truly could not act more suspicious as she is doing this. She dramatically looks around approximately every 2.5 seconds. Do you want to get caught?

June then goes to meet up with Rita and also talk about the top-secret plan in public. Rita had heard of June’s plan and knew it was June, because June is the only bitch crazy enough to pull something like this off. Rita says she has offered to help with the plan and the two of them clasp hands over some potatoes. It’s honestly very sweet.

Cut to: Fred Waterford having a Jeffrey Epstein moment (aka luxuriating in his unreasonably nice prison cell). Serena comes in to talk to him and I’m like…what the f*ck is this? Aren’t they supposed to be in jail? Is this what being arrested in Canada looks like? You just get to live in a sleek mid-century modern one bedroom? Brb—headed to Canada to do crimes.

Serena reveals to Fred that she’s made some kind of deal to stay in Canada with Nichole, and he should do what he can to save himself. Fred then immediately starts choking her, which is why we don’t LEAVE TWO INTERNATIONAL CRIMINAL PRISONERS TO JUST CHILL IN A ROOM ALONE WITH EACH OTHER COME ON CANADA Y’ALL CAN’T BE THIS NICE.

Back in Gilead, Madame Zaddy needs to get her sh*t together fast. She almost reveals the entire plan to Commander Winslow’s wife, who seems to somehow know that June stabbed her husband to death with a pen even though that’s impossible. Women’s intuition is really something.

Later, Lawrence tells June that the government closed the border, but their talk is interrupted by Madame Zaddy, who is trying to leave the house. She’s apparently in the middle of some kind of episode, and because Gilead thinks mental illness can be cured via tea and prayer (funnily enough, Marianne Williamson thinks the same thing), it’s only getting worse.

Whereas one episode ago June was able to calmly talk Madame Zaddy out of shooting her husband in the head, this time June loses it on MZ and starts shaking the sh*t out of her. You can’t shake Madame Zaddy! She’s basically like a baby, and you can never shake a baby! This is like harming Janine. It’s just not done.

Me: Wow this is the first mean thing June has ever done to Madame Zaddy!
Narrator: It will not be the last.

Cut to: Luke and Moira going through security at the Vancouver Ritz, aka Canadian jail. You know, I’m not saying that prisoners should live in squalor by any means, but the Canadian government appears to have provided Serena with a fully furnished one bedroom with bay windows. It also looks like she was allowed to go shopping at Ann Taylor Loft, and swing by DryBar for a blowout.. Seems a little much for the woman who literally helped blow up the White House.

Turns out whatever deal Serena has made with Canada not only includes her stylish new digs, but she also gets to visit with Nichole, the baby whose life she explicitly came to the Canada to ruin. Once again, this seems like a pretty good deal for a war criminal.

Luckily, Moira is having less-than-none of it, and proceeds to be a giant bitch to Serena from the moment she enters the room.

Moira ends her rant by telling Serena about all the times Fred visited the Jezebels, tosses off a casual “you are the REAL gender traitor!”, and sashays away. The most brutal read since Azealia Banks called Grimes a “dirty-sneaker-inbred-out of the woods Pabst beer pussy meth head junkie” back in 2013. Iconic.

Moira leaves and Serena tries to continue her playdate with Nichole and ignore the fact that she just got roasted in front of her own baby. The attendant whose job it is to watch Serena and the baby (good call) tells Serena she’s not allowed to refer to herself as “mommy” because she’s like, not actually Nichole’s mommy. All in all, a pretty bad morning for Serena Joy.

In another part of the jail, Luke is allowed to meet with Fred in his jail cell, despite there being no logical reason for a prison to allow that to happen. Whatever. It ends pretty predictably—with Luke punching Fred in the face and being dragged out screaming, “I’M NOT DONE! I’M NOT DONE!” This is why jails have rules, Canada.

The Death Of Madame Zaddy

How do we even begin to dive into the f*cked up nature of this scene? How can June, as a character, recover from what happens here? Is this going to be like in season two of Friday Night Lights when Landry straight-up kills a guy with a metal pipe and then just goes back to being the comic relief character and we’re all supposed to forget he is a stone-cold killer? Anyway, let’s get into what happened…

June goes to check on Madame Z, who hasn’t been well since her only friend in the world shook the sh*t out of her in her own home. June peeks in to bring Madame Z more of her very effective mood tea and realizes…OH SHIT. MADAME ZADDY HAS OVERDOSED. I THOUGHT SHE DIDN’T HAVE ANY DRUGS?!? I AM CONFUSED!

At first, June does the right thing and goes to get help, but then she just…doesn’t, and lets Madame Z die. Not only does she let her die, but she then just backs out of the room and pretends she was never there, so some other poor person has to find her body.

Seriously, why did she do this? Because she was almost telling people about the plan? Doesn’t this now completely remove Commander Z’s motive for helping with the plan in the first place? Why not just pretend you found her, and spare some poor Martha the trauma of finding a dead body. Why June? Why?

Next thing we know, the whole house is in mourning, particularly Commander Z, who is visibly devastated and preparing her funeral.

The final scene of the episode takes place at Madame Zaddy’s funeral, and gives us a nice little sampling of Gilead’s funeral fashions. The wives wear their traditional blue with a tiny black veil—very Jackie O—while the aunts and handmaids are just given a black cape to put over their normal clothes. Every friend group has one. We end on June looking directly to camera, because of course we do.

On to the finale!