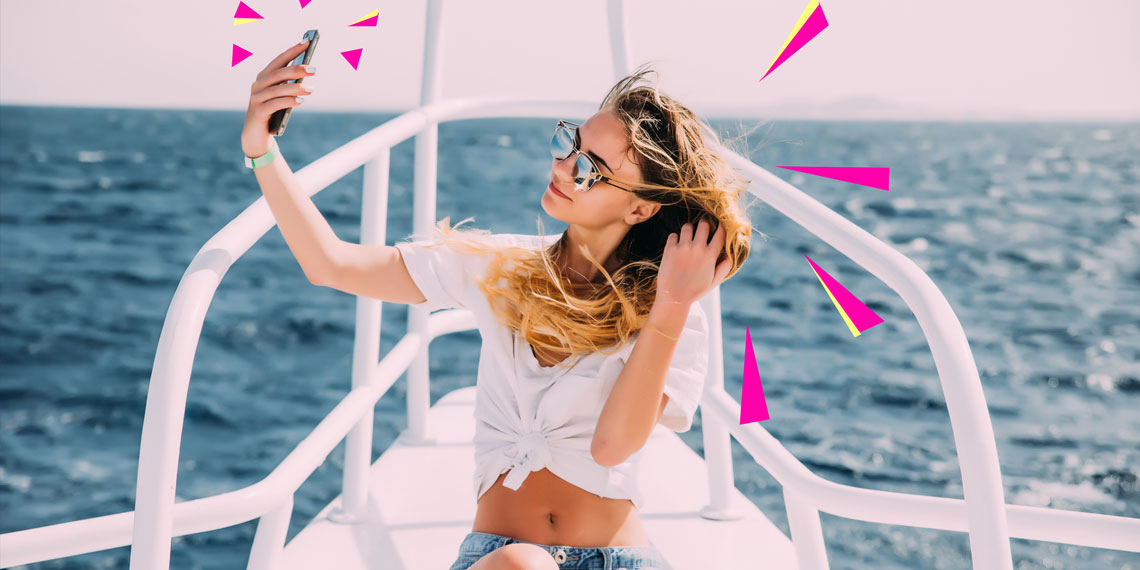 All The Sneaky Tricks Instagram Influencers Use To Appear More Popular

Even if you don’t actually follow any, there’s a pretty solid chance that your Instagram feed is constantly flooded with Instagram influencers and their captions that start with “Hey guys, I’m so excited…” and end with #linkinbio. It’s basically like a giant worldwide cult where they all act, dress, and speak the same way. Except they drink Flat Tummy Tea instead of Kool Aid.

Anyway, as much as I love creating fake conspiracy theories, I don’t actually think that all influencers are in a cult. Actually, I know they don’t. In my real life (like, outside of talking shit about the Real Housewives on the internet) I work on the opposite side of sponsored content, and manage influencer campaigns from a brand standpoint. All of the annoying stuff they do actually has very specific reasoning behind it. Basically, the influencers that have their shit together all have a media kit, or some kind of way to organize their information so that they can pitch themselves to brands to get paid for creating sponsored content. In these media kits, they want to prove that they have a shit ton of active followers that are obsessed with them, and basically every move they make on social media is to help increase those statistics. Here’s why influencers do the things that make all of us question why we have to live in the age of social media, instead of like, the 80s when everyone just teased their hair and dropped acid.

Asking You Questions That Have Nothing To Do With The Picture

You know when an Insta model posts a picture of herself in a bikini at some obscure beach in like, Australia? Like, her knees are in the sand and she’s doing that pose that makes her look somehow… skinnier? It’s a total thirst trap and the caption is like, “What’s your favorite ice cream flavor?” Like, didn’t this chick just say she’s on her third cycle of Whole30 or something? Has she even had ice cream in the past four years? ANYWAY, you know that betch is going to pull in 2k likes on that, so why is she even wasting her time trying to think of a clever caption? Everyone knows that when the thirst trap is solid, you can throw any emoji in there and it will perform on its own.

Influencers aren’t concerned with just likes, because when they pitch themselves to companies to get partnerships, they typically measure their Instagram success by engagements, which is every action taken on the post. So if you like an influencer’s post, that’s one engagement. If you like and comment, that’s two. And if they ask you a question and your comment is an answer they can respond to, their own comment will count as a third engagement.

Posting A Story Announcing They Have A New Post

Pretty much every influencer has posted at least one Instagram story of a screenshot of their profile with the square of their latest picture hidden that’s like “New post! Go see!” Like, as if anyone’s going to be surprised by another photo of them wearing head to toe Zara standing in front of brownstone that they don’t live in.

It’s not necessarily because they think that you’re going to be totally blown away by their ability to have taken yet another seamlessly executed plandid (planned candid, get it?). It’s because they’re trying to game the ever-changing Instagram algorithm. The more you engage with an account (aka, watch stories), the more likely Instagram is to show that account higher up in the newsfeed the next time you log in. So when they post that annoying screenshot, it’s to hopefully send you to their latest post right away, but then to also get you to see their content sooner the next time they post.

Ugh the dreaded SugarBearHair Vitamins boomerang dance. You know exactly what I’m talking about. Like, all influencers do that same #sponcon jig.

People are way less likely to like a photo of a girl holding a sheet mask or a packet of vitamins than a photo of a person doing actual normal human activities, like brunching. So, they post a boomerang instead because it uploads as a video and tracks views instead of likes. A boomerang that gets 2,000 views might only receive a couple hundred likes, so it at least helps to keep the illusion that they’re pulling in mad numbers all the time.

Unless you’re really into memes and tweeting about Bachelor Nation, Twitter is kind of dead. So why do influencers still constantly tweet the links to their Instagrams and blog posts? It all comes back to building up the media kit. If they add all of their Twitter followers to their “Social Followers” stats, they can make it seem like they have a larger, more active audience than they really do.

Having A Million Story Highlights

Are you even an influencer if you don’t have a solid row of story highlights with carefully curated icons that match your Instagram aesthetic? Nope. Influencers don’t just create story highlights because they think you want to see a historical detailing of every açaí bowl they’ve ever eaten. They do it to have more places to put external links on their profiles. If you have under 10k followers, you only have the ability to place a link in your bio. If you have more, you can add “swipe up” links to your Instagram stories. When brands are looking for influencers to partner with, they’ll most likely want to make sure that the influencer’s social accounts link to their website. Obviously, influencers with blogs would rather save the precious bio link for their own personal content, so story highlights give them a place to hoard all of their sponsored shit.

Going Live All Of The Time

As you probably already know, influencers love to go live on Instagram more than you like to pretend ordering sushi with brown rice is clean eating. Most people are too lazy to turn off their notifications so that Instagram doesn’t alert them when a user goes live, and influencers can really benefit from this. It’s kind of exactly like how AOL still makes bank off of all of the old people who ordered dial up in the 90s and forgot to cancel it when their grandchildren came and helped them setup a wireless router. When you accidentally tune into an influencer’s Instagram live, it helps them get another set of eyes on their FabFitFun box.

Now you’ll never have to ask these questions to your group chat again. You’re welcome.