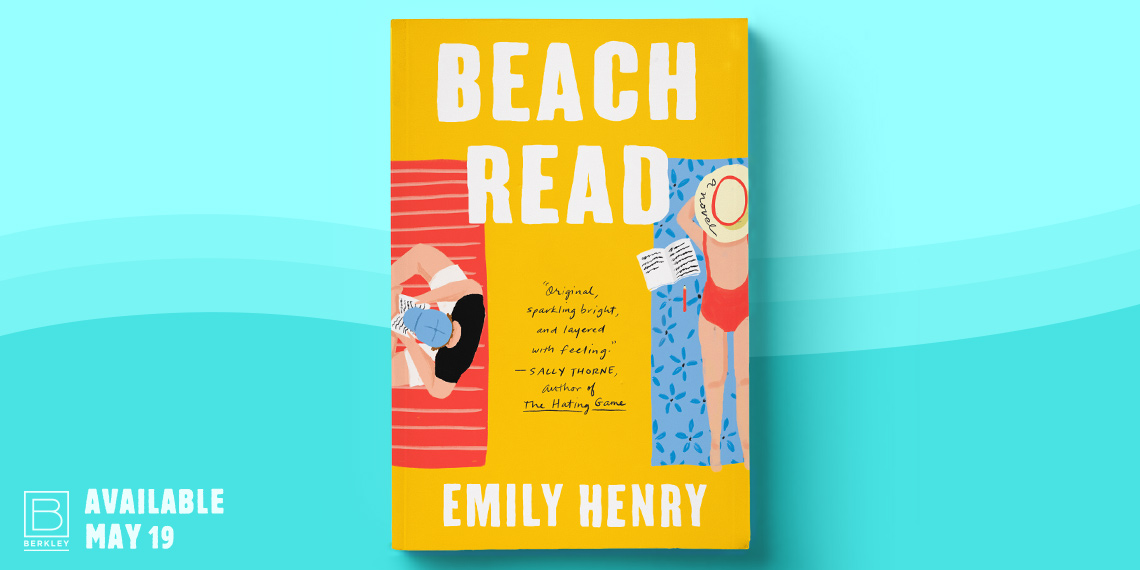 Need something light and fun to brighten up your week? Maybe a breezy read that could help you believe in love again? I’ve got just the thing. Emily Henry, author of 2016’s The Love That Split The World, is back with her newest novel, Beach Read, and it’s a total “title checks out” moment. I know it’s still winter, but picking up this novel will make you feel like you’re on vacation.

Beach Read is a classic story of “girl meets boy, girl hates boy, girl is pretty sure boy hates her too when in fact that’s not at all the case and they end up falling in love”. But nerds like me will love the cute literary twist, which is that both characters are writers. January, the protagonist, writes romance novels (how meta) and Gus, the guy she kinda-sorta hates, writes sad boi fiction. As I mentioned in my 2020 reading list, they make a bet to attempt to write each other’s genres, and ~things happen~ in the process.

Beach Read is Emily Henry’s adult fiction debut, and the praise is already rolling in. Sally Thorne, USA Today bestselling author if The Hating Game, called it “sparkling bright”, and Jasmine Guillory, New York Times bestselling author of The Proposal (and Betches fave The Wedding Party), raves, “I closed this book with a satisfied sigh.” Beach Read is out May 19, so you can preorder it now, but Betches readers can get an exclusive first look below.

When I jerked awake, the room was dark, and there was music blasting through it.

I stood and ambled, dazed and gin-fogged, toward the knife block in the kitchen. I hadn’t heard of a serial killer who began each murder by rousing the victim with R.E.M.’s “Everybody Hurts” but I really couldn’t rule the possibility out.

As I moved toward the kitchen, the music dimmed, and I realized it was coming from the other side of the house. From the Grump’s house.

I looked toward the glowing numbers on the stove. Twelve thirty at night, and my neighbor was blasting a song most often heard in dated dramedies wherein the protagonist walks home alone, hunched against the rain.

I stormed toward the window and thrust my upper body through it. The Grump’s windows were open too, and I could see a swath of bodies lit up in the kitchen, holding glasses and mugs and bottles, leaning lazy heads on shoulders, looping arms around necks as the whole group sang along with fervor.

It was a raging party. So apparently the Grump didn’t hate all people, just me. I cupped my mouth around my hands and yelled out the window, “EXCUSE ME!”

I tried twice more with no response then slammed the window closed and circled the first floor, snapping the others shut. When I was finished, it still sounded pretty much like R.E.M. was playing a concert on my coffee table.

And then, for a beautiful moment, the song stopped and the sounds of the party, laughter and chatter and bottles clinking, dipped to a static murmur.

And then it started again.

The same song. Even louder. Oh God. As I pulled my sweatpants back on, I contemplated the advantages of calling the police with a noise complaint. On the one hand, I might maintain plausible deniability with my neighbor. (Oh, ’twas not I who called the constable! I am but a young woman of nine and twenty, not a crotchety old spinster who loathes laughter, fun, song, and dance!) On the other, ever since I lost my dad, I’d had a harder and harder time forgiving small offenses.

I threw on my pizza-print sweatshirt and stormed out the front door, marching up the neighbor’s steps. Before I could second-guess myself, I’d reached for the doorbell.

It rang out in the same powerful baritone as a grandfather clock, cutting through the music, but the singing didn’t stop. I counted to ten, then rang it again. Inside, the voices didn’t even waver. If the partygoers heard the doorbell, they were ignoring it.

I pounded on the door for a few more seconds before accepting no one was coming, then turned to stomp home. One o’ clock, I decided. I’d give them until one before I called the cops.

The music was even louder in the house than I remembered, and in the few minutes since I’d shut the windows, the temperature had risen to a sticky swelter. With nothing better to do, I grabbed a paperback from my bag and headed for the deck, fumbling for the light switches inside the sliding door.

My fingers hit them but nothing happened. The bulbs outside were dead. Reading by phone light, at one in the morning, on the deck of my father’s second home it was! I stepped out, skin tingling from the refreshing chill of the breeze coming off the water.

The Grump’s deck was dark too, except for a lone fluorescent bulb surrounded by clumsy moths, which was why I nearly screamed when something moved in the shadows.

And by nearly screamed, I of course mean definitely screamed.

“Jesus!” The shadowy thing gasped and shot up from the chair where it had been sitting. And by shadowy thing, I of course mean man who’d been chilling in the dark until I scared the shit out of him. “What, what?” he demanded, like he expected me to announce that he was covered in scorpions.

If he had been, this would be less awkward.

“Nothing!” I said, still breathing hard from the surprise. “I didn’t see you there!”

Technically, I didn’t see him now either. The porch light was a few feet behind and above him, transforming him into nothing but a tallish, person-shaped silhouette with a halo ringing his dark, messy hair. At this point, it would probably be better if I managed to go the whole summer without having to make eye contact with him anyway.

“Do you also scream when cars drive past on the highway or you spot people through restaurant windows? Would you mind blacking out all our perfectly aligned windows so you don’t accidentally see me when I’m holding a knife or a razor?”

I crossed my arms viciously over my chest. Or tried to. The gin was still making me a little fuzzy and clumsy.

What I meant to say—what the old January would’ve said—was Could you possibly turn your music down a little bit? Actually, she probably would’ve just slathered herself in glitter, put on her favorite velvet loafers, and shown up at the front door with a bottle of champagne, determined to win the Grump over.

But so far, this was the third worst day of my life, and that January was probably buried wherever they put the old Taylor Swift, so what I actually said was “Could you turn off your sad-boy angsting soundtrack?”

The silhouette laughed and leaned against his deck railing, his beer bottle dangling from one hand. “Does it look like I’m the one running the playlist?”

“No, it looks like you’re the one sitting in the dark alone at his own party,” I said, “but when I rang the doorbell to ask your frat brothers to turn down the volume, they couldn’t hear me over the Jell-O wrestling, so I’m asking you.”

He studied me through the dark for a minute—or at least, I assumed that was what he was doing, since neither of us could actually see the other.

Finally, he said, “Look, no one will be more thrilled than me when this night ends and everyone gets out of my house, but it is a Saturday night. In summer, on a street full of vacation homes. Unless this neighborhood got airlifted to the little town from Footloose, it doesn’t seem crazy to play music this late. And maybe—just maybe—the brand-new neighbor who stood on her deck screaming foot job so loud birds scattered could afford to be lenient if one miserable party goes later than she’d like.”

Now it was my turn to stare at the dark blob.

God, he was right. He was a grump, but so was I. Karyn and Sharyn’s vitamin-powder pyramid-scheme parties went later than this, and those were on weeknights, usually when Jacques had a shift at the ER the next morning. Sometimes I’d even attended those parties, and now I couldn’t even handle Saturday-night group karaoke?

And worst of all, before I could figure out what to say, the Grump’s house went miraculously silent. Through his illuminated back doors, I could see the crowd breaking up, hugging, saying goodbyes, setting down cups, and putting on jackets.

I’d argued with this guy for nothing, and now I’d have to live next to him for months. If I needed sugar, I was going to be shit out of luck.

I wanted to apologize for the sad-man angst comment, or at least for these goddamn pants. These days, my reactions always felt outsized, and there was no easy way to explain them when strangers had the bad fortune of witnessing them.

Sorry, I imagined myself saying, I didn’t mean to transform into a crotchety grandmother. It’s just my dad died and then I found out he had a mistress and a second house and that my mom knew but never told me and she still won’t talk to me about any of it, and when I finally came apart, my boyfriend decided he didn’t love me anymore, and my career has stalled, and my best friend lives too far away, and PS this is the aforementioned Sex House, and I used to like parties but lately I don’t like anything, so please forgive my behavior and have a lovely evening. Thank you and good night.

Instead, that knife-twisting pain hit my gut, and tears stung the back of my nose, and my voice squeaked pathetically as I said to no one in particular, “I’m so tired.”

Even silhouetted as he was, I could tell he went rigid. I’d learned it wasn’t uncommon for people to do that when they intuited a woman was on the verge of emotional collapse. In the last few weeks of our relationship, Jacques was like one of those snakes that can sense an earthquake, going taut whenever my emotions rose, then deciding we needed something from the bodega and rushing out the door.

My neighbor didn’t say anything, but he didn’t rush away either. He just stood there awkwardly, staring at me through the pitch-dark. We faced off for easily five seconds, waiting to see what would happen first: me bursting into tears or him running away.

And then the music started blaring again, a Carly Rae Jepsen banger that, under different circumstances, I loved, and the Grump startled.

He glanced back through the sliding doors, then to me again. He cleared his throat. “I’ll kick them out,” he said stiffly, then turned and went inside, a unanimous cheer of “EVERETT!” rising from the crowd in the kitchen at the sight of him.

They sounded ready to hoist him up into a keg stand, but I could see him leaning over to shout to a blonde girl, and a moment later, the music fell silent for good.

Well. Next time I needed to make an impression, I might be better off with a plate of LSD cookies.