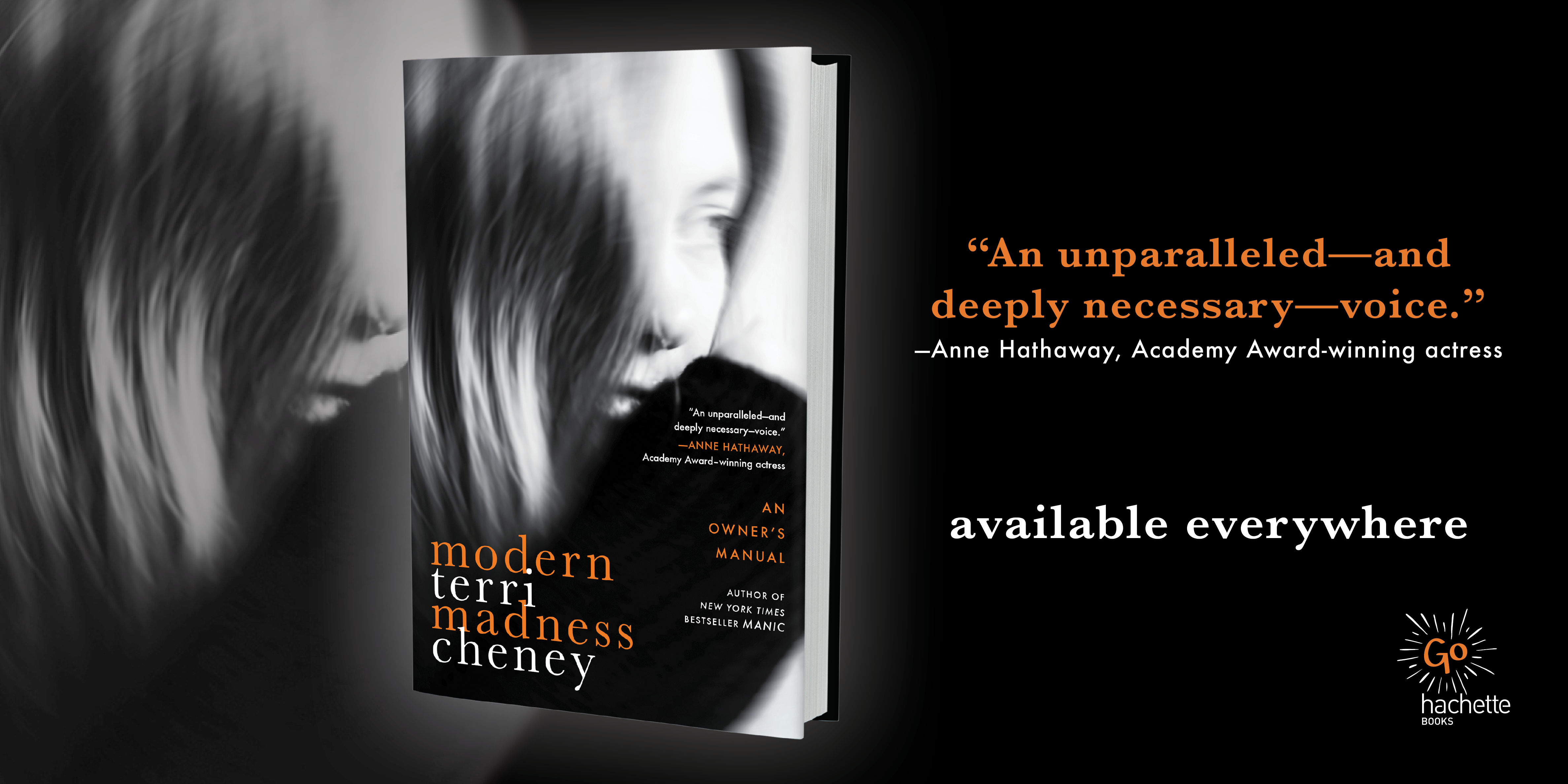 Remember back in October 2019 when Modern Love came out on Amazon Prime, and for a moment there it seemed like wholesome, pure things like romance actually existed in the world? Yeah, me either. If you watched the Amazon Prime series, you definitely remember the episode with Lexi (played by Anne Hathaway), a young woman who was struggling with bipolar disorder. That was based off the Modern Love essay by Terri Cheney, a NYT best-selling author and former attorney to the stars, whose new book MODERN MADNESS: An Owner’s Manual is out September 8.

In the middle of a pandemic that has worsened a mental health crisis in America, Cheney offers an honest, poignant work of nonfiction that discusses all the ways her battle with bipolar disease has affected her life, and offers lessons to be learned. Whether you struggle with mental health or care about and want to support someone who does, MODERN MADNESS is a necessary read. But don’t just take my word for it: Anne Hathaway, who blurbed the book, says, “Terri Cheney’s unflinching commitment to telling her own truth on her own terms moved me into a new place of compassion. Hers is an unparalleled—and deeply necessary—voice.” And now, Betches readers can get a first peek at MODERN MADNESS. Check out the excerpt below, and be sure to order your copy today.

Back when I was still a practicing lawyer, I developed a lovely bad habit of dropping out of sight and reemerging in Santa Barbara. I didn’t tell my friends or my bosses where I was going. I just disappeared into the sunset over Pacific Coast Highway, listening to Joseph Campbell’s Follow Your Bliss audiotape and scheming how I could quit my job. I was usually manic when I did this, or on the brink of becoming so.

I remember pulling into the sweeping driveway of the Biltmore Hotel one time. The pink bougainvillea that draped the entrance rustled in the ocean breeze, welcoming me.  “Aaaah,” I sighed, as the valets and bellhops swarmed my car. A disturbingly handsome young man, dark-eyed and deeply tanned in a spruce white uniform, opened the car door for me. Mindful of his gaze, I extricated myself slowly, holding his hand for balance. I felt like a princess making an entrance—until I gracefully tripped, landing splat on the cobblestones. My purse flew open and all its contents went sprawling out over the drive.

The valet did his best to recover my things, even scrambling under my car to retrieve my lipstick. Despite his efforts, a few papers were lost to the wind.  They were probably just related to work, I thought. Good riddance. I tried to tip him, but he refused. “Please,” I insisted, but he shook his head. “It’s my pleasure,” he said, as he ushered me into the lobby.

“You’re awfully kind,” I said, feeling that old familiar risk-taking tingle. “Can I buy you a drink when you’re free?” (I’m so practiced at asking men out for drinks when I’m manic, I could lecture on it at Vassar.)

“Terrific!  I’ll meet you in the lounge.”

I went to my room to unpack. Something was missing, but I couldn’t say what. Perfume? Check. Mascara? Check. Stilettos? Check, and check. I slipped them on with a sexier dress and some racy new lingerie. But the feeling continued to nag at me: what had I forgotten? Was it important? Would I need it? Oh well, I shrugged. Whatever it is, I can buy it in the gift shop later.

I went to the lounge, ordered myself a tequila sunrise, and settled in to wait. The bar was busy—lovers and tourists cooing over the magnificent view of the ocean. I glanced in that direction: a sunset. Pretty, but I’d seen it before. I was more interested in the view of me. I took great care to arrange myself on the stool—a little leg, a glimpse of shoulder, just indiscreet enough to be noticed.

A man at the bar came over to me. Another dashing devil, only this one had blue eyes, and was wearing a crisp white shirt with epaulets. Having dated a pilot once, I knew what those four bars meant: a captain.

“That?” I waved my hand at the panorama.

“That, among other things,” he said.  He looked down at my empty glass. “Can I buy you a sunrise?” he said, and I giggled. It sounded salacious to me, but then most things do when I’m manic.

I put a finger to my lips. “Incognito,” I whispered. “So tell me, which airline are you with?”

“I fly corporate,” he said. I’ve never once dated for money, but still: visions of Lear Jets and Gulfstreams flitted before my eyes. At the slightest whim, we might be off to Acapulco or Paris or wherever for the weekend. Imagine all the art I could see, the tales I could tell, the glitz and the glamour of a jet-setting life…

“Yes, you may buy me a drink, Captain Dan.” I heard the rhythmic lilt in my voice, and for a moment, I felt uneasy—but I wasn’t sure why.

He drank Glen Livet, as all men should. I kept to tequila, but switched to shots on his dare. Probably not a wise idea: alcohol is trouble enough on its own, but it instantly kindles my mania, as if a match is being held to my brain. I downed another shot, and fire exploded inside me: oranges and violets and flamingo pinks, as if I’d swallowed the sunset instead.

I felt a hand on my shoulder and turned around: the handsome valet. The two men immediately started sizing each other up. I got in between their glares and said, “This is my old friend, um—I’m sorry, I don’t know your name.”

“Dan, meet David,” I said. Or should it be “David, meet Dan”? It was getting awfully hot in there; droplets of sweat snaked down my back, and I was suddenly flushed and confused. Why were they both wearing white uniforms? Should I be wearing one, too?

“Give me a minute to change,” David said. “Hotel policy.”

“Not yet,” he said, and he winked. I laughed, but Captain Dan didn’t seem amused.

A jazz combo started playing, annoying and loud. The music inside my head was so much nicer. “It’s suffocating in here,” I said. “Let’s leave a note with the bartender so David can find us.” I scribbled two words on a cocktail napkin and handed it to Captain Dan. He looked at it quizzically. “The ocean?” he said.

“But I don’t have a bathing suit.”

It didn’t take him long to settle our bill after that. When we stepped outside, the night had turned cool and windy. “I need to get my pashmina,” I said. “Back in a flash.” It didn’t occur to me how absurd this was—as if a small, silky shawl could keep the chill off my wet, naked body. Captain Dan leaned against a pillar and lit a cigarette. I spotted David coming up the path behind him. I wondered if I should stay and soothe the tension, but then I figured it would be so much more fun to watch the sparks fly.

I hurried to my room and grabbed my pashmina. A paper came fluttering out from its folds—a page from a legal pad.  I’ll deal with it later, I thought, and was starting to put it back into my suitcase when I saw the title, in red ink and all caps: “WARNING!  READ IMMEDIATELY!” Uh-oh, I thought. This can’t be fun. But I sat down on the bed, smoothed out the well-worn paper, and read:

If you suspect you’re getting manic, you probably are. You MUST obey these ten sacred rules:

My manic cheat sheet. I kept multiple copies of it with me at all times—in my glove compartment, my suitcase, my briefcase, my purse. That must have been the paper that flew away when I fell. I’m supposed to read it every day, but frankly, I forget to when I start to feel high. Or more likely, I don’t want to. But those rules had saved me countless times, from danger and improvidence and self-sabotage and worse. I carried them for a reason, and I reluctantly admitted that I ought to heed their advice.

Thinking wistfully of the two men waiting for me, I kicked off my heels and slipped off my dress, and put on the thick white terry cloth robe provided by the hotel. How perfect: my very own white uniform. Was I being rude? No, I was being safe. I locked the door and shut off the lights and pretended that I hadn’t done any real harm—or at least, not too much. Maybe—but it was also safe.