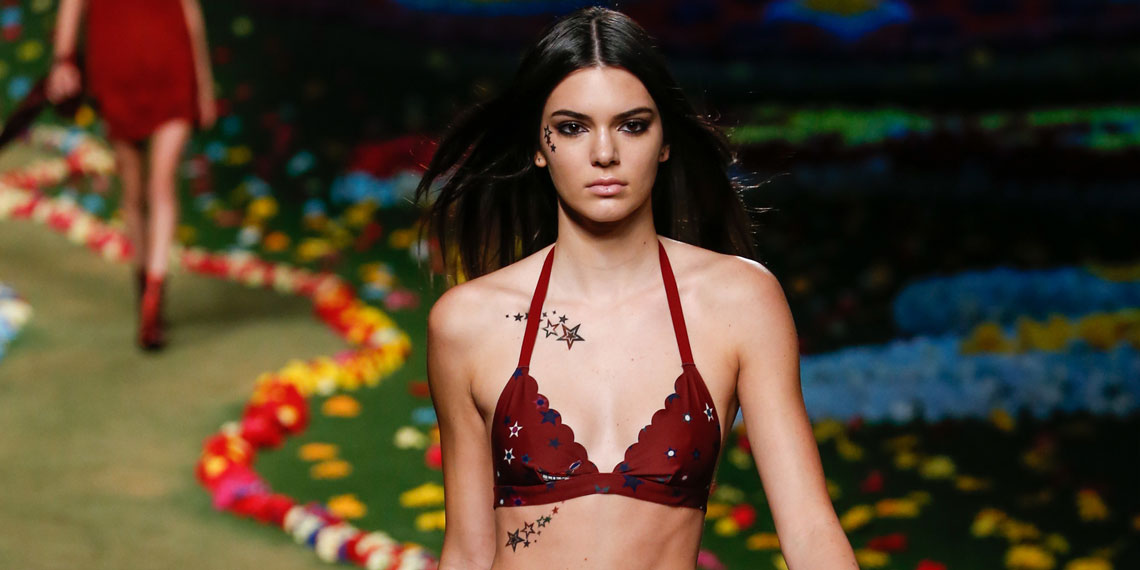 Everything You’ve Ever Wanted To Know About Fashion Week

NYFW is just around the corner and, before you know it, your Insta feed will be flooded with pics of celebs, influencers, and that girl from high school who went to Zara once and now has a fashion blog. I agree, Fashion Week can be annoying af. But it’s totally important to be in the know about everything Fashion Week so that you can stay ahead of the upcoming trends. For those of you who know little to nothing about fashion, consider this article your version of Fashion Week for Dummies. Now, you’re probably dying to know which celeb will have the honor of sitting front row next to Anna Wintour this fall? And, even more importantly, who will get a better seat at the shows: True Thompson or Stormi Webster??? (Yeah, I didn’t know that was Stormi’s last name either. Apparently, Travis Scott’s real name is Jacques Webster #themoreyouknow.) Well, I don’t have all the answers, like why the f*ck Travis Scott’s name isn’t actually Travis Scott. BUT, I do have the answers to your most basic Fashion Week questions. So let’s get to it. Here’s everything you’ve ever wanted to know about Fashion Week but were too embarrassed to ask.

Wtf Is Fashion Week, And Why Does It Matter?

Fashion Week is when the industry’s top designers present their collections for the upcoming season to the industry’s “elite.” Traditionally, this is done through the format of an actual fashion show. Although, in recent years, the formats designers are choosing to use has begun to change. (More on that later.)

Why Does It Seem So Much Longer Than A Week?

Because, realistically, it’s more like Fashion Month. There are four different Fashion Weeks that each occur in four different cities: New York, London, Milan, and Paris. The location of a designer’s show or presentation is based on where he or she is from and/or where their brand is headquartered.

How Long Are The Actual Shows?

Most runway shows only go for 10-20 minutes, with about 30 to 40 looks per show. However, it’s extremely rare that any show actually ever starts on time. So yes, it’s cool to be “fashionably late.”

You MUST be invited to Fashion Week. This isn’t some free-for-all where you can just walk in with the local homeless guy. And, if you actually are invited but aren’t an editor, celebrity, or fashion blogger, then you’re def not sitting front row (if you even get a physical a seat at all.) If you’re not an industry “somebody”, you’ll probs have a “standing” seat. For those commoners who can’t even score a standing “seat”, you can live stream most of the shows from home.

Why Do People Go?

Mainly, publicity. Celebs go and sit front row to either support designer friends or to promote specific brands. A la the Kardashians front row at Balmain, who are besties with Oliver Rousteing. A lot of store buyers go to Fashion Week to start envisioning their orders for the upcoming season. Editors go to forecast trends and select pieces they may want to feature in their magazines.

Why Are The Clothes In The Shows Stuff Normal People Would Never Actually Wear?

The runway shows aren’t for “normal” people. Designers present product that is relatively different than what is actually sold in store. The shows present exaggerated or more dramatic versions of what will actually be available for sale. Designers do this in order to have a greater artistic impact and present a stronger sense of the theme of the collection. It’s kind of like when you dress over-the-top hot to catch the attention of your ex at the bar.

The short answer? A lot. The format of the shows is the biggest change happening right now. Some designers are forgoing the traditional “show” format completely. Instead, some are opting for a presentation set-up where the models basically just act as mannequins. Other designers are choosing to just invite select people to their showroom. While still, others are opting for completely different settings and experiences for their “shows”, such as restaurants, styled suites, and cocktail parties.

Designers are doing this to create more Instagram-friendly environments. Designers want to create more interactive experiences because, in today’s world of Instagram, they recognize that the power of their collections is its visibility on social media. They know that if their collection is all over your Insta feed, that will have a greater impact than them hosting an expensive show. Other than changing the format of their shows, some designers are changing the timing of their shows altogether. For example, Alexander Wang announcing he is leaving NYFW completely in favor of a June and December schedule, which allows for a “see now, buy now” model. Basically, designers are starting to break the traditional Fashion Week rules because the rise of social media has changed the need and exclusivity of being at an actual show.

So You’re Saying Instagram Is Causing The Demise Of Fashion Week?

I mean, it’s causing the downfall of our society, so it should come as no surprise that it’s the downfall of Fashion Week as well. *Pauses to Insta a post from this weekend.* With the fall of print media, specifically print magazines, newer generations aren’t influenced by magazines the way past generations were. Rather, they’re influenced by social media. Social media has created a newfound transparency and access between designers and consumers, and designers realize they need to capitalize on this. Not only that, but in today’s instant gratification economy, consumers want to see it now and have it now. Thus, many designers are now rolling out “see now, buy now” collections rather than showing product that won’t be available for several months. Basically, designers are breaking free from traditional Fashion Week rules in order to meet the more direct-to-consumer in today’s market climate.

Most Importantly, How Can I Go To The Parties?

Unless you’re an “elite” member of the fashion industry, it’s going to be a little more challenging than looking hot and flirting with the door guy. But, if you’re willing to strap on some balls to get there, there are a few tactics to making it happen. The most important aspect of whichever approach you choose is to act super assertive and aggressively confident. Like, even more confident and direct than back in the day when you had to present your fake that looked nothing like you to the suspicious bouncer. One way to manipulate your way into a party is by telling the door person that you’re someone famous’ niece or nephew. Like, would you know Tom Cruise’s niece if you saw her? Does he even have a niece? Idk, and I doubt the person at the door does either. Another method is to call ahead to the party or venue pretending to be your own publicist. Tell them that you want to add your client (aka yourself) to the guest list. Another idea is to pretend you work for a media company. Really get into character and make some fake business cards and wear a nice camera around your neck. You’ll probs look legit enough to just get let in. Oh, and take advantage of the nervous interns who don’t know any better. Or, show up early and tell the person at the door you’re an intern working the party. Realistically, an intern’s boss barely knows his/her name. Meaning, the door guy def won’t know your name or even who is and isn’t an intern. When none of that works? Money talks. Offer to bribe the door person. He or she works in the fashion industry, which means they make little to no money but have an addiction to nice things. Slip him or her that hundo that gets her one step closer to buying the latest Gucci sneaks and it’s super unlikely she’ll turn you down. I know I sure wouldn’t.