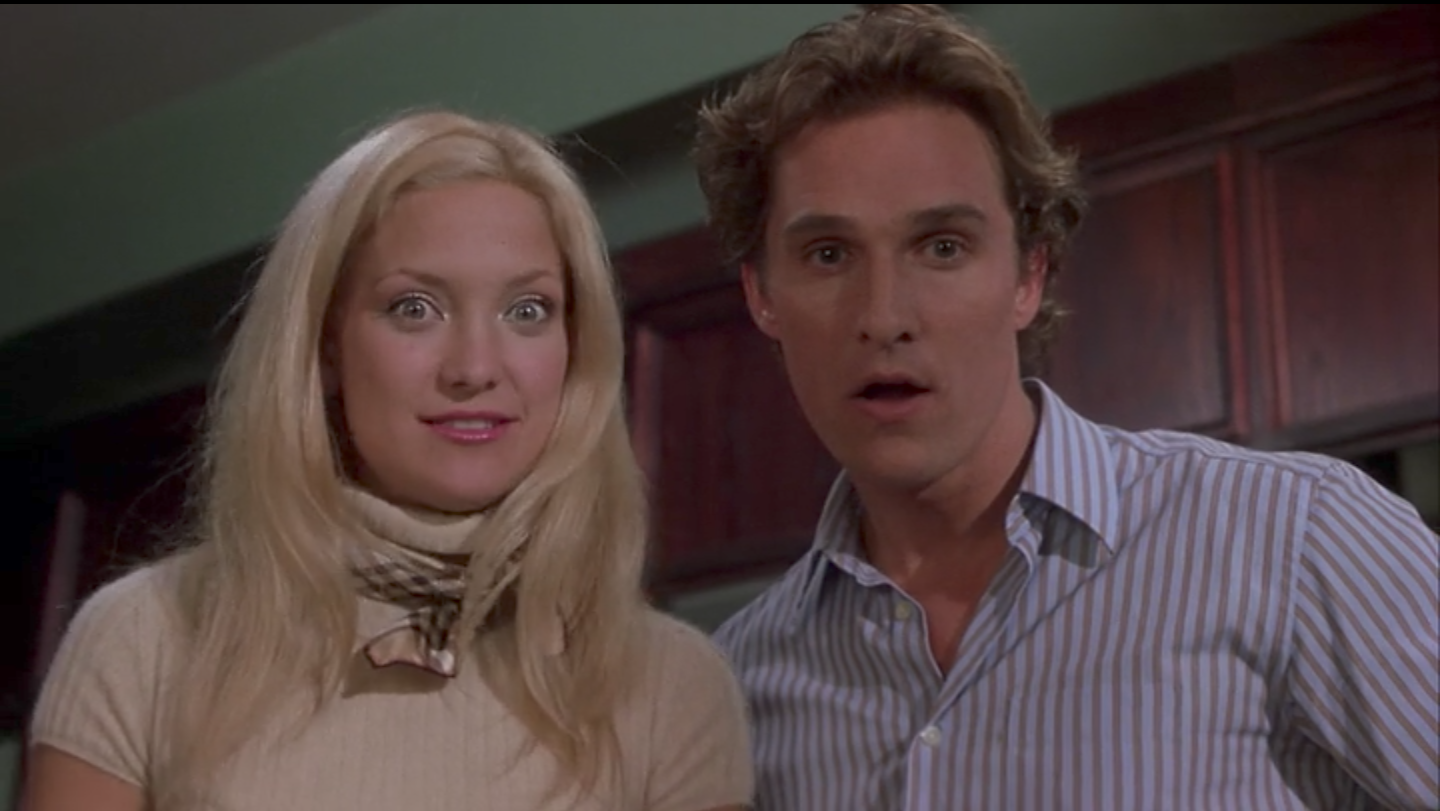 If you were a true betch in the early 00’s then you know you weren’t shit unless you were watching the latest and greatest rom-coms that graced your television screen. And the best rom-com in the early 2000s was How To Lose A Guy In 10 Days, which was arguably a national treasure of its time. It’s been 15 years since the release of the movie—yes, let that sink in, FIFTEEN YEARS because Jesus we are old—and I’m still learning new shit every day from watching it. For example, I don’t need 10 days to lose a guy, all I need is 10 minutes and the mere mention of commitment. *sips wine* In honor of the movie’s 15 year anniversary I’ve decided to re-watch it and gift you all with every thought that ran through my head while I watched it. You’re so welcome. Now, shall we begin?

1. Okay I’ve spotted my first problem with this movie already, and it’s not that this girl somehow managed to get a job at a huge women’s magazine in New York City as a FULL-TIME PAID STAFF WRITER right after grad school. No, HOW did this bitch manage to flirt her way into court side Knicks tickets? I can barely flirt my way into a text back…

2. I’m listening to Matthew Mcconaughey talk to his female competitors, and it’s good to know that 15 years later sexism is still just as much alive and well in the workplace.

3. (But low-key Matthew McConaughey still looks fucking amazing in this. Seriously, gift that keeps on giving on my TV screen rn.)

4. Okay this Michelle girl is a fucking psycho. She cried during sex? Said I love you after two days? If I were Andie I’d ghost her as a friend just listening to that story.

5. This editorial meeting is an absolute joke.

6. 10 dates in 10 days is fucking insane. The only thing I can commit to doing for 10 days in a row is my Netflix account, and even that is pushing it.

7.  Problem #2 with this movie is that Andie thinks she can just “find a guy” at a bar. Well good thing this story is about Andie and not about me, because I’ve been looking for a guy at a bar going on five years now and have yet to be successful. It would make a boring comedy, but perhaps a compelling horror movie.

8. Why is this bar so well-lit? The only way I will speak to strangers when I’m out is under an extreme cover of darkness. Also, why is the median age at this drinking establishment 55? The assignment was for her to find a guy to date, not help him exercise his mid-life crisis. Andie, honey, if you’re looking for bar whose patrons are terrified of commitment then let me introduce you to Hair of The Dog.

9. I can’t believe Andie is just going to ride off into the dark with this absolute stranger. Sober. That’s the real inaccuracy here.

10. LOL he took her to Red Lobster. I know I’ve seen this movie, like, 100 times but I’m still waiting for Ben to creepily insinuate that shellfish is an aphrodisiac.

11. Ben, a white male in advertising, just chose Nelly’s “Hot In Herre” as mood music. I now know why seventh grade me was so attracted to him…

12. Things I whisper to myself when I get a new match on Hinge:

BEN: It’s a marathon, not a sprint

THAYER: A marathon is 10 days?

14. So in order to get a guy to go on a second date with you, you need very expensive basketball tickets? And here I was thinking you could just put out.

16. This entire plaid/khaki ensemble happening on my screen rn is so 2003 it hurts. Also, Thayer continues to kill it with the savage one-liners:

THAYER: You’re a vision in khaki.

Seriously, Thayer, you are a national treasure. Don’t let anyone tell you different.

17. Sooo making a photo album of your future kids with a guy is the equivalent of tagging a him in something on Instagram today? Interesting. One seems crazy and the other just seems like something that should be socially acceptable to do with a person after seeing each other for four months? But idk.

18. Is this her own personal rooftop that Andie and her friends are drinking/sunning on? WITH LOUNGE CHAIRS AND FLORA? And she can afford this on a writer’s salary?? I mean, I too have access to my building’s rooftop but there’s less of a lounge chairs and flora situation happening and more of a potential lawsuits and liabilities.

19. I’m watching this poker game and all I can think is Ben can fit an entire pool table in his apartment and my “bar cart” is an empty bud light box. Similar, but different.

20. The most unrealistic part of this movie is Ben being upfront with Andie about how “crazy” she’s acting. If this were today he’d just never answer any of her phone calls and evaporate into thin fucking air only to resurface six months later between the hours of 2 and 4am.

21. BEN: You have more than enough personalities to keep me occupied

22. This therapist just said the words “positive idea” and “Staten Island” in the same sentence. K.

23. I love that the moment Andie starts to feel emotionally and physically attracted to Ben is the moment she realizes one of his greater strengths is bullshitting other people. It really comes full circle here, doesn’t it?

24. Why does Ben’s family sound like they’re from Texas? Is this what Staten Island people are really like? Is this really where I can find a Southern sounding man who looks and dresses like Matthew McConaughey? Because if so, I’ve been seriously misled about wtf happens in Staten Island.

25. Let me get this straight. The first time they have sex is in his parents’ hall bathroom? Why did I ever find this sexy? Are they full-functioning adults with paying jobs or college freshmen home for Thanksgiving break?

26. She lives in a building with GOLDEN doors and an actual doorman. That rooftop is starting to make more sense, the salary of her profession and current fashion statement of wearing her jeans unbuttoned for the chic-ness of it are not:

27. LANA: Do you see any patches or insignia on my outfit? No? That’s because I’m your boss, not your girl scout leader.

28. 15 years later and I’m still obsessed with this yellow dress.

29. This party is littttt. It’s also making me want to email my boss and ask her why I don’t get to “frost myself” with millions of dollars worth of diamonds at our corporate happy hours. (I only get to sample the house wine.)

30. Ben’s boss keeps asking Andie if she loves Ben and she’s like, “Noooo, I can’t? But I might?” and it’s like, NO YOU ABSOLUTELY CAN’T BECAUSE IT’S ONLY BEEN 10 FREAKING DAYS. And he’s been lying to you this whole time! Because he is a literal stranger to you.

31. Looking back,  “You’re So Vain” was a fantastic song choice for this scene. I’ll make note of it for the next time I want to publicly drag my ex for all the world to see.

32. Wait, this whole time I thought Mike was some huge player and instead he looks like he’d be more comfortable selling Verizon cell phone plans than trying to steal your girl. Are you kidding me with this?

33. Tbh the most realistic part of this whole movie is Michelle taking back a fuckboy with the flimsiest of excuses as to why he stopped seeing her.

34. Wait this is the high-end advertisement campaign they came up with for the diamonds? I have seen more high brow advertising come out of a Forever21 campaign.

35. Looking back, this car chasing scene might be the reason I have trust issues.

36. So let me get this straight. She was leaving New York to advance her career and decided to stay because a guy she’s known for 10 days asked her to? By romantically declaring his “love” for her by yelling “bullshit” at her? Seems right.

37. THEY JUST GAVE AWAY HER LUGGAGE TO A RANDOM CAB DRIVER? Yeah, be prepared to never see those belongings again, sweetie. I have a feeling their first official fight is about to happen 30 minutes after this scene when she realizes he just handed over her laptop to get sold on the black market.

38. Well this movie taught me that the more you push a guy away the more he’ll realize how good he’s got it and will fight for your relationship. Lol KIDDING. Nah, I didn’t learn shit from this movie except that lies are an important step towards accepting love, and that if a beautiful man who works in advertisement approaches you at a bar, it’s because he’s just using you to win a bet. But you’ll be into it anyway. Okay BYE.