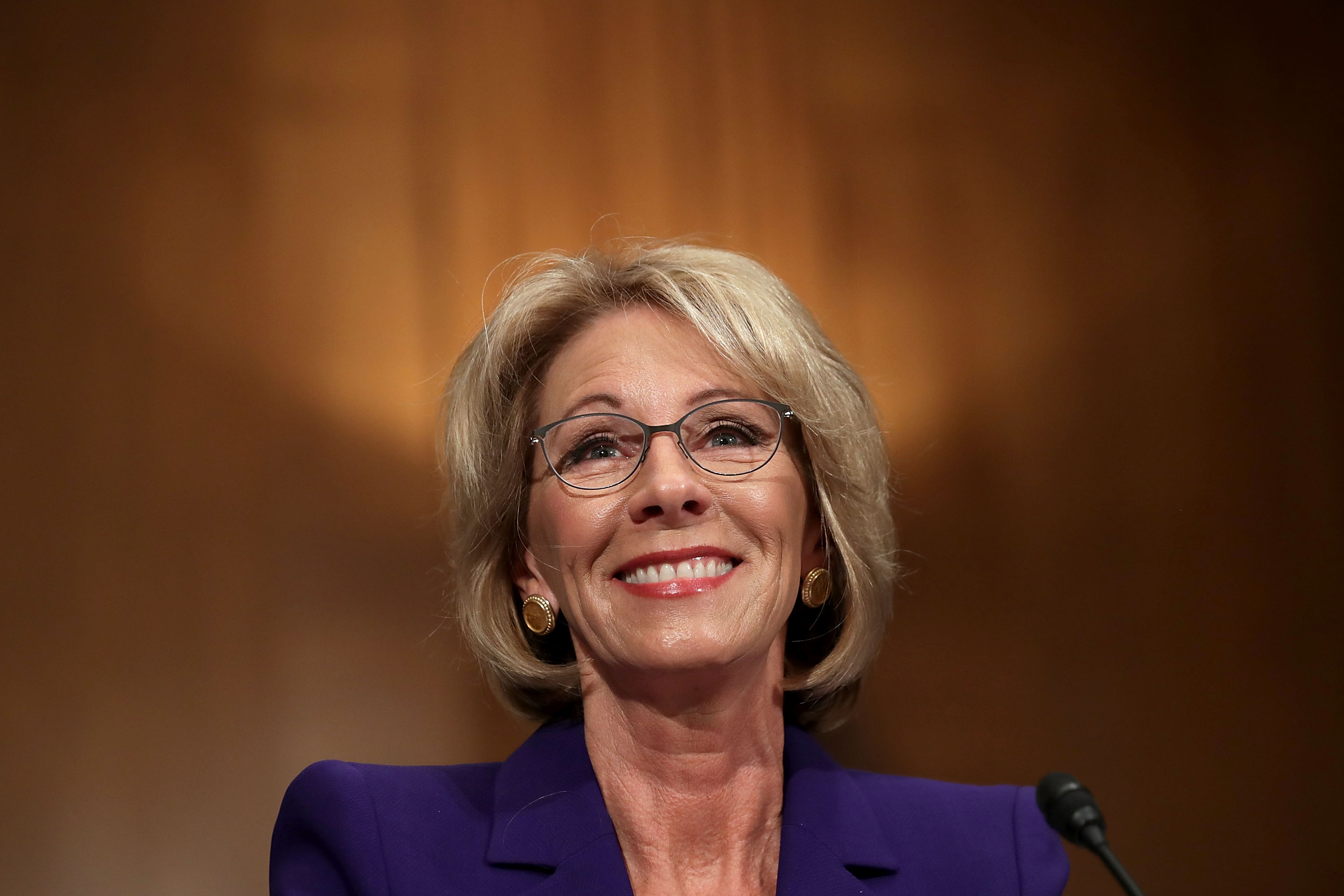 All The People Who Are Suing Betsy DeVos Right Now

Amid the shitstorm otherwise known as current events in 2018, it is easy to focus on impending nuclear war, everyone Trump has ever met being indicted, and the Kardashians influencing government policy to the exclusion of basically all other news. Unfortunately, while that shit might get the most coverage, the few Trump appointees who have managed not to be fired by tweet or indicted for collusion are still hard at work destroying our freedoms. You might remember rich girl and education non-expert Betsy Devos from like, one thousand scandals ago. DeVos is currently heading up the Department of Education, and is at the forefront of dismantling civil rights for students. Apparently, even children are not safe from Republicans’ Regina George-esque affinity for ruining lives. Luckily, American citizens are not having it, and are fighting back via the 2018 liberal clapback – lawsuits, obviously. Let’s dig into all the illegal shit Devos’ Department of Education is currently being sued for.

This March, the Office of Civil Rights, the division of the DOE charged with investigating claims of race and disability-based discrimination, updated their case processing policy. The changes allow the OCR to decline to investigate complaints that the office finds too “financially burdensome” to pursue. According to the OCR, the change is intended to prevent repeat complainants from filing the same claim multiple times, creating unnecessary pressure on the OCR. So basically, the DOE thinks repeated instances of racism in schools are too expensive to look into. Meanwhile, half of Trump’s cabinet members spend hundreds of thousands of dollars on private flights and lavish office furniture. Glad to see this administration has its priorities straight!

In response to these blatantly racist and ableist policy reforms, the NAACP, National Federation of the Blind, and the Council of Parent Attorneys and Advocates are jointly suing the DOE and DeVos herself. According to NAACP spokesperson Malik Russell, not only does the suit allege that the OCR “decided to abandon” its literal mission to “investigate racial, gender or disability discrimination complaints,” but it changed its policy without giving the officially mandated advance notice to the public, which would have allowed groups like the NAACP to attempt to pre-empt the change by pointing out that it’s you know, dumb, evil, and illegal. Wait, a Trump government body didn’t follow official regulations when rolling out a new policy? Color me shocked.

Providing further proof that the vast majority of Trump staffers literally can’t read, a DOE spokesperson told Buzzfeed in February that “restroom complains from transgender students are not covered by a 1972 federal civil rights law called Title IX.” She said this despite the fact that multiple courts have previously ruled that this is exactly what that law does. The DOE staff apparently plans to “consider the legal issues” since being called out, but as that would require a working knowledge of the law, I somehow doubt they will come to any genius conclusions.

Siding With For Profit Colleges Instead of Students

Because Betsy and her fellow Republicans love nothing more than money, it should come as no surprise that her DOE is siding with for profit colleges instead of the students they defrauded. Early in her tenure as DOE head, DeVos canceled Obama-era regulations that guarded students against for-profit colleges that conned students into paying tuition fees without giving them actual educations or useful degrees. A group of students is now suing the DOE for allegedly using their Social Security data to prevent them from receiving government relief on student loans they took out for these fraudulent colleges. Oh and by the way, DeVos herself has invested in the for-profit college industry. No conflict of interest to see here!

If you thought the DOE would be content with ensuring that racial discrimination complaints go un-investigated, transgender students are prevented from using bathrooms consistent with their gender identities, and low-income students have their money stolen from massive companies, you’d be wrong. Betsy’s DOE has also set its sights on dismantling Obama era sexual assault on campus reforms. The Victim Rights Law Center and Equal Rights Advocates are suing the DOE for abdicating their responsibility to protect victims of sexual violence and reinforcing gender stereotypes by implying that women’s sexual assault complaints are not valid.

Remember the Biden video about campus assault that made everyone cry? DeVos thinks that shit is lame, and is obsessed with the due process rights of accused rapists. So to recap, accused rapists and not students of color or victims of assault are definitely the group most in need of legal protection. This one is almost too depressing to make up jokes about.

DeVos called the Obama administration Title IX reforms that protected assault victims and promised them investigations a “failed system,” ostensibly because it failed to be nice enough to rapists. Her DOE also officially rescinded the Obama administration “Dear Colleague” letter, which installed “preponderance of evidence” as the standard of proof during assault investigations and demanded universities begin investigating complaints soon after they are entered. To top it all off, one of her staffers told the New York Times that 90% of assault accusations are made because both parties were drunk. I thought we resolved that being blackout doesn’t mean I asked for it a few years ago, but since Republicans’ ultimate goal appears to be returning us to the 1950s I guess I should shut up and be grateful I can still buy Plan B over the counter.

Thank you, lawyers with moral compasses and actual degrees.

I wish the people in charge of educating our nation’s children appeared to have received more than a 2nd grade education themselves. However, we can take a little comfort in the fact that the repeated public idiocy of DOE officials indicates that the actually educated lawyers taking them on in court can hopefully fucking destroy them legally.