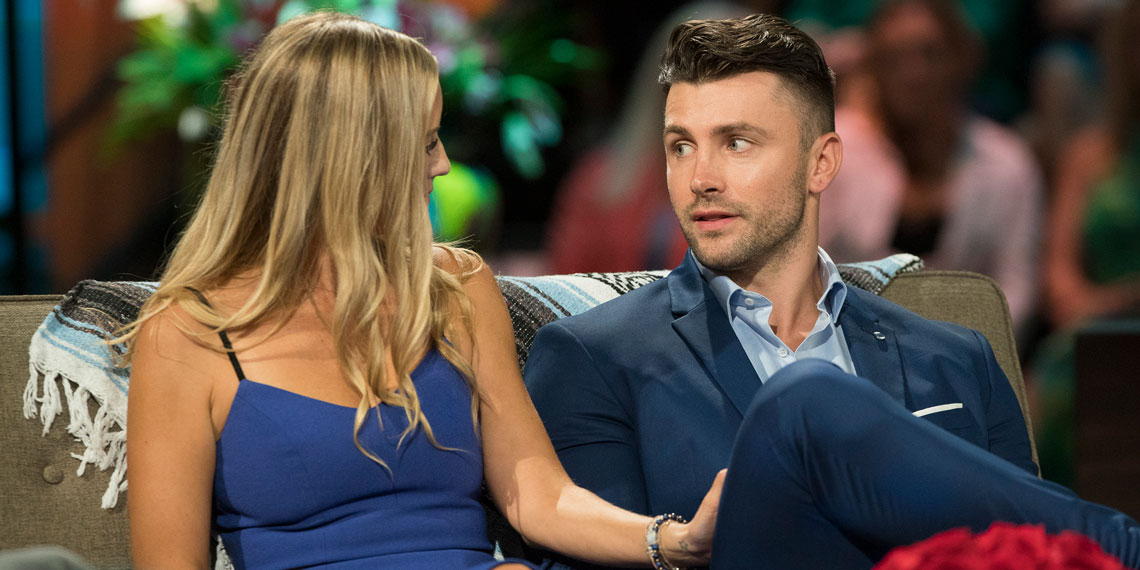 Kamil, Blink Twice If You Need Help: Diggy Moreland On ‘Bachelor In Paradise’

Welp, it’s the last week on the beach! People are tired of swimming, tan lines are way too prevalent, but most importantly, I’m starting to see the same outfits twice. Let’s recap the last week on Bachelor in Paradise for these lovebirds.

Episode 10 kicks off with Shu stating that she’s a good witch. *RECORD SCRATCH* Pick a side, Shu. One day you say you’re not a witch, the next day you’re plugging your broom in to charge. Either way, our minds are made up: You definitely thrive on October 31st.

John finds a date card for American Jordan and Jenna. Jordan, on a date? What could it be? Another f*cking photoshoot. Ever wonder where they get the photos that are already in the frames when you buy them? Stupid shoots like this, that’s where.

Midway through the shoot, they split up to go get changed. Jordan finds a tuxedo, and Jenna has a wedding dress to match. IT. JUST. GOT. REAL. Like a Krispy Kreme with no “Hot Doughnuts Now” sign, Jenna has her doubts. Jordan says something to her about how seeing her on the steps made his heart tingle and that she’s awesome. She buys it, they continue to take more pics only to be used for a good #TBT in 2020.

Then, we get a new arrival on Paradise, Robby Hayes. Don’t worry, within 10 seconds he lets you know about his social media status. Literally, the only people happy to see Robby were me (he owes me money) and the mosquitoes (FRESH MEAT).

He talks to all the girls, and coincidentally, they all have to wash their hair on the same day, so no one is available. Robby tries to entice Jenna to accompany him on a date, but American Jordan threatens to punch Robby in his poof, and deciding it’s not worth it, Robby backs off. Shu momentarily breaks the Kamil trance and says yes to the date with Robby. (Kamil, you can now breathe…if Annaliese isn’t already doing that for you.)

This Shu/Robby date looks pretty miserable, to be honest. I’ve seen more chemistry in the Jiffy Lube waiting room. Robby looks like he’d rather be anywhere else and Shu spends the whole date trying to cast a spell to transform Robby into Kamil. They spend the end of the date dancing, and somehow, with no music, end up offbeat.

New Zealand Jordan is back on the beach, being cautious with Cassandra as they feed each other desserts. (Translation: He’s on a one-way ticket to the friend zone and there are NO refunds). Cassandra is pissed because she’s sick of the only tongue in her mouth being hers, and New Zealand Jordan realizes kissing girls makes him feel good. Have y’all seen Cassandra’s lips? All I’m saying is you wouldn’t have to ask me twice…

Grocery Store Joe and Kendall start to have some lighthearted, but serious convos, and like Michael Jackson, Kendall begins to moonwalk. She says she wants “to sleep on it.” Last time a girl told me she wanted to “sleep on it,” she lit my Peyton Manning Jersey on fire (and NO I’M NOT STILL BITTER). Let’s hope she doesn’t wake up.

Rose ceremony time and everything is pretty much settled except for the Olivia/John/Diggy triangle. Diggy tries to recreate the romance from his date with Olivia by bringing back the same trumpet player to serenade them in hopes of surviving another day to get the opportunity to wear more outfits on the beach. John tries to counter by whispering sweet nothings in her ear: “If you don’t pick me, you’ll have to use PayPal… forever!”

Kendall and Joe pick up where their awkward conversation left off. She said she feels “we” were talking about being exclusive because “we” had to. What’s all this “we” talk? When did you start speaking French? Joe has had his tongue down your throat licking your spine since day two and you’re STILL confused. Joe says he has fruit to pick, and bounces. Kendall says: “Damn, that’s my ride!” and she leaves too. At this point, only one rose is up for grabs and it’s Olivia’s.

Welp, this proves Venmo really is greater than PayPal. Diggy is sent packing with all the tags on his new gear he didn’t get to wear. Don’t worry, he didn’t go home alone. He was serenaded by the same trumpet player that backfired on him. (Had Diggy been thinking, he would’ve grabbed Kendall and said: “Hey I know you’re upset, but can I holla at you for a sec?”)

The next day, Chris shows up dressed like a Miami Vice extra and says it’s REAL DECISION TIME! John and Olivia decide that if it was a real date, they’d definitely go dutch, so no fantasy suites for them. New Zealand Jordan said he liked the friend zone, so he and Cassandra left as pen pals. Robby tells Shu she doesn’t have enough followers for him, so they leave as buds.

Annaliese has ALREADY made the decision for her and Kamil, so the fact that they’re having this conversation is a formality. She pretty much cocks a gun and says: “We’re doing this right?” Kamil nods in agreement, eyes wide with fear.

Chris and Krystal are both on the same page, and something about what they’re going to do in their hotel room tells me there will DEFINITELY be incidentals.

Kevin and Astrid catch us all off guard. Kevin says, “there are things about you and I that I’ve masked.” Astrid isn’t trying to date Batman, so she’s out, and Kevin cries because the sand is too hot to go anywhere and he’s stuck there.

That leaves us with three couples hitting fantasy suites: American Jordan and Jenna, Kamil and Annaliese, and Chris and Krystal. Going into the night, I know one thing: Chris-tal is going to need a safeword. My suggestion: PINEAPPLES!

Episode 11 is historically the BEST episode of the series, and this one doesn’t disappoint. We get engagements, heartbreak, and most importantly, people get to return the clothes they borrowed when they meet up at the reunion.

The finale starts off with Kamil and Annaliese waking up from a night of cuddling and ghost stories in a king size bed. They later meet on the beach to finalize their time in Paradise, in what we expect to be a romantic exchange. WRONG! Annaliese pretty much tells Kamil: “If you don’t propose to me now, I’m putting two bullets in your chest.” Kamil stands up for himself finally and says: “I have a bulletproof vest, shoot away.” No proposal was given, and Annaliese still loves him anyway.

Next up: Jordan and Jenna. Jenna is dressed like Belle from Beauty & the Beast, but it somehow works for her. The entire time Jordan smiles and looks like he’s ready to participate in his first purge. They both give their commencement speeches, and it results in Jordan getting on one knee to ask her: “You gonna help me sell fit tea on Instagram, or nah?” She says: “Yes, for the rest of our lives.” Boom, they’re engaged.

Last, and absolutely least: Chris and Krystal. We start with them the morning after they’ve used their safe word several times. Fast forward to the beach scene. Chris is dressed like he’s about to go on a seven-city comeback tour, and he tells Krystal: “I need help restoring my credit score, and I can only do it with your help.” Krystal is easily amused by shiny things, so she agrees to it.

Okay, back to the juicy stuff…the ACTUAL reunion. John and Olivia end post-show because he’s never done a long-distance relationship. BREAKING NEWS: He’s now dating Chelsea…who lives in Maine…and John lives in San Fran. Not a geography major, but you LITERALLY can’t get any farther apart. Sorry, Olivia, Diggy was probably the better choice since he lives in your own city.

Eric and Angela fought it out. Eric mentions that he was put in the friend zone, and Angela replies: “I don’t let friends put their tongue in my mouth.” If the tongue is “ALL IN” in my mouth, then we’re together. This tiff is followed up by a clash between American Jordan and Benoit about who has the better beard. It’s a tie, you both lose.

Tia and Colton finally hash it out, and they finally realize the only thing they have in common is that they both breathe oxygen and cry watching NBC’s This Is Us.

Flaming Hot Seat Time! We start with the beautiful Astrid. Kevin comes out dressed like Canadian Zorro, gives her a sad song and dance about how he left his jacket with Ashley I. in Winter Games, and that was the reason he wasn’t all there in Paradise. My man is from Canada, where it’s cold in the winter. If he loses a jacket, YOU DON’T JUST GET OVER THAT! Astrid tells him to move to Florida with her where you don’t need jackets. He agrees because he’s tired of living with his mom, and boom, Kevin and Astrid are a thing again.

Kendall approaches the hot seat, hoping not to get burned too much for hurting America’s Grocer. Kendall realizes she made a mistake and flies to Chicago for the deep dish, and not just the pizza. (Side Note: I live right down the street, and they didn’t ask if I wanted any. Rude!) She has a heart-to-heart with Joe, and he pretty much says: “I’m not sure where my love is now, but I think it might be at the bottom of my Instagram DMs. Let me get back to you.” But, he has a soft spot for taxidermy, so he takes her back. Also, since he’s going to be in LA for Dancing With the Stars he might as well have a girlfriend.

Annaliese is up next to talk about how she breathes for her and Kamil. She mentions how Kamil is ready to propose, but not right now. You sure about that? Let’s double check with him. Kamil, you ready to propose?

Kamil: HELLLL NO. My match rate on Bumble is 100% right now, and I can’t give that up.
*Cue Annaliese Tears*

She tells John to send Kamil a Venmo request for the flights, AirBnBs, and decorative soaps that she bought for him since it’s OVER.

Jordan and Jenna take the hot seats next, talking about how they love Carebears and dolphins, and other obvious things. We see video of them making a vision board, but my vision for this couple? A lot of hyphenated names in this future because I see TWO HUGE EGOS.

We round out the last of the Paradise couples by getting an update on Chris-tal. Chris starts crying immediately, mostly because he realizes that due to running around chasing crazy Krystal, his cholesterol is lower. He’s also saving money on his car insurance. (The two are unrelated.) Chris gives a speech about how Krystal has made him a better man by having him shower more often, and he thanks her for it. The two villains worked out…now they can make babies that will terrorize us on Season 24 on BIP.

Welp, it’s been real! Love is in the air and two couples are engaged. Don’t invite me to the wedding, just the reception. Please and thanks. Next up? Colton’s Tears. Excuse me, I meant The Bachelor. Damn, autocorrect.