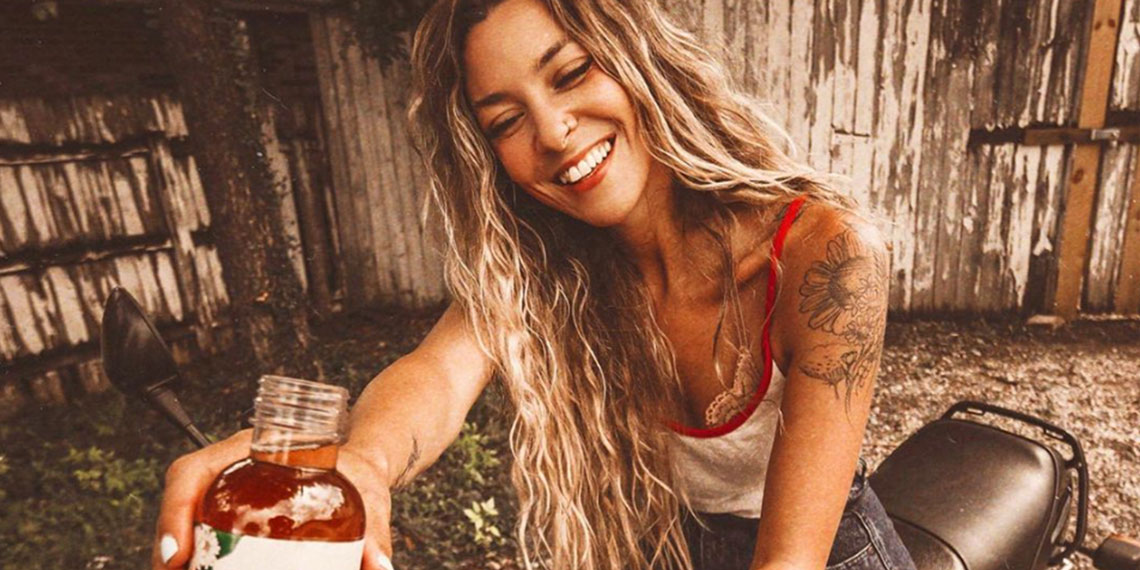 Did This Influencer Fake A Crash For Instagram Likes?

When it comes to getting Instagram likes, you have to constantly up the ante, influencers especially. Whereas once influencers invented and perfected the art of posing in front of a brightly colored wall with one leg bent, foot planted against the wall, that’s not enough. Just like Oscar de la Renta’s cerulean blue, Instagram poses have trickled down from the elite (celebrities and mega-influencers) to the plebeians (everybody else with a smart phone and an Instagram account). It’s not enough to just post a pretty, bright photo of a pretty white girl in front of an aesthetically pleasing backdrop anymore. You have to get creative, which influencers have been doing in perplexing and dangerous ways, from posing at toxic lakes to dangling off cliffs. But Nashville-based lifestyle blogger and Instagram influencer Tiffany Mitchell may have just topped them all when she posted pictures of her motorcycle accident, which some people believe was faked.

Tiffany Mitchell, who goes by @tifforeli on Instagram, posted a now-archived Instagram carousel of herself on her motorcycle. The first picture is exactly what you’d expect from her feed: Tiffany fake laughing, sitting on her motorcycle, holding a helmet.

Sometime after taking this photo, Mitchell apparently got into an accident, and what follows in the carousel are pictures of said accident. Here’s Tiffany lying on the ground, being tended to by her friend Martyn Mazz, who Tiffany says was also riding with her that day. Mitchell wrote in the caption of her now-deleted post that her friend Lindsey was taking pictures of her riding her motorcycle, and continued snapping photos after Tiffany fell.

At first, Buzzfeed reports that comments on the posts were positive, wishing Tiffany a speedy recovery and things of that nature. But then, people quickly pointed out a few things wrong with all these photos. Number one, why did Lindsey continue snapping photos when her friend was clearly hurt?? Have some decorum, Lindsey!

Martyn Mazz posted a photo of him and Tiffany, presumably before the crash, and one commenter asked, “Do you all stage photos of bike accidents for instagram likes often? COOL BEANS.”

Had a lot of fun riding Tennessee’s gorgeous backroads with @tifforelie it got a little scary towards the end but luckily everyone turned out okay. I’ll post some more pics of the ride and what went down soon. Thanks to the amazing @lindseygracewhiddon for her phenomenal ? skills! And of course @jdshuff (and your wife) and @jjamesheritage for being such legends! ✌? #nashville #bmw #motorcycle

Martyn cheekily responded, “ha! We try to get one in every week ?”.

But it was really this photo that rang people’s alarm bells that this photo series may not have been as innocent as it seemed.

That SmartWater placement seems… suspicious. We already know that celebrities do fake paparazzi photos for sponsored content, so is it that crazy to assume that influencers are also hopping on the bandwagon? Look, really nothing would surprise me anymore. Especially when you consider the differences in these photos: Tiffany and Martyn have clearly changed positioning, and the two bottles of water appear out of nowhere. Where did they come from? They weren’t there before, and they’re so prominent in the frame that it seems like an odd, yet deliberate, choice.

People are even going so far as to go back into Tiffany’s post history and comment on other photos of her and her motorcycle. She did one in June that is clearly an ad for Bai, another beverage company, with her motorcycle. Dun dun dunnn.

Happy first day of summer!!! ☀️?? It’s gonna be a magnificent one guys. ? My top 3 absolute favorite warm weather sunshine activities: paddle boarding lake days, trips to the ocean, and moto rides with friends. ??? I hadn’t taken the bike out since last year and oh myyy I missed it so much!! ?? I met up with my adventure sistor @lindseygracewhiddon (she rides too, TRULY grateful for the number of female riders in Nashville ??), and we grabbed some pics while filling up my front tire and sipping @drinkbai. Such a sweet, refreshing, hilarious moment. ? What are your top 3 summer things?! Tell tell! Oh and help me name my bike. I can’t believe she’s still nameless after 3 1/2 years!! ? Leave a comment and I’ll announce my favorite in stories tomorrow!! ? #firstdayofsummer #Baipartner #flavorlife #whyweadventure

A lot of the comments are positive, but some are… not so nice. “What a joke your little photo shoot was. To act like you had a crash with staged shit like smart water bottles, no road rash, your helmet perfectly sitting there without damage. You’re a joke and total loser. Fuck you,” wrote one commenter. “You gonna crash this one with a smart water in hand?” wrote another. Yikes. The bad comments are rolling in, with someone commenting as recently as four minutes ago, “You have NO shame at all.. Total embarrassment.. Do you have ANY idea how many people you offended by LYING to the world about something as serious as a motorcycle crash… ??? The damage is done – your credibility is completely gone..” I have a feeling it won’t be long before this picture gets archived too, and Tiffany stops posting pictures with her motorcycle for a while.

Tiffany Mitchell told Buzzfeed of the Smartwater photo,”Nothing about this was staged. I’m sad that some people are taking it that way, but it’s just not the case,” adding, “I would never turn a very important personal story like this into a brand campaign.” She clarified, “the water was given to me while I was resting.”

She also said, “All motives for taking the photos and sharing them along with the details of the experience were good,” and, “I’m really sad that raising this topic without all the context may inspire negativity and hatred, but I did my best and hope whatever happens can add to people’s lives in some way,” before asking Buzzfeed to not write the article because she did not want to “draw negative attention.” Welp, too late, Tiff!

The question remains: was this motorcycle crash just #spon for Smartwater?

You all know I assume the worst motivations of absolutely everyone I interact with (reasons I’m single), but even I don’t think this is a weirdly veiled Smartwater ad. (Buzzfeed even reached out to Smartwater for comment, but did not hear back at time of publication, which is a huge LOL.) As someone who has been involved with a lot of brand campaigns, especially on Instagram, I don’t see Smartwater, or any brand, aligning themselves with a motorcycle accident. I’m not an influencer, but from the content side, there are typically rules and rounds of approval from the client before you can go ahead and post. In other words, unless influencer marketing is the Wild West, Tiffany would have had to go to the client (Smartwater) to say, “hey I think I’m going to stage a motorcycle crash and then place Smartwater in the photos of the crash, that sound good?” And Smartwater would probably be like “hell to the no.” How do I know that? Because most brands won’t even let you curse in their promo—there’s no way any brand would align themselves with a fake motorcycle crash, unless that brand was Band-aids.

I think the more likely scenario is that homegirl Lindsey is a little tone deaf, and decided to keep shooting even after Tiffany crashed her motorcycle. Then, Tiffany decided to post the pictures, thinking she’d get a lot of praise for being “real” and “relatable”. But the internet is a fickle bitch, and the tides turned on Tiffany. In the game of Instagram, sometimes you win, and sometimes you lose. Tiffany Mitchell lost big time with this post, but she still has over 200,000 followers, so I think she’ll be fine. For now.